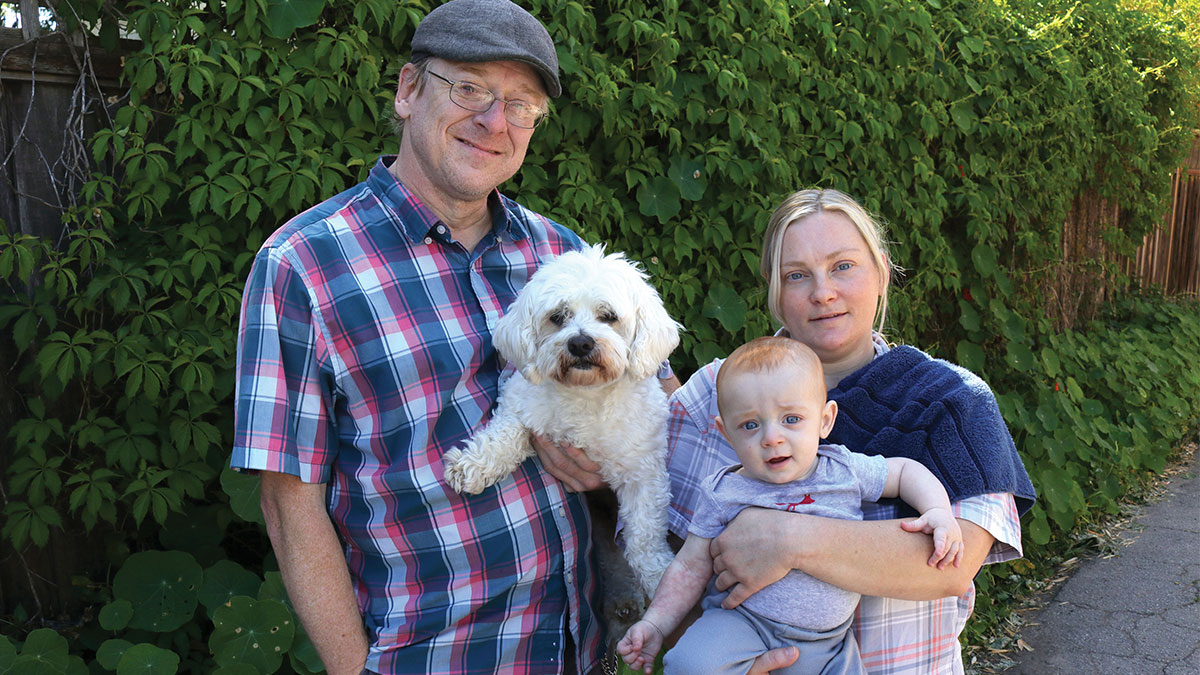 He was a meth addict who “ran amok in the streets of Santa Cruz” for 12 years, as he describes it. One of the stops on his road to recovery was Janus of Santa Cruz, a nonprofit that provides addiction treatment services. Every time he went into a recovery program somewhere, he built on the foundation he established at Janus, he says. Van Nuys eventually beat his addiction and now works at Janus as an intensive outpatient services counselor and DUI educator.

“I can do the most good here, and it is my way of giving back to the community,” he says.

But making ends meet as a nonprofit worker in Santa Cruz isn’t easy, as Van Nuys can attest. He’s currently homeless, living in a van-sized RV in the backyard of a friend’s house with his wife, their 7-month-old child and their dog. He makes enough money that he does not qualify for many types of aid, but there have been several times when his bank account was at $5 for the whole week.

The Human Care Alliance, a collaborative of more than 27 Santa Cruz County nonprofits, is aiming to better understand the living conditions of nonprofit workers like Van Nuys through a new survey. Nonprofit leaders hope the results from the survey, which is currently underway, can serve as a springboard for discussions with county officials about two realities they face: Their budgets are already strapped as they try to pay workers enough to survive with the high cost of living locally, and big budget gaps loom with the state’s minimum wage set to continue increasing until it reaches $15 an hour in 2023. Now, nonprofit directors are wondering whether they’ll be able to find enough additional funding to close the gap, or if they’ll have to cut back on some of the services they provide on behalf of the county.

The new survey results aren’t expected to be released until later this month, but a previous Human Care Alliance survey in 2016 provided some solid numbers on the issue. That survey found that 35% of nonprofit workers had an income that fell below the state’s poverty line. More than 70% of workers surveyed said they had more than one job at least some of the time to support themselves and their families.

The survey also revealed a vicious cycle: Some 61% of nonprofit employees said they required public assistance programs such as Medi-Cal, food banks or food stamps at some point in the previous year to survive.

Raymon Cancino, CEO of the nonprofit group Community Bridges, says he’s on a personal mission to end that cycle.

“I cannot, as a leader, sit back and be complacent to a system that perpetuates poverty,” he says. “If we are alleviating poverty, we cannot be a mechanism that continues to perpetuate it by providing lower wages to our employees.”

Though the Santa Cruz County government has a living wage of $16.65 per hour for its contractors, nonprofits are exempt from the requirement.

Still, given the state’s move toward a $15-an-hour minimum wage, many nonprofits, including Community Bridges, have started putting any new fundraising and revenue toward bringing workers closer to $15 an hour, Cancino says. Community Bridges plans to pay all of its more than 190 workers at least $15 an hour by July 2020. At the same time, it must also increase wages for salaried workers, since state law requires that they make at least double the minimum wage.

In total, those wage increases will create a $200,000 annual budget gap for Community Bridges if its funding levels remain the same, says Cancino.

“So the question is not ‘Do we need more?’ It is ‘Where do we need to invest the dollars that people are willing to invest?” Cancino says.

The county government funds nonprofits in two ways, through one pot of what’s known as “core” funding and through contracts with county departments for specific services.

Core funding for community programs rose from $3.7 million in the county’s 2014-2015 fiscal year to around $4.4 million for the current fiscal year, an increase of 17%. The county also pays tens of millions of dollars each year to nonprofits through contracts, according to county Communications Manager Jason Hoppin, but the exact dollar amount is difficult to tally because the contracts are spread across departments such as the sheriff’s office, health services and mental health.

In addition to increasing funding for nonprofits, the county tried to offer more financial stability by moving from annual funding to a multi-year funding cycle. The county’s also trying to help nonprofits by training them on how to receive more federal and state money, says Santa Cruz County Supervisor Ryan Coonerty. Policymakers see the stress that nonprofits are under, he says.

“Like many other sectors of our economy, they are feeling strained, because while there have been increases in funding, those increases haven’t kept up with the costs of housing and healthcare,” Coonerty says.

The costs of services currently provided by the nonprofits would be much higher, he adds, if the county tried to provide those services itself. “Our nonprofits, by and large, do a really good job of taking small amounts of money and leveraging them and providing excellent services to our community,” Coonerty says.

For nonprofit leaders, that’s part of the issue. That reduced cost for the county comes at the expense of the nonprofit workers, Cancino says, and they end up getting paid less.

Talk is already turning to whether increasing wages for nonprofit workers will mean cutting back on the services they provide.

Coonerty says the world of increasingly limited budgets poses serious challenges without easy answers. Everyone agrees there’s a problem, he explains, but then it becomes a matter of “which services do you cut” to make the numbers pencil out.

For his part, Cancino wants the discussions to ultimately lead to a reframing of the conversation around nonprofit work. “My hope is people start seeing them as not only nonprofit workers but public servants,” Cancino says.

Some of the workers are highly educated employees, Cancino notes, serving as social workers, doctors, clinical therapists, and behavioral therapists. Cancino has heard suggestions that nonprofit workers could enter the private sector in order to make more money. In response, Cancino says that wouldn’t allow many of these workers to fulfill their passion for serving the community’s needs.

Plus, Cancino says, “working in the nonprofit sector should not equal a lifetime of poverty.”