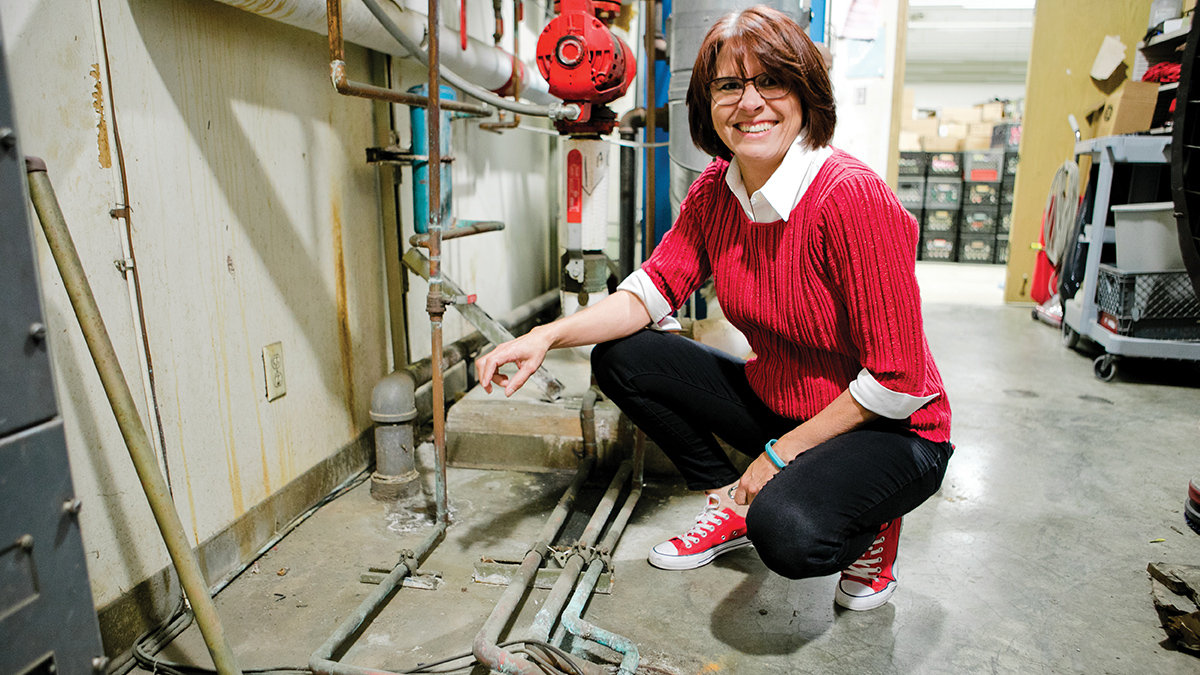 [This is part two of a two-part series on the future of downtown Santa Cruz. — Editor]

The building’s roof is due for replacement. Its fire-safety sprinkler system is incomplete. Much of the structure isn’t seismically safe. Air conditioning is virtually non-existent. The elevators are antiquated. Electrical and plumbing systems are in desperate need of upgrades. Oh, and there’s asbestos everywhere.

“The majority of building systems are obsolete and beyond their usable lifespan,” Jayson told the Downtown Library Council Subcommittee on Thursday, Oct. 2. To top it all off, the library is out of compliance with accessibility rules “too numerous to get into,” he said.

Those findings reaffirmed issues with the current facility that the city’s Downtown Library Advisory Committee (DLAC) had already documented. That group looked at the cost of renovating the current library with funds from a 2016 voter-approved bond measure and determined that it wasn’t worth the money. The committee instead recommended building a mixed-use library from scratch, combined with other uses including a new parking garage—a proposal that quickly turned into a lightning rod in Santa Cruz environmental politics.

After groups like Don’t Bury the Library formed and mobilized against the mixed-use garage, a new council subcommittee formed this year to make sure the city covered its bases.

With guidance from the new subcommittee, Jayson’s firm was tasked with asking a different question: If the city opts to renovate the current library on site, how much benefit could it get? Last Thursday, he revealed his findings.

It wasn’t all bad. With a $27 million budget, Jayson believes Santa Cruz could raze the one-story administrative wings that surround the library, none of which are seismically sound. That would open up the facility and allow for big windows with lots of natural light. The entrance would move from Church Street to Center Street, with an additional entrance from the parking lot next door, which could be reconfigured to allow for better flow.

However, there likely wouldn’t be a teen space or a spot for college and high school kids to study. The genealogical space would get absorbed into another room, like the quiet reading space. Downsizing the office spaces would force the library to rent space elsewhere for administrative purposes. Jayson’s model does not include certain expenses, like the costs of renting a space off-site during two years of renovations, moving the library and its collections or moving everything back after renovations are complete.

There’s little question that—with floor-to-ceiling windows and additional landscaping—Jayson’s renderings portray a project that’s more open and more inviting than the current downtown branch. At this point, there’s a lot of variability in Jayson’s cost model, which his still in draft form; he’ll present a more in-depth estimate in November. But Jayson’s report is already far more detailed than anything the mixed-use library proposal has seen to date. The Santa Cruz City Council had staff halt all work on that proposed project this past spring.

Santa Cruz must finish construction by the time the bonds expire in the summer of 2024. On top of that, construction costs have been rising 8-10% per year. The “good news,” Jayson says, is that will likely go down to 5-6% a year. Taken together, all of this means that Santa Cruz can’t put off its decision much longer, he explains. Santa Cruz has to make a decision on the future of its library.

Here we’ll lay out three basic options the city has for the future of its main library and downtown parking:

1. BUILD A NEW MIXED-USE LIBRARY WITH PARKING AND HOUSING

Last fall, under a previous political majority, the City Council approved for Santa Cruz to proceed with plans a mixed-use library that had several layers of parking and affordable housing above it—all slated for the lot on the corner of Cedar and Cathcart streets.

Per council direction, the six-story project would have had a 24-hour bathroom, and staffers were looking into ways to move or preserve existing magnolia trees that currently tower over that lot, which is home to the farmers market.

And as directed by the council, staff was studying ways to “future-proof” the garage—for instance, so that if parking demand dropped, levels of the garage could be converted into other uses, like housing. Part of the plan was to redevelop old parking lots. If the parking supply was too high, Santa Cruz could start redeveloping even more. The city could also reuse the library site for another use, like affordable housing. The council placed the project on hold this year after a new majority got seated. According to a 2018 estimate, the library and parking portions of the project would come out to a combined $64 million.

Were the city to revive this plan, the City Council would likely move the farmers market site one block away to Front Street, where the market could get a permanent pavilion.

Instead of relocating the market to Front Street, one idea many garage opponents have been pushing for is to create a brand new pavilion plaza at the current farmers market site on Cedar Street. That spot gets less car traffic and more afternoon sun than the Front Street lot.

Members of the group spearheading this idea, Downtown Commons Advocates, also support renovating the library at its current location.

There is, however, a potential contradiction inherent in this vision. It’s clear is that critics of the parking garage have asked tough questions challenging assumptions about the demand for new parking. Transportation is changing, they say. Who knows what the future will bring?

Here’s the issue, though: If there’s as much uncertainty in transportation as critics like to claim, it’s a big leap to go from questioning the need for a new garage to expressing confidence that Santa Cruz can spend parking surplus revenues to start taking spaces away, and ultimately do so without dealing a crippling blow downtown businesses. It’s one thing for environmentalists to suggest that the city’s transportation downtown models might not pencil out. But activists’ own alternatives have yet to face much scrutiny.

Bear in mind that downtown already has hundreds of parking spaces in other lots ready to be redeveloped into better uses, and also that city leaders expect that downtown Santa Cruz could support 600 new units of housing over the next decade, as well as new retail spaces to go with it. Those housing figures are estimates from economic development and planning staffers, based on potential projects that are in various stages of planning. And there’s no reason why the city, which is in the midst of a dire housing crisis, couldn’t raise the bar even higher in order to meet its housing production goals.

Given that the City Council has killed a plan to zone for higher densities on major transit corridors, councilmembers could, for example, plan for more housing downtown, where dense housing projects generally face less opposition.

The debate over common spaces downtown goes back at least 30 years. Shortly after the 1989 Loma Prieta Earthquake leveled much of downtown, many progressives wanted the City Council to create a new public plaza. One of the quake’s many casualties, after all, was the Cooper House—once home to a bar, restaurant, shops, live music, and community gatherings. In the decades since, that debate never really went away.

Today, many fans of Abbott Square Market, which opened two years ago, see the new food court as a vital community space that fills the void left around the corner, where the Cooper House fell.

But members of the Downtown Commons group still long for a different kind of public space, one divorced from the commercial elements of brick-and-mortar retail.

3. RENOVATE LIBRARY, KICK THE PARKING CAN DOWN THE ROAD

If there’s one skill that various iterations of the Santa Cruz City Council over the last decade have mastered, it’s punting.

It’s understandable, in many ways, that councilmembers would struggle with making difficult decisions on a tight turnaround. From where they sit on the dais, they hear polarized community members—many of them living in different realities from one another—arguing their political views in meetings two or three times per month. Councilmembers can do their best to dig down into the underlying truth behind the town’s most contentious issues on their own time, but the fact remains that these electeds make less than minimum wage when they put in 40 hours of work per week—something they often do.

As always happens in Santa Cruz during times of gridlock, I’ve heard chatter lately about trying to get creative with out-of-the-box compromises and find different sites for a new library. But after so many delays, there is not enough time to go down new rabbit holes. At this juncture, the brand new library project and the parking garage are inextricably linked. The downtown commons and the library renovation, however, are not.

It’s worth noting that the Downtown Library Council Subcommittee, which has been meeting since early summer, has been focusing mostly on the library aspect of the project, less so than on the parking. I have not heard anyone advocate for this idea, but if the council buys arguments about the uncertainty in the future of transportation, it could proceed with renovating the library without taking action on the parking lot and without doling out the parking revenue that it might otherwise spend on the garage. It could, for instance, create a new advisory committee to study the future of parking demand and the possibility of a new garage.

If, however, the city does decide that a new parking structure is needed in the future, Santa Cruz would be hard-pressed to find a first-floor tenant that brings as much public benefit as a full-sized downtown library. Also, the financing could be different without the library funds to share in the expenses.

And in the meantime, construction costs will likely keep going up.

Next ArticleThe Rebirth of Santa Cruz’s Court of Mysteries