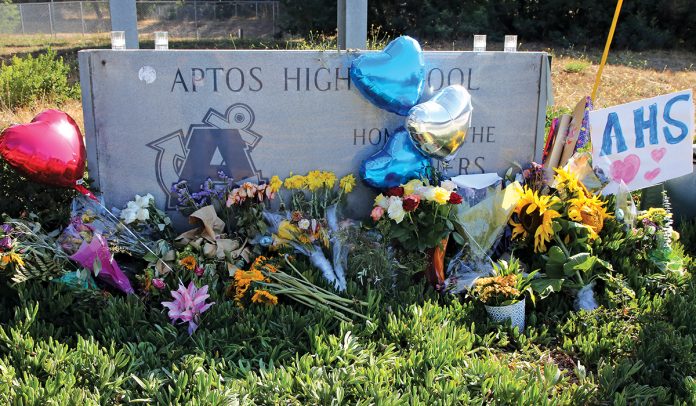 APTOS—The family of the 17-year-old boy who was stabbed to death on the Aptos High School campus in August has filed a claim against Pajaro Valley Unified School District, alleging that the district was negligent in ending the School Resource Officer (SRO) program, and in not adequately monitoring the two students responsible for the attack.

Legally, plaintiffs must serve a claim before filing a lawsuit. PVUSD has 45 days to respond.

In the Dec. 28 claim, attorney Charles “Tony” Piccuta states that the school saw an increase in violence and fights after the PVUSD Board of Trustees ended the SRO program last year.

One of these fights involved a 14-year-old student referred to in the claim as K.O.—who was already on probation for a violent crime—and who had also pulled a knife on another student weeks before the deadly attack.

But that incident was not reported to law enforcement or child protective services, Piccuta states. Instead, the 14-year-old was suspended for two days and then returned to campus.

On Aug. 31, K.O. and another student attacked the 17-year-old student, referred to in the claim as G.S. He was airlifted to a trauma center, where he died.

Citing pending litigation and student privacy rules, PVUSD Superintendent Dr. Michelle Rodriguez declined to comment on the specifics of the claim. But in a statement, she said, “We remain heartbroken by the tragic death of our Aptos High School student, and our prayers remain with his family.”

“The entire PVUSD community shares in their grief and sadness,” Rodriguez stated.

Rodriguez says that the claim will be reviewed by the board at an upcoming meeting.

The board canceled the SRO program in July 2020, citing input from community members, who said that having a law enforcement official on campus intimidated some students. They also say that a law enforcement response—rather than a socio-emotional one—was the wrong approach in dealing with at-risk students.

But following the August incident, the board reversed its decision and brought the program back to Watsonville and Aptos high schools by a 6-1 vote, with trustee Maria Orozco dissenting. The SROs are now paired with a mental health clinician.

Both suspects are thought to be involved with criminal street gangs. K.O. has been charged with murder. The other suspect is facing assault charges. Both also face gang enhancements.

Piccuta says that, at the time of the attack on G.S., district personnel, including at Aptos High, were aware of the recent increase in violence, and that the lack of supervision contributed to the attack.

“PVUSD and District personnel had a duty to supervise students, including G.S., on campus at Aptos High to regulate their conduct and for their protection,” the claim states.

Piccuto also states that the harm to G.S. was “a foreseeable consequence, given the history of violence in the district, including at Aptos High.”

Among the allegations outlined in the claim, Piccuto states that the district failed to approach and investigate the suspects as they “lingered suspiciously on campus waiting to attack G.S.”

In addition, the claim states PVUSD did not hold K.O. accountable for his previous incident involving a knife, failed to monitor the campus and failed to adequately train staff to supervise the campus.

Finally, the district did not report the previous incident with the knife to the proper authorities, according to the claim, which allowed the suspect to remain on campus.

G.S.’s parents are seeking damages for the loss of the “love, companionship, comfort, care, assistance, protection, affection, society and moral support” he would have provided, along with the contribution he would have made to the household.