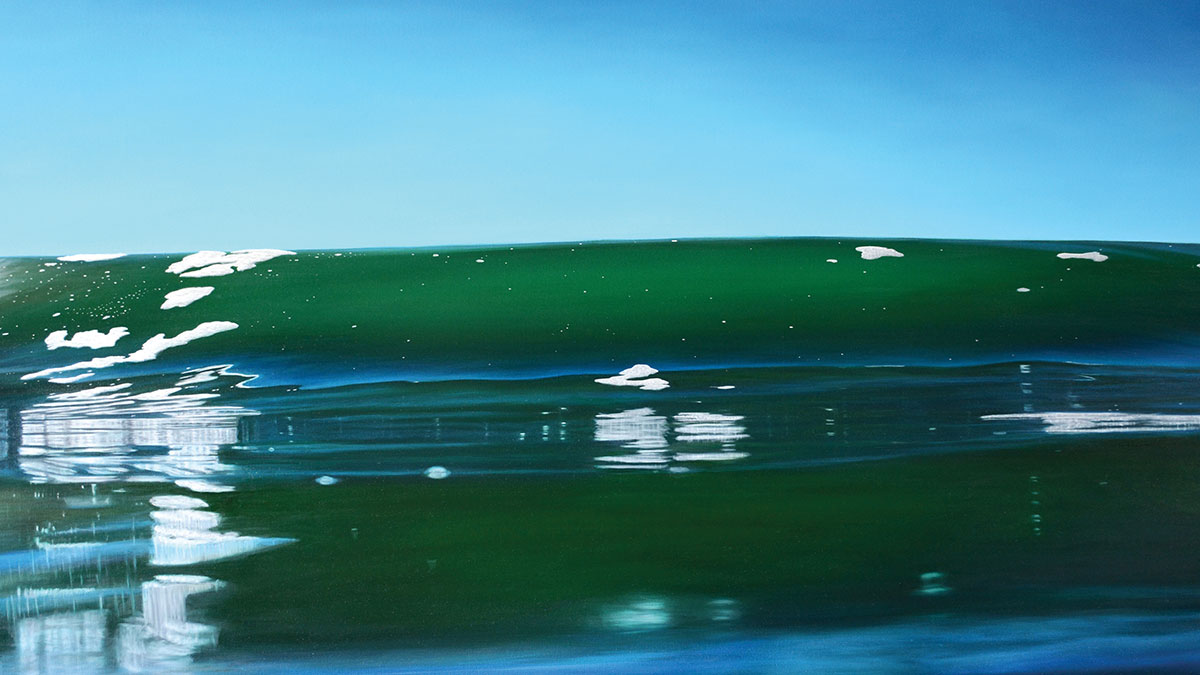 F.J. Anderson is both a painter and photographer, but there’s no guarantee you’ll be able to tell which is which when you look at his art.

Most people can’t, initially, hence the signs denoting “oil painting” at his shows. With a background in scientific illustration and a passion for the ocean, his realistic wave and landscape works embody Santa Cruz surf culture.

Just don’t ask him if he surfs.

“Last weekend at the Sausalito Art Festival, I got asked if I surf probably 100 times. Every time, I was just like, ‘yeah,’” Anderson shrugs. “People are surprised, too, when they see my work, then see me sitting in my chair. They are always like, ‘You did this?’ I guess it’s because I’m young, I don’t know.”

A lifelong Santa Cruzan from a family of creatives, Anderson has been painting and drawing his whole life, working his way up to a successful full-time career from his idyllic beachside bungalow. He will work on anywhere from eight to 10 paintings at a time, jumping between series and sometimes revisiting old works in progress. He’s recently started a new, more abstract motion-based series that, unsurprisingly, still closely resembles the ocean and waves.

“I’ve always been drawn to realism, I think just because I was good at it growing up,” he says. “There’s a lot of planning involved and experimenting with color and layers, so it’s kind of hard to decide when I’m done. Sometimes I could just fiddle with something forever.”

In the first part of his process, Anderson will go out bodysurfing with a waterproof camera. Blacks Beach is just a hop, skip and jump away, so he messes around in the waves there and gets photos to enlarge and use in a painting. He says one of the main reasons he’s drawn to realism is the challenge of copying a photograph.

“I have to approach each painting differently, so it keeps it interesting. Also one of the most satisfying parts of being an artist is experiencing people’s reactions to my work,” he says. “It’s always inspiring when people have an emotional connection with my paintings.”

Every new painting starts with a thick bright red or orange base color, which comes as a bit of a shock considering Anderson deals in mostly soft blues and greens. But he says it’s all about the layers, and will leave nothing more than proof flecks of red and orange around the canvas sides as he layers different colors, hues and notes across the canvas.

“A lot of my clients have said they need to buy a certain painting,” Anderson says. “Sometimes they tell me they don’t exactly know why, but feel a connection [to a painting]. Maybe because humans are mostly water, so it’s an unconscious attraction? A lot of other people say they make them feel calm and comforted.”

Anderson is one of 300 Santa Cruz County artists participating in Open Studios next month, and after a long month of sales at the Sausalito Art Festival and Capitola Art and Wine Festival, he’s preparing paintings, prints and illustrations for another big event.

“I’ll be showing my work at my parents’ house. There just isn’t enough room in this place to show everything,” he says. “I might have a sale on some old series stuff, sort of an out-with-the-old, in-with-the-new. I have work everywhere, my house, my parents’ house, my closet, it’s time to try and move it along.”

Anderson’s work will be on show at Open Studios Oct. 6-7 and 20-21. For more information, visit fjartwork.com and santacruzopenstudios.com.

Previous ArticleFilm Preview: ‘We the Animals’

Next ArticlePreview: Hiss Golden Messenger to Play the Catalyst