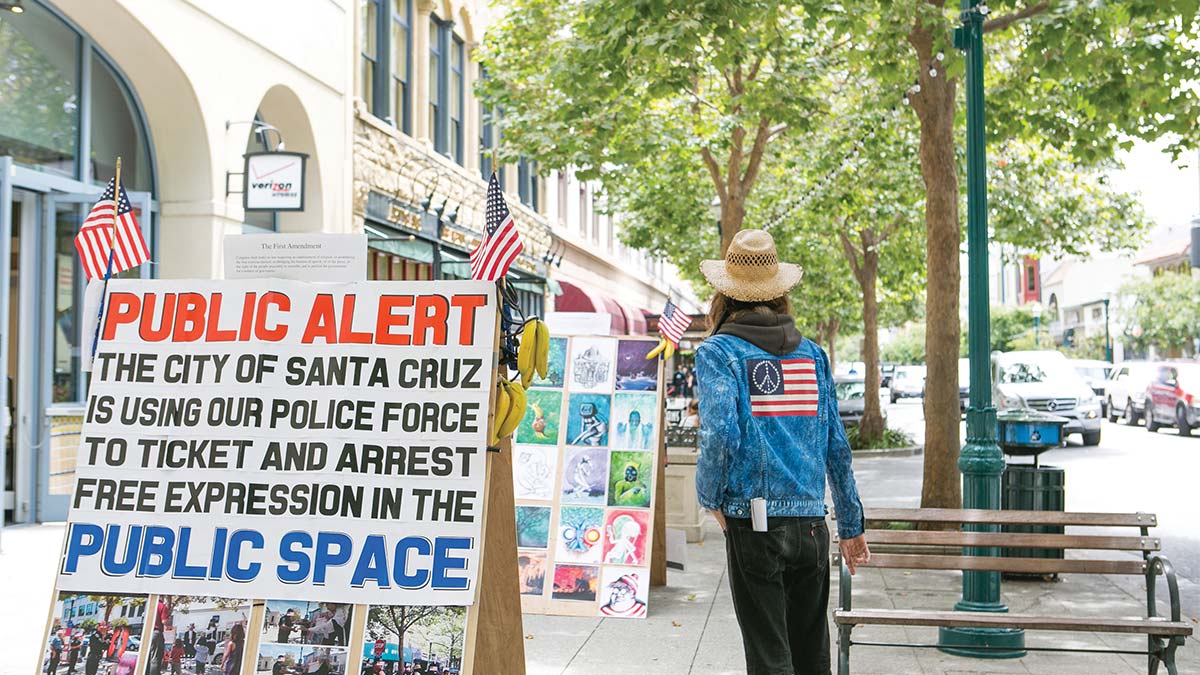 Standing beside a folding A-frame plastered with experimental art pieces and protest signs on Pacific Avenue, artists Alex Skelton and Joff Jones have spent endless hours downtown suggesting passersby stop to check out their art or maybe even make a donation that will help them afford to stay in Santa Cruz. Their trippy psychedelic art features subjects ranging from the pastoral to pop culture—nature, a shipwreck, even the cartoon character Waldo.
But in the last year, they say they’ve had no choice but to shift focus, and their creative sides have taken a back seat to their activism. Skelton and Jones have been arrested three times since July of 2015, each time for refusing to sign a citation issued to them for distributing artwork outside of an exempt zone on Pacific Avenue.
There is no need, they argue, for the 27 blue-marked zones that dictate where artists can and can’t set up—since, they say, it is their “constitutional right” to display their artwork in a public space. “Restrictions are meant to keep people safe. There are already laws in place to deal with obnoxious people disturbing the peace and aggressive panhandlers,” says Skelton, beside a picture of a person with a television for a head.
But that isn’t how the First Amendment works, according to City Attorney Tony Condotti. He defends the city’s policy, saying Skelton’s rights are not being violated, because it’s within the city’s right to place restrictions on the time, place and manner in which these First Amendment activities take place.
“There are numerous places available for people to engage in freedom of expression,” says Condotti. “It only regulates the locations that they set up, so that they don’t obstruct the sidewalks and clutter up the streets.”
Outside experts, too, seem to agree that there’s nothing unconstitutional about what the city’s doing, as long as it provides enough space for artists and activists. “Sidewalks and streets are public forums for speech. But cities may have time, place, and manner restrictions that serve an important government interest and leave open adequate alternative places for communication,” UC Irvine Dean of Law Erwin Chemerinsky tells GT, adding that he doesn’t know the specifics of the city’s setup. “Generally this would be allowed so long as there are adequate places available for the street performers.”
The exempt zones are a fairly new concept on Pacific Avenue. They first hit the street in December 2014, in the wake of a controversy over beloved accordionist Frank “The Great Morgani” Lima, who temporarily retired from playing the mall after being threatened with a $300 ticket. A total of 63 color-coded spots were marked along Pacific—yellow for performing, red for vending, and blue for either. This spring, the Santa Cruz City Council voted unanimously to ban commercial vending entirely, and there are now 30 blue boxes for performing and selling original artwork.
Because Skelton and Jones are artists, they won’t be affected by the commercial vending ban—or at least they wouldn’t be if they wanted to sell their paintings in the designated spots, something they refuse to do.
They were first arrested on Aug. 20, 2015, after refusing to sign a citation for not being in an exempt zone, instead promising to appear in court.
“My mom told me don’t sign anything unless you know what it means,” Skelton says. The Santa Cruz Police Department took them into custody, booking them into jail as per police protocol.
Skelton and Jones have mastered the skill of garnering attention for their cause—dressing up as Founding Fathers after their first arrest, and as television reporters at another protest. During their third arrest on May 1, a friend videotaped when 11 officers showed up, and the video now has more than 32,000 views on Facebook. In the two months since, they’ve continued to set up outside of exempt spaces, and haven’t had any interaction with law enforcement, aside from “casual waves” from cops, they say.
Assistant city manager Scott Collins says the exempt spaces are meant to establish a balance between freedom of expression and commercial and pedestrian activity. He says they were originally established because of complaints from people saying they “didn’t feel comfortable walking on the sidewalks,” since they were cluttered with people panhandling and fighting over popular locations.
“It’s not like we’re seeking to turn into Los Gatos, where there is no freedom-of-expression activity. A lot of people like coming here for these activities and performers,” says Collins.
Skelton, who’s 34, has traveled to dozens of cities, ranging from Seattle to Berkeley, to sell his art—or, as he says, “share my personal ideas with people through art.” He says he’s never had a police officer threaten to cite him outside of Santa Cruz.
It may actually be a misconception, though, that the City of Santa Cruz is somehow more restrictive than other places. In Seattle and Berkeley, for example—both considered liberal, artsy communities—it is illegal to distribute artwork, or engage in any other vending, in a public space without a permit. Applicants are screened first, and then awarded a permit. In Santa Cruz, there is more flexibility; all one has to do is situate themselves within an exempt zone, within a one-hour time limit.
Collins says says the time limit for each zone provides everyone who wants to display their art or perform a level playing field, and that people can’t stake claims to “hot spots.”
Skelton argues the time limit is “ridiculous and unnecessarily restrictive,” but concedes in his five-and-a-half years setting up on Pacific Avenue, he’s only ever been asked to give up his space once, and he found another one down the block.
Condotti says that Jones and Skelton persistently trying to get arrested creates a drain on city resources. And, in a way, the activists agree.
“They [the police department] don’t seem to enjoy using their time this way. It’s a waste of their time and resources,” says Skelton. “We’re just showing people pictures and talking to them, and the city’s making that a crime.”

Previous ArticleCutting Back on Crumbs

Next ArticleHigh Marks for Soquel Vineyards