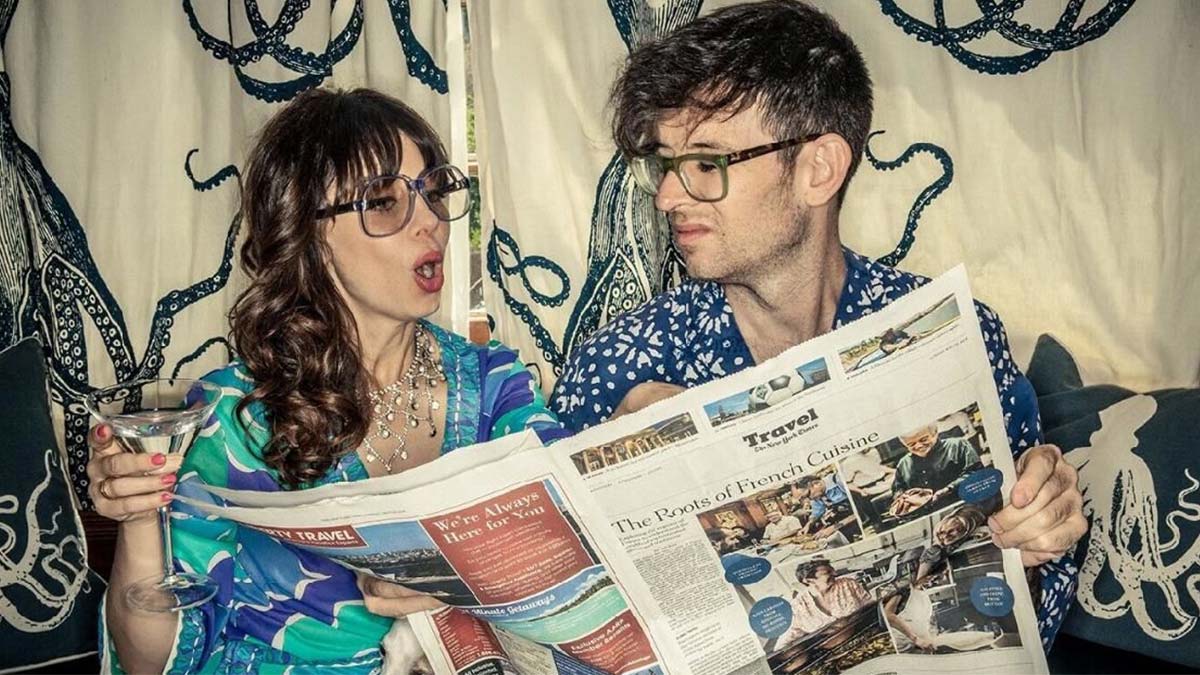 There’s a natural rhythm to the way newlywed comedians Natasha Leggero and Moshe Kasher communicate. Something floating in the nuance that makes it hyperreal and on point. Remember the way Elaine May and Mike Nichols rolled out improvised conversations that at once seemed completely normal, but, on slightly closer inspection, were riddled with dark humor? That same spirit, of couples collaborating to subvert a dominant paradigm, infuses the work of Leggero and Kasher. While they may not yet be household names, their upcoming show in Santa Cruz will be undoubtedly unforgettable.
Making his name in San Francisco clubs in the early 2000s, Kasher was a darling of the Bay Area comedy scene. A spirited youth whose childhood was like something out of Dickens—deaf parents, stays in mental institutions and an early exposure to drugs and alcohol—forged a tempered spirit in him. A unique stand-up comic, Kasher’s crowd work borders on shamanism. Now in L.A., he is writing and executive-producing a new television show for Showtime, based on his 2012 memoir Kasher In The Rye: The True Tale Of a White Boy From Oakland Who Became a Drug Addict, Criminal, Mental Patient, and Then Turned 16. Directed by the Russo brothers (Captain America: Civil War, Arrested Development), it’s a sign of how fast Kasher’s career is accelerating.
Natasha Leggero is also hitting a wider and wider demographic. Her appearance on the Comedy Central roast of James Franco showed her to be the heir apparent to snarky comedians like Joan Rivers and Sandra Bernhard. A smart and sharp wit informs her comedy, with an “I’ve seen it all before” persona. She’s also the co-star, writer and director of Comedy Central’s Another Period. A scathing commentary on today’s celebrity-obsessed culture, the Victorian-era comedy features guest cameos from stars like Jack Black and … Moshe Kasher.
“I’m a co-executive producer on that show, as well,” says Kasher. “And it’s for no reason connected to our marriage. It’s based solely on my talent.”
The comedy power-couple married last October and, partly inspired by the story of a couple that took a 15-year honeymoon, has embarked on a three-week “Honeymoon Tour” of their favorite cities.
“Santa Cruz is one of the shows we are most looking forward to,” says Kasher. “We have some typical spots we are playing like Portland and Oakland and Austin, places we would go on any tour. But Santa Cruz is the fun spot for the Honeymoon Tour.”
“We love burritos,” says Leggero.
“We love burritos and surfing,” agrees Kasher. “I have a technique of surfing where I get on the board and then I fall over immediately and I get scared and I go to the beach and I think about how old I am.”
“Moshe likes to surf,” says Leggero. “He’s stood up on a board a couple of times.”
While Leggero’s stage performance is adorned in silk and perfume and pearls, Kasher’s proto-Mad Max attitude is rubbing off. While difficult to imagine, Leggero went to Burning Man.
“I forced her to come, and she almost had a good time,” says Kasher.
“It’s a great place to go breast feed your pet ferret,” says Leggero.
“She had a good time,” Kasher insists. “It’s part of her persona to not enjoy things. But she had a great time pretending to be better than everyone.”
“It’s not just my persona that doesn’t enjoy dust storms and no food,” she retorts.
Don’t let all that snark fool you, though. Behind it, these two have big intertwined hearts that will woo you, wow you and make you laugh. Like when Leggero finally admits she liked the ecological aspect of Burning Man.
“Everyone brings their own cups, plates and silverware. You begin washing your dishes with 10,000 other people, and you realize you’re part of a community. And to leave a place like that with no trash made an impact on me. That was my strongest take-away,” she says. “Why can’t we live like that all the time?”

The Honeymoon Tour with Natasha Leggero and Moshe Kasher stops in Santa Cruz at 8 p.m. on June 6 at the Veterans Memorial Building. Tickets are $25 on brownpapertickets.com.