.Backed by Report, Advocates Ask for Safe Pesticide Use 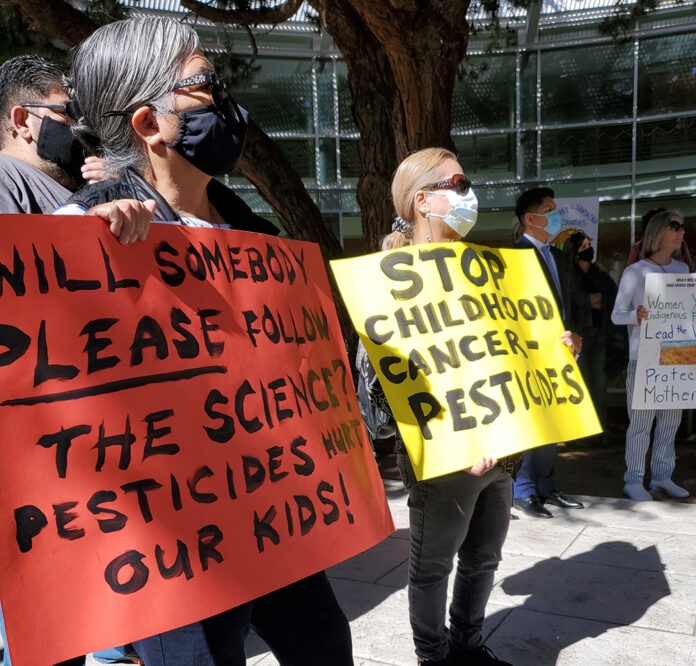 SALINAS—Nurses, teachers, labor leaders, elected officials and concerned residents held a news conference and rally with more than 50 supporters at the Monterey County Government Center on Oct. 26 to release a report revealing extensive use in the Monterey Bay area of 13 pesticides linked to childhood cancers.

Organized by Safe Ag Safe Schools (SASS), the group called on state and local governments to restrict the use of the pesticides, and post warnings to the internet before they and other hazardous pesticides are used.

Specifically, the report revealed regular use in Monterey Bay of 11 out of 13 pesticides identified in two recent studies by UC Los Angeles that researchers linked to early childhood cancers.

They found that the pesticides increase risk of a child developing specific forms of cancers ranging from 1.60 times (or 60% increased chance) to 3.38 times (or 238% elevated risk), if their mothers lived within 2.5 miles of the pesticide application while pregnant, SASS said.

“We must break the cruel pattern of neglect by DPR and the Ag Commissioners and demand they protect our children,” said United Food and Commercial Workers Local 5 Ag Division organizer Efrain Aguilera of Greenfield. “That begins with stopping pesticide secrecy and ends with stopping the use of all pesticides that harm children.”

More than 28 countries have banned or not approved 10 of the 13 pesticides.

The first UCLA study from 2020 examined correlations between pesticide exposure and childhood leukemias. The second article from earlier this year looked at pesticide links to childhood brain tumors.

The links between cancer and pesticide exposure have been major topics for decades. However, what is new about the recent studies is that they are California-specific, provide correlations of individual pesticides to specific childhood cancer subtypes and establish links to in utero exposure over a long distance—up to 2.5 miles from the pregnant mother’s residence.

The California Department of Pesticide Regulation (DPR) was allocated $10 million in this fiscal year’s state budget to bolster the dissemination of information regarding the application of pesticides in area farms.

This week, DPR held two webinars to hear from the public on the development of the statewide system that would notify the public in advance of pesticide applications near where people live, work or play.

“Our goal is to increase transparency and provide equitable access to information about pesticide applications,” said DPR Acting Director Julie Henderson. “This will provide an opportunity for the public to make their own decisions about additional health precautions they want to take to protect themselves and their families. We believe this is also an opportunity to strengthen the engagement between DPR, County Agricultural Commissioners and the communities we serve.”

Information is available on DPR’s website or at www.cdpr.ca.gov.