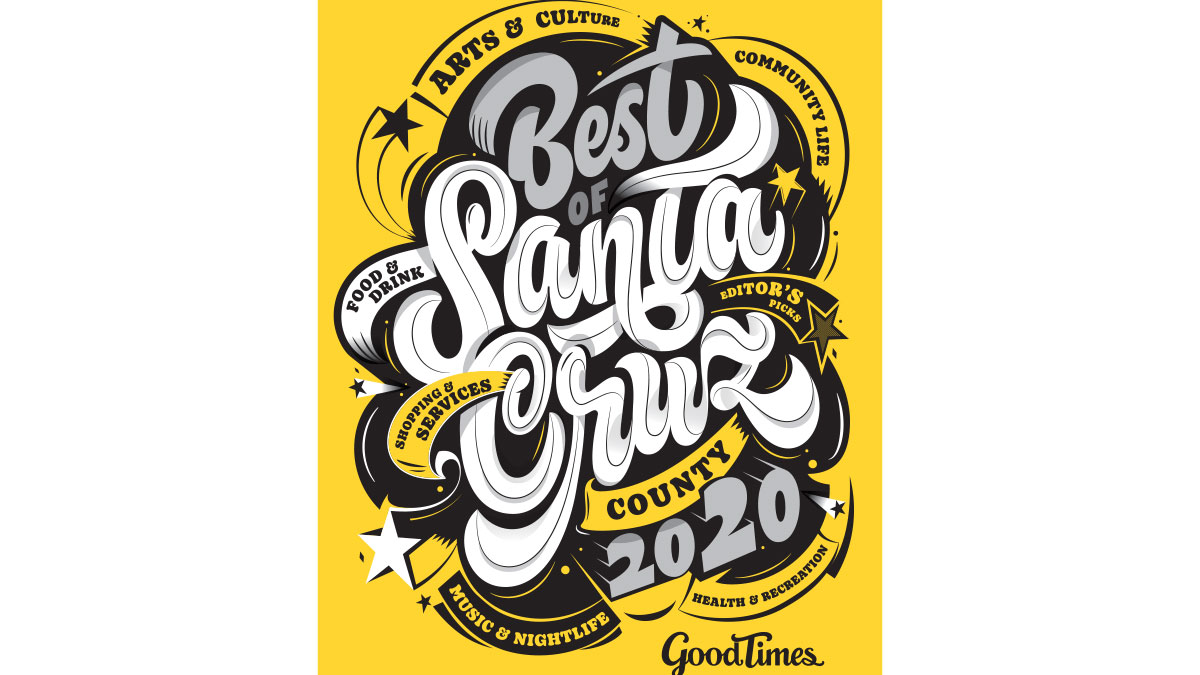 Welcome to the very first Best of Santa Cruz magazine!

Good Times has been tracking the best people, places and things in this area for decades now, and as the issues kept getting bigger and bigger every March, it became clear it was time for an upgrade. Plus, it always seemed crazy that our most in-depth, comprehensive guide to Santa Cruz County came and went after just a single week on stands. Despite that, I’ve had so many people tell me that they save the Best of Santa Cruz issue and use it as a guide all year long, and now this magazine format will make it easy for everyone else to do the same.

All the winners that you voted for in our balloting earlier this year are here, divided into the areas of Food and Drink, Arts and Culture, Music and Nightlife, Community Life, Shopping and Services, and Health and Recreation. And we’ve also carried over our tradition of celebrating some of the quirkiest, wildest and most wonderful things about living here in our Editors’ Picks. So without further ado, enjoy the Best of Santa Cruz!

To read the full e-edition of the Best of Santa Cruz County 2020 magazine, visit: bit.ly/BestOf2020Print

Best Excuse to Stand Around a Gas Station Parking Lot

No one among the enthusiasts of Watsonville’s El Volcan has to be convinced that a great restaurant does not necessarily require four walls and a front door. El Volcan is one of the area’s most popular food trucks, which rolls up dependably every day in the late afternoon to park next to the gas pumps at Gomez Automotive at the corner of Main Street and Riverside Drive. The truck serves up fresh Mexican fare until midnight every night (and on Fridays and Saturdays, it’s open until 2am). It’s no surprise that atmosphere ranks near zero (especially after sundown), but the food more than makes up for it—the carne asada taco, just wow—and, yes, the corn tortillas are made fresh right there. WB

A lot of people don’t really know what tahini is—okay, maybe not a lot of people in Santa Cruz, but you know what I mean—and when the subject comes up, I have heard it described more than once as “kind of like peanut butter.” I have no idea what the people who say this are talking about, because I only eat tahini on rice, and here is my message to anyone who would put peanut butter on rice: you nasty! Maybe I have been spared the trauma of PB-like tahini because I only get it from Dharma’s. And when I say “get it,” I mean that I stalk this place for its tahini. I would participate in cult rituals centered around Dharma’s tahini, should such a cult spring up (I’m much too lazy to start one myself). Dharma’s take on this sesame-based sauce is so savory, so rich in flavor and so smooth on the tongue that I often go there just for a bowl of rice with two sides of tahini (warning: just one will not properly saturate your entire bowlful of rice). I would gladly eat it every day; in fact, that is my retirement plan! SP

Were you not already thinking of taking up fishing, becoming a ship captain, or finding a way to live out the rest of your life on the open seas? You probably will be once you step into the Wharf House. This restaurant at the end of the Capitola Wharf is not only properly named, it is decorated to the gills to inspire your wildest seafaring dreams. Order some clam chowder or fish and chips while you contemplate the stories behind the glass fishing floats, lobster traps, and other nautical treasures that surround you. AG

Santa Cruz boasts some stellar sunsets. While there’s probably no bad place from which to enjoy the last rays of the day, what view isn’t enhanced with a splash of tequila? Sip on the perfectly-balanced La Patrona here at a table with a view of the bay. You can watch the last light of the day as it settles over the beach volleyball courts, Walton Lighthouse, and the boats going to and from the harbor. It seems like a tailor-made stage for the sun to take its bow after a long day of keeping things characteristically warm and bright in Santa Cruz.  Don’t be surprised if you feel like applauding. AG

Santa Cruz County is an area replete with nutritionists, osteopaths, naturopaths, cranial sacral massage therapists and the like. There are so many ways to move qi through the body and also so many experts on how to tonify patients’ energy. Acupuncture is a great go-to! I have two acupuncturists—Glenn Kazmierski and Nancy Lowe—and I swear by them both. Importantly, this arrangement gives me an edge whenever the topic of health comes up at a party (except that I don’t go to parties, because I’m too busy focusing on my health). JP

Among the hundreds of graves at Watsonville’s Pioneer Cemetery is the final resting place of Charley Parkhurst, one of the central figures in 19th-century gender history in America. Charley was born female and raised as a girl in New England, but ran away from home at age 12 and ended up in California during the Gold Rush, presenting as a man for the rest of his life, more than 40 years. He became a legendary stage-coach driver in Northern California but it wasn’t until after he died in Watsonville that it was discovered Charley was female. In 1868, he may have also been the first female ever to vote in a U.S. presidential election. Charley is just one of the fascinating stories to discover at the Pioneer Cemetery. WB

No one can accuse Santa Cruz of lacking photogenic spots, but Pleasure Point may really have it all if you want to encapsulate the local spirit for someone who’s never been here. From East Cliff Drive you can capture beachy, colorful homes dwarfed by palm trees, surfers and sea otters riding the waves together, and local shops dishing out the best pizza slices and cool new beach apparel. Visitors and locals alike mingle here on foot, on bikes, and at the beach to take in the sweeping panorama of Monterey Bay. The chill vibe beckons everyone to come hang out, and it all highlights why it can be so hard to be humble about how amazing Santa Cruz is. Your friends and family will be packing their bags in no time for a visit when they see photos of this slice of paradise. AG

There are so many joys related to watching the Santa Cruz Warriors. One is watching the careers of the old development-league stars who left for greener pastures—Seth Curry, Kent Bazemore, Damion Lee, Kendrick Nunn, Juan Toscano-Anderson, Dewayne Dedmon. As a matter of fact, one play in February by the scrawny former Sea Dubs forward Chris Boucher made the rounds online. Boucher, who’s now with the Toronto Raptors, threw down the rock hard for a filthy put-back dunk over perennial MVP favorite Giannis Antetokounmpo and also Pat Connaughton. This prompted the Raptors announcer to scream out Boucher’s name like a pubescent boy belting out a primal battle cry. Appropriate response. JP

Some days when the weather is warm and the conditions are right, you can stand on West Cliff Drive looking toward Moss Landing and see tall cliffs of more than 100 feet lining the beaches of Monterey County. Of course, those cliffs aren’t real, and they probably have something to do with refractions, but they sure look cool. JP

There are beaches, and then there is the beach, and Manresa more than earns the title. Once you’re here, it really doesn’t matter if you turn left or right: the sandy shoreline seems to keep going endlessly in either direction. It also doesn’t matter what you’ve come to the beach for, because Manresa can keep everyone happy. At any given time you can find families and friends hanging out, boogie boarders and surfers enjoying the waves, fishermen casting in the surf, and all kinds of pups on parade with their humans. Having such a beautiful place to listen to the waves, stroll while taking in the natural world and just generally unplug for a while feels more vital than ever, and Manresa is always there to fill that need. AG

The beaches and the mountains get all the attention. But sometimes all you need is a sleepy, meandering country road—to paraphrase John Denver—to take you home. One of the finest in the region is Larkin Valley Road between Seascape and Watsonville. The four-mile-long two-laner cuts through seductively serene and picturesque countryside between and roughly parallel to Highway 1 and Freedom Boulevard. Near the east end of the road is the historic Castro Adobe, one of the oldest and most beautiful buildings in the county. The road’s relative lack of car traffic makes it a decent option for an adventurous afternoon power walk, though its charms can also be enjoyed by car, motorcycle, bicycle, or riding lawnmower (the latter not recommended). WB

Mechanics Mark and Andy are so friendly whenever you bring your Honda or Acura in for an oil change, belt replacement or engine check-up, that you’ll never want to miss an opportunity to stop by.  Customers can catch up on the latest in their lives and talk with Mark about his latest mountain biking escapades. The real mystery is how the two mechanics were able to put the atmosphere of the television bar Cheers into an auto repair shop. And I’ll come out and say it: going to Mid-County Honda Acura is the best part of driving an old Honda around town. These guys have good prices, too. JP

Straddling the Pajaro River and the boundary between Santa Cruz and Monterey counties in Aromas is the Rogge Lane Bridge, a once unspectacular thoroughfare that, thanks to the artists of the local community, has become a colorful and enchanting tribute to the steelhead trout that once populated the river (and are reportedly making a comeback). A small army of locals descended on the bridge in 2019 painting several dozen fish in bold colors, each individually designed and dedicated to an inspiration of the artist’s choice. The fish on the bridge are best experienced, of course, on foot, but even driving across it, the bridge flashes into sight much like a school of darting fish in a Pixar movie. WB