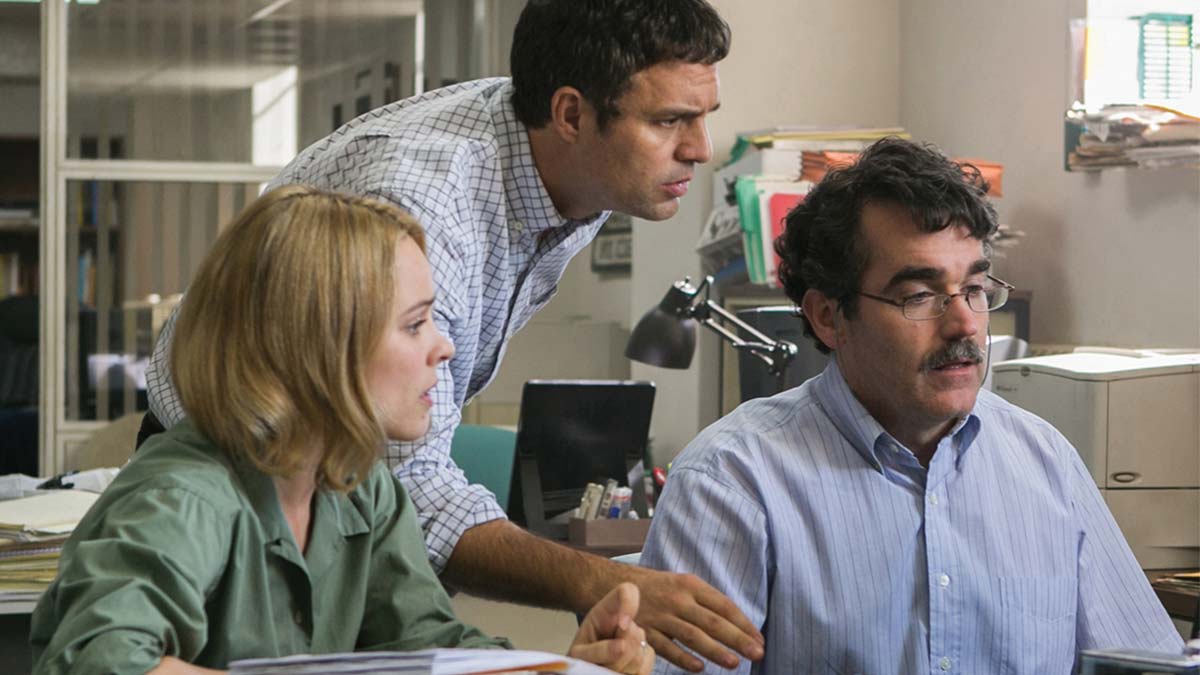 What were they thinking with this year’s Oscar nominations?
You don’t need to be psychic to predict that, come Sunday night, the gold will be bestowed on a movie whose cast, filmmakers and subject matter are mostly—how else can I put this?—white and male. Because that is all there is to choose from.
Over at Boys Town (aka: the Motion Picture Academy), white male ensemble casts were almost the only nomination-worthy movies of 2015. Still, there’s less consensus than usual about front-runners this year, which might lead to some surprises in the otherwise cookie-cutter sameness of the field overall.
BEST PICTURE Spotlight This is really a close call. But out of the eight contenders, we can eliminate the three films whose directors didn’t get nominated (adios Brooklyn, Bridge of Spies, and The Martian), and further weed out Room, which hasn’t garnered any pre-season buzz in this category. Which boils down to three buzz-worthy contestants: The Revenant, The Big Short, and Spotlight, each of which has earned some pre-season love. (As has Mad Max: Fury Road, although I don’t think Academy voters will take it seriously in this category.) On the strength of Leonardo DiCaprio’s almost certain lock on the Best Actor prize, The Revenant looks like the one to beat—except that director Alejandro González Iñárritu already won for best film and director last year for Birdman. But I’m betting that even if he does score a second consecutive Best Director award, Oscar gold will still go to Spotlight, the kind of smart, hard-hitting issue movie that Hollywood likes to applaud itself for making.
BEST DIRECTOR Alejandro González Iñárritu, The Revenant. OK, I wasn’t that crazy about the movie, but it was a pretty amazing directorial achievement. Iñárritu has been cleaning up, pre-season, and my hunch is that his winning streak will prevail over Tom McCarthy (Spotlight), Lenny Abrahamson (Room), George Miller (Mad Max: Fury Road), and Adam McKay (The Big Short).
BEST ACTOR Leonardo DiCaprio, The Revenant. I don’t get it either, how 2.5 hours of grunting through the wilderness counts as acting; DiCaprio has given far better performances, where he actually spoke dialogue, but, hey, it’s his turn. Plus, the Academy won’t be able to resist putting Leo up on the podium with Kate Winslet (just in case she wins Supporting Actress for Steve Jobs—as she deserves to), 20 years after Titanic. I’d vote for Bryan Cranston (Trumbo), or Michael Fassbender (Steve Jobs). Eddie Redmayne (The Danish Girl) and Matt Damon (The Martian) round out the category.
BEST ACTRESS Brie Larson, Room. The no-brainer of the year. She’s already won every other award in this category over Cate Blanchett (Carol), Saoirse Ronan (Brooklyn), Charlotte Rampling (45 Years), and Jennifer Lawrence (Joy).
BEST SUPPORTING ACTOR Sylvester Stallone, Creed. For the same reason as above; plus, this is the award they never gave him for Rocky when he was in his prime. Sorry, Christian Bale (The Big Short), Mark Rylance (Bridge of Spies) and Mark Ruffalo (Spotlight). Possible (but unlikely) upset: Tom Hardy, The Revenant, (although it would be a backhanded nod to Mad Max: Fury Road).
BEST SUPPORTING ACTRESS Alicia Vikander, The Danish Girl. With four high-profile films this year, Vikander deserves to win something. I’d give her the Best Actress prize and give this Oscar to Kate Winslet for her pithy, Polish gal-Friday in Steve Jobs, over Rachel McAdams (Spotlight), Rooney Mara (Carol), and Jennifer Jason Leigh (The Hateful Eight).
SHORT TAKES: Look for Spotlight and The Big Short to win their respective Original and Adapted Screenplay awards. (MIA: Aaron Sorkin, unnominated for his smart, literate script for Steve Jobs.) My guess is Inside Out will trump Anomalisa for Best Animated Film, and the Hungarian drama Son of Saul will crush the Foreign Language competition. Expect the vast snowscapes of The Revenant to earn Cinematography gold, while Mad Max: Fury Road speeds off with the Costume and Production Design awards that I would give to The Danish Girl—if only they had asked me!