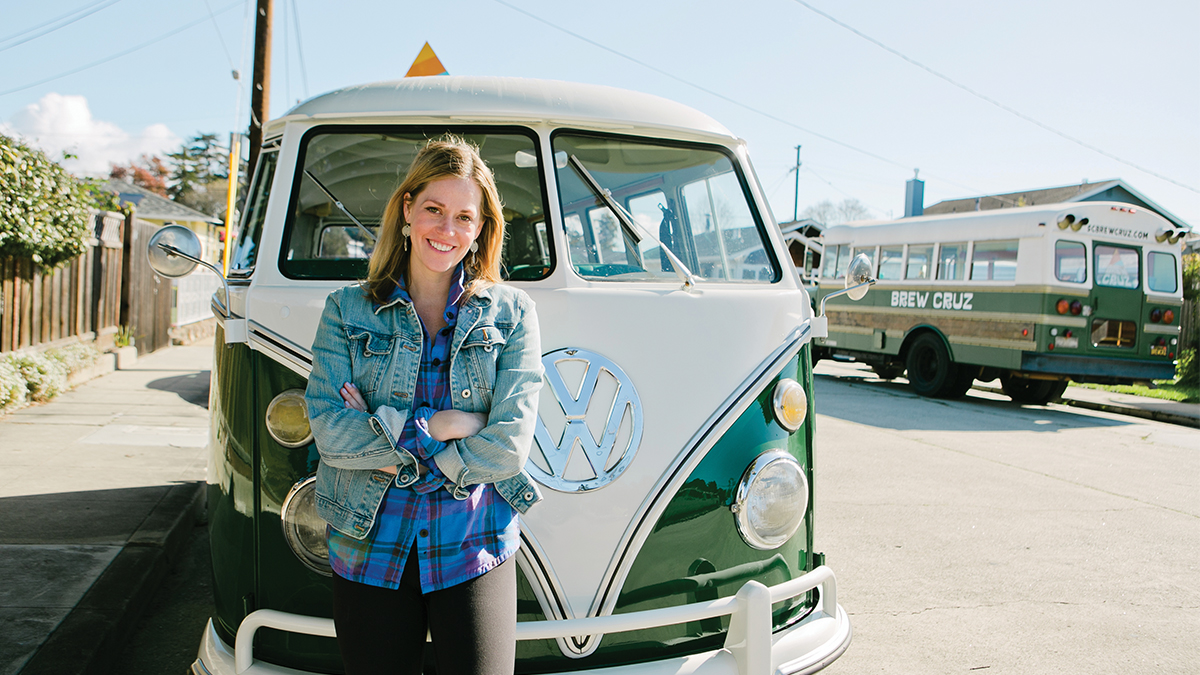 When Annie Wolff-Pautsch launched her Santa Cruz County brewery tour company Brew Cruz in 2014, its early success left her with an unanticipated problem. Wolff-Pautsch had originally thought she would fill her refurbished 15-seat 1989 Thomas International school bus, aka “Betty Jane,” with public tours of small mixed groups, but private tours of large celebratory groups quickly filled her schedule. She found herself frequently having to turn down inquiries from groups of two to six people eager to enjoy her novel tour experience. “My intention was to have public tours on Betty Jane à la the Chardonnay, but the popularity of private groups created a need for another vehicle for public tours,” says Wolff-Pautsch.

With that in mind, Brew Cruz added a second vehicle to its fleet last month: a hunter-green-and-white 1964 VW Bus named “Slowboy” to be used for public tours. Minimal updates to the vintage vehicle include hardwood floors, custom blue vinyl seating and a Bluetooth stereo for guests to play their own music. They’ve preserved the tweed interior lining and original dash, where the clock is set permanently to 5 o’clock. A light-up Brew Cruz pyramid logo sits on top of the wooden rack like a party hat. “The thread between both of the buses is a local perspective of the Santa Cruz beer scene,” says Wolff-Pautsch.

Slowboy embarks from the Dream Inn and accommodates four to seven passengers who can reserve their spot online on a first-come, first-serve basis. For $45, guests are shuttled between Shanty Shack Brewing, Santa Cruz Ale Works, Humble Sea, and Santa Cruz Mountain Brewing, and receive $1 off their first beer at each establishment, parking validation at the Dream Inn and happy hour prices at the Jack O’Neill Lounge after the tour. Trips currently run on Saturdays and Sundays, but Wolff-Pautsch plans on expanding to at least four days a week by summer and during Spring Break.

So far, she says that while the passengers may start out as strangers, it usually doesn’t stay that way for long. “By the end of the tour they’re all sitting together, discussing the beer and breweries, and happily stumble into the O’Neill Lounge together.”