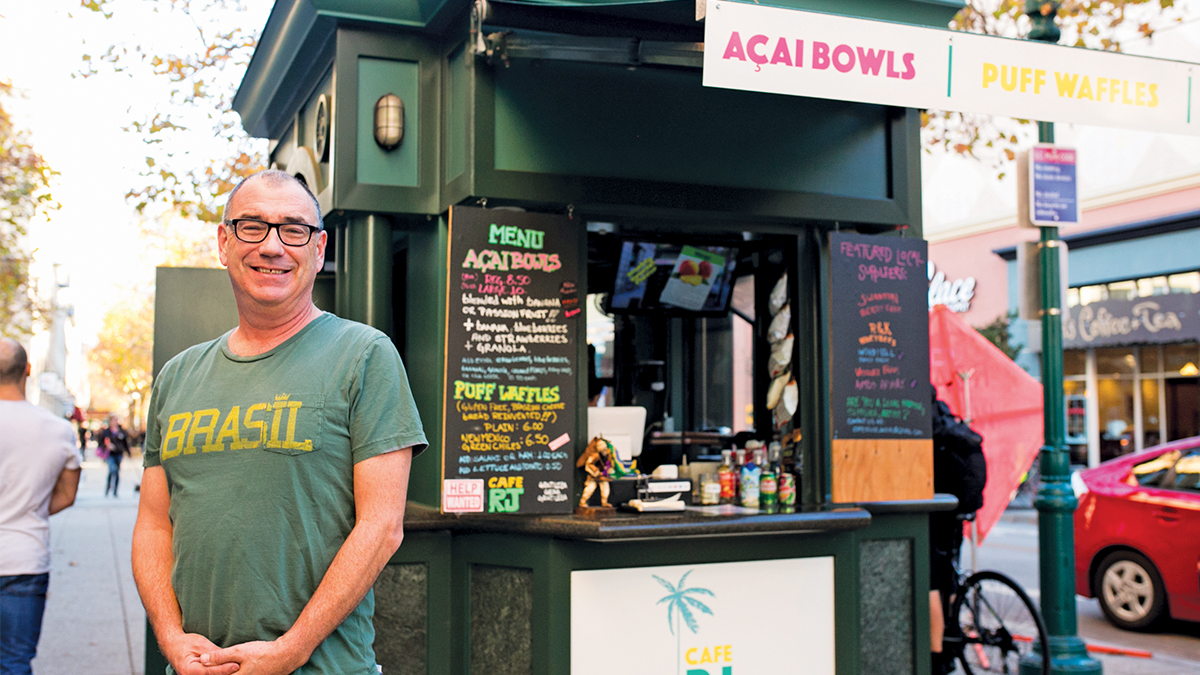 Joe MacFarland grew up in Brazil and got addicted to pão de queijo, among other Brazilian foods. He moved to the states when he was 14 years old, and finally settled in Santa Cruz 14 years ago. On Sept. 1, he brought a little piece of his childhood to Café RJ, which is a downtown Santa Cruz kiosk that serves “Brazilian food reimagined,” as he puts it. He took some time to explain to us what that means, and why you should make it a habit of eating pão de queijo.

What exactly is “Brazilian food reimagined?”

JOE MACFARLAND: What I’m trying to do is take the food that is normally served in Brazil—street food—and then reimagine it for the United States. Pão de queijo, which is this Brazilian cheese roll, mine is made with a waffle maker that I have in the kiosk, and it comes out as these little puff waffles, which are gooey and cheesy and delicious. I’m changing them because I’m blending them with some American products. For example, you can get the puff waffle with New Mexican green chilis. I can also put hemp seeds on it. So, I’m giving it a slightly different flavor than what’s available down in Brazil. Also, the way that it’s presented in a waffle maker is different than how it’s done in Brazil. In Brazil, they’re served as these cheese rolls. They’re probably as ubiquitous as French fries are in the United States. But the thing about it is they need to be warm to get the full flavor, because they’re made with sourdough tapioca flour. I use imported sourdough tapioca flour to make them. Then I blend it with some Mexican cheeses and some American cheeses. I can’t get the Brazilian cheeses that they’re traditionally made with in the United States. So, what I’ve come up with is a blend that mimics the flavor and the gooiness of the Brazilian cheese. This recipe is something I’ve been working on for 20 years to get it just right.

What about the acaí bowls?

They’re made in the traditional Brazilian manner. There’s no apple juice inside it to balance the flavor of the acaí. I blend the acai with Brazilian fruits: passion fruits, guava, a whole bunch of different tropical flavors. Like any other acaí bowl, they’re covered with regular granola or gluten-free granola. And the berries are in season. Right now, it’s strawberries and I put bananas and blueberries on it.

What’s the Guarana drink you sell?

It’s a traditional soft drink from Brazil. I guess it was Brazil’s response to Coca-Cola. Guarana is an energy fruit from the amazon. It’s blended in Brazil to create this soft drink. It’s carbonated and it’s got a sugary flavor. It’s kind of hard to describe, because there is no equivalent flavor to the guarana berry in the United States. Trying to think of something it might be close to, but there’s really no equivalent. It’s something very unique to Brazil.