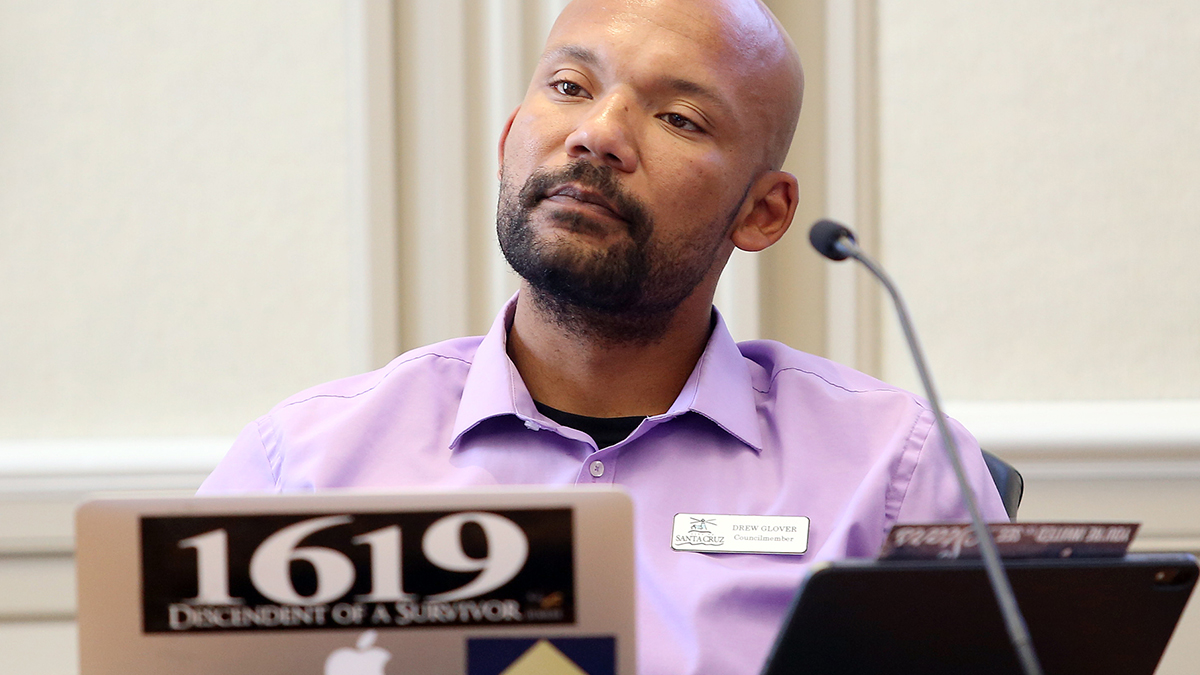 Tension was high on the night of Wednesday, Sept. 25, at Santa Cruz City Hall.

It was one night after the City Council voted to table a formal reprimand against councilmembers Drew Glover and Chris Krohn.

Kevin Grossman, chair of the Commission for the Prevention of Violence against Women (CPVAW), said he was “absolutely livid” about the previous night’s meeting.

Grossman, the only man on the seven-member commission, added that he was “completely and utterly floored” by what he perceived to be victim blaming and shaming at the council meeting. Several of his colleagues expressed similar sentiments.

On Tuesday, Sept. 24, the City Council considered the possibility of issuing a censure to councilmembers Glover and Krohn, who were investigated for misconduct allegations. Each councilman had one substantiated claim against him, per the findings of independent investigator Joe Rose, as well as several unsubstantiated ones. None of the claims were deemed to be unfounded, or false. Although all the complainants were made by women, the complaints did not establish proof of gender discrimination, the Rose Report said. The mayor’s informal bullying complaint, which helped kick-start the process, was not substantiated. Later that night, the council was also scheduled to hear recommendations laid out in the report.

Moments before Mayor Martine Watkins opened the floor for public comment, Councilmember Sandy Brown made a motion to table the censure, with support from Vice Mayor Justin Cummings. Both voted in favor of tabling the matter, as did Krohn and Glover, earning a standing ovation from their supporters in the audience. That opened discussion on the next item, the Rose Report’s recommendations.

Many of the comments from the public, though, focused more on the item that had been tabled. During the council meeting’s public comment, City Analyst Susie O’Hara went public as one of the complainants in the report. One of three city employees to speak up, O’Hara was surrounded by her husband, who also spoke, and the couple’s three kids. Her allegations, which weren’t confirmed in the Rose Report, went back to Glover’s time on the CPVAW, a body that O’Hara helps oversee.

At the council meeting, CPVAW commissioners also gave a presentation in support of the complainants who’d come forward. Many women who spoke felt disappointed by the censure’s tabling.

Cummings and Brown both insisted they meant no disrespect, but rather that they wanted to prioritize moving forward with positive solutions.

Grossman tells GT he was upset that supporters of Glover and Krohn falsely claimed that none of the complaints were substantiated, and that all of the unsubstantiated claims were fabricated. One commenter called on the women to “man up,” while another said it was time for them to, “put your lady shoes on and toughen up.”

Glover nodded along as many of his supporters talked. Some commenters brushed off the complaints against Glover as proof of racism or evidence that the women who came forward don’t know how to deal with conflict. Glover, who is black, says he believes that “implicit bias” against people of color is a significant issue within city government. He says that he’s been calling for conflict resolution training for months, and that Rose was the third outside expert this year to do so.

But the following evening, the CPVAW voted to send a message to the City Council. The commission’s vote supported O’Hara, arguing that Glover had shown a pattern of being disrespectful and abusive to her, going back to his time on the commission—something Glover denies, noting that Rose did not establish those findings.

The Rose Report did explore tension during Glover’s time on the commission, including Glover’s habit of telling his fellow commissioners that if they didn’t go along with his policy proposals, they apparently must not “care about preventing violence against women.”

The CPVAW’s motion on Wednesday night stressed the importance of believing victims and implored the City Council to bring the censure item back for a full hearing and a vote.

Councilmember Donna Meyers, who brought forward the original censure item, says she supports bringing back the item again. She isn’t sure she would have done so otherwise after last week’s meeting, which she viewed as dispiriting.

After tabling the censure at last week’s meeting, the City Council voted on several conduct-related recommendations outlined by the investigative report and the Human Resources Department.

The council voted to appoint a new committee that will create a conduct policy for appointed and elected officials, and require councilmembers to attend a live training on sexual harassment and workplace conduct within the first 60 days of getting into office. The council will review the city’s policies on workplace conduct, harassment and retaliation and move forward with an $11,000 bid from the Conflict Resolution Center for training and mediation. On Glover’s recommendation, that could include options for “race, class, gender and power issues training, with an emphasis on implicit bias.” Glover also wants the city to approach the Santa Cruz Community Coalition to Overcome Racism about its services.

Brown and Glover additionally called for “accountability” to ensure that employees are using conflict resolution services before filing complaints.

Watkins, for her part, requested that City Attorney Tony Condotti research whether it would be possible for the council to place all potential liability for violations under the city’s conduct policy with individual councilmembers, instead of leaving the city as a whole on the hook in the event of any hypothetical lawsuit.

LET IT ALL OUT

Glover and Krohn supporters did take issue with other aspects of the council meeting.

Mayor Watkins had intended not to recognize Councilmember Brown when she attempted to force a vote to table the censure moments before public comment was about to begin. Brown and Watkins appealed to Condotti, who shared that Brown was free to make her motion.

That prompted Councilmember Meyers to respond that she felt smeared by Facebook posts and comments from Glover implying that she was racist. Meyers slammed her hand down on the counter and yelled, “I’ve been an out lesbian for 34 years!” She started to walk away before sitting down again.

Glover responded to Meyers by saying that if he had acted that way in a council meeting, “the world would have ended.”

Meyers says she believes in conflict resolution. She has, however, taken some of Glover’s comments about institutional racism and bias, in the aftermath of her complaint, as jabs at her character. “I don’t go around calling people homophobic,” she says.

Glover hopes the new services that the city is seeking will help councilmembers reinterpret casual remarks that may have been taken the wrong way. He sees Meyers’ outburst as a sign that the council has work to do in terms of understanding race relations.

“Now, does that mean Donna Meyers is racist?” Glover asks. “I can’t say that. I don’t know Donna Meyers. But the reaction should be very concerning to a lot of people.”