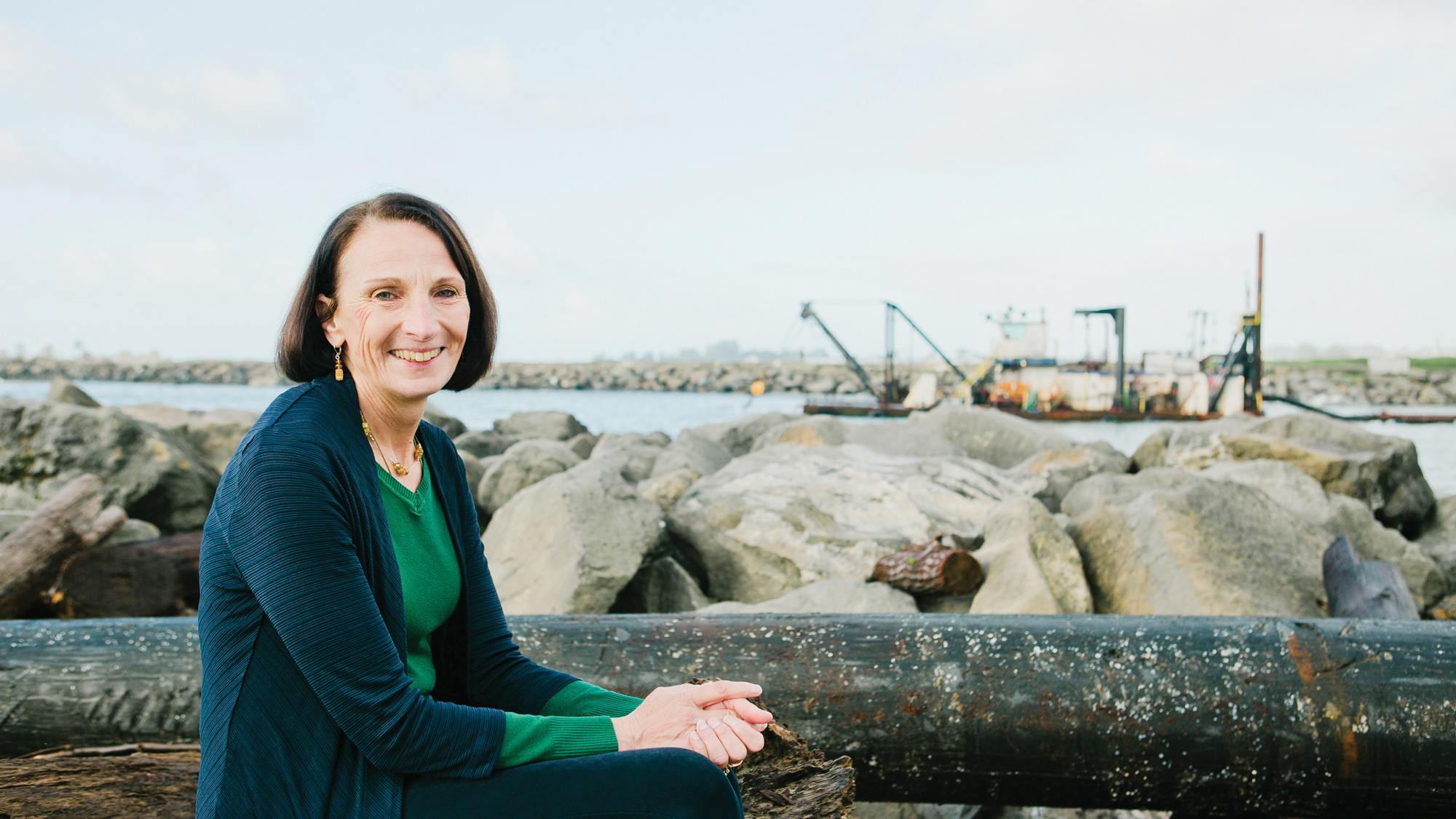 The surf is pounding Twin Lakes State Beach just yards from Katherine O’Dea, executive director of Save Our Shores, who is sitting on a log by a rocky jetty.
The beach is, at most, a five-minute walk from the Save Our Shores office at the Santa Cruz Harbor, and this sandy destination is hardly a sliver of the 1,100 miles of California shoreline that is protected and open to everyone, thanks to a California ballot measure passed in 1972. After a recent shakeup at the California Coastal Commission, which is charged with protecting the coast, O’Dea worries that the future of California’s shores may soon be in limbo.
“Everyone does at least have the potential for access, even though everyone doesn’t access it,” says O’Dea, who has lived on the East Coast from Maryland to New Hampshire. “Even around here, there’s a lot of people who never get to the beach. We have that potential. On the East Coast, a lot of it is bought up. Private land—you can’t access the coast for miles, hundreds of miles. So, to have this is an incredible treasure. If we don’t protect it, we’re just insane. It’s insane.”
The disruption that has O’Dea flummoxed is the firing of Coastal Commission executive director Charles Lester on a 7-5 commission vote. It isn’t clear what exactly is behind the decision to lay off Lester. Commissioners spoke in vague terms about what he could have done better, and the group conducted part of its latest meeting, held in Morro Bay, in closed session.
With so little explanation and so much secrecy, it’s hard not to think that there may be something nefarious afoot. Environmentalists, like State Assemblymember Mark Stone (D-Scotts Valley), are worried that pro-development money and professional lobbyists are behind the change.
“There’s long been a tension between the lobbyists who go there [and the commission],” says Stone, a former coastal commissioner himself. “And there have been some very strong relationships with certain commissioners—take them out to lunch, take them out to dinner.”
It’s difficult to track lobbying’s influence on the body, because Coastal Commission lobbyists don’t have to identify themselves—although Stone, along with two other lawmakers, introduced a bill two days after Lester’s firing that would force them to register as lobbyists.
For Lester’s Feb. 10 hearing, Stone and O’Dea both drove to Morro Bay—along with over 600 Californians eager to defend Lester. Beginning immediately after the meeting, O’Dea says she went through several stages of grief, starting with disbelief. Lester, who lives in Santa Cruz, could not be reached for comment for this story.
Locally, the commission and its staff have not been immune from criticism in recent years, taking flack for what some called a series of overreaches. Cyclists were up in arms when the commission sent the Arana Gulch Multi-Use Trail back to the drawing board in 2010. The following year, politicians like Lynn Robinson and Ryan Coonerty criticized the commission when it rejected plans for the La Bahia Hotel.
Stone thinks each of those proposals came back as better projects before ultimately getting approved by the commission—as 80 percent of projects eventually do. He says much of the power of the commission is in negotiating, and he worries that the art of working with developers will be lost under the commission’s next director.
Fred Keeley, a former Santa Cruz County treasurer and lawmaker, agrees that the group’s negotiating power could be at stake. He fears that the ultimate result of Lester’s firing will be new developments benefiting no one but the rich, and leaving large portions of the coast blocked off to the rest of Californians.
The Coastal Commission has 12 members, with eight appointed by the state legislature. Four more are appointed by Gov. Jerry Brown, who chose not to intervene in this matter, calling it “a personnel issue” in the days leading up to the vote. That didn’t sit well with Keeley and other environmentalists.
Keeley notes that Brown, whose four appointees all voted to fire Lester, is the only person who has the power to change his appointments any time he wants.
“Because the governor’s appointees serve at the pleasure of the governor, the governor must agree with what his appointees did,” Keeley explains. “He’s the only appointing authority who could do something about it if he did disagree. And to me, this is an incredibly important decision. This is not a land-use decision. This is the heart and soul of the Coastal Commission.”
Stone says that the governor “should be embarrassed” of what transpired.
Ocean lovers are anxious to see how the Coastal Commission weighs in on Martins Beach in San Mateo County, where Bay Area billionaire Vinod Khosla bought land two years ago. Khosla has closed a road to the beach, cutting off coastal access.
The firing of one person, of course, doesn’t mean that Santa Cruz’s beaches may become overrun with high-rise housing complexes anytime soon. Former Coastal Commissioner Gary Patton says that Measure J, which voters approved in 1978, should provide a framework for protecting natural areas, including beaches.
Former Santa Cruz mayor Mike Rotkin says most politicians in the county are very environmentally sensitive and that noticeable changes would be more likely in Southern California or Eureka County.
O’Dea, who has been at Save Our Shores for four months, says that the commissioners probably did not anticipate how Lester’s firing would put them under a microscope.
“No one in the environmental community is sitting back and saying, ‘Oh well, we tried,’” she says. “Everyone is still fired up. Everyone is still angry. So, it’s not going to get swept under the rug. If that was their intent to rule without much oversight, it’s not going to happen.”

Next ArticleFrom The Editor