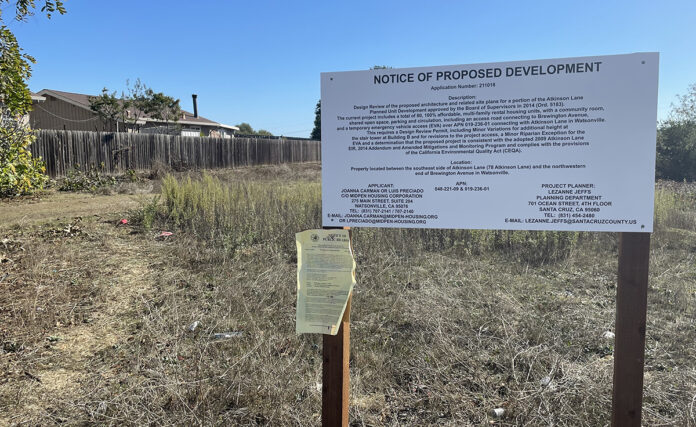 WATSONVILLE—The Santa Cruz County Board of Supervisors on Tuesday unanimously approved the construction of an 80-unit affordable housing complex between Atkinson Lane and Brewington Avenue that could break ground early next year.

The project, a part of a multiphase development plan approved some two decades ago, is spearhead by nonprofit developer MidPen Housing. It will consist of three 3-story buildings, an open gathering space and some 137 parking spaces. It will be built over a vacant grassy ravine on unincorporated land near Watsonville’s city limits.

It is the second phase of the Pippin Orchards development that was completed off Atkinson Lane in 2019, and like that project, every unit will be deed-restricted under the county’s affordable housing policies. Of the 80 units, 39 of them will be deed-restricted to farmworker families, 37 would be filled through vouchers from the county’s Housing Authority and all of them would be listed between 30-60% of the area’s median income.

That came as a relief for 4th District Supervisor Greg Caput, who represents the area. Although he voted to approve the project, Caput was reluctant to support the rest of the development plan OK’d by several agencies more than a decade ago. That initiative, called the Atkinson Lane Planned Unit Development, has a subsequent phase that would add another 90 units of affordable housing to the east of the development approved Tuesday.

That phase, however, won’t come before the board for several years, as that property won’t be converted into housing until agriculture operations on those farms are deemed no longer feasible.

“Phase three is something down the line that will come years from now, for probably the next generation, so I don’t have to worry about it,” Caput said before he asked staff multiple times to remove language in the staff report that mentioned phase 3. “We haven’t had neighborhood meetings on phase 3. I don’t want my name used in the future where someone can say, ‘Yeah, Supervisor Caput said it was OK.’”

Although the rest of the board was largely supportive of the project, one elected leader spoke in opposition of it: Watsonville Mayor Jimmy Dutra. The representative for Watsonville’s 6th District, which oversees that area of the county’s southernmost city, said during public comment that he had concerns about the increased traffic flowing through Brewington Avenue and the quiet, upscale neighborhoods of single-family homes off that street. He also said that the project would likely not benefit Watsonville residents.

“If this housing was only going to serve South County residents then that would be fine, but that’s not how it happens,” he said. “There are lists that everyone from the county gets on and people will move into these properties from all around.”

Only one other person spoke in opposition to the development during public comment.

Another 11 callers all voiced support for the project, including several nonprofit leaders and farmworker housing advocates who say the state of housing for the region’s farmworkers is forcing many to flee the area or live in unsafe conditions.

When the first phase of the Pippin Orchards development was completed in 2019, some 2,500 people applied for the 46 units available “illustrating the extraordinary need,” said Land Trust of Santa Cruz County Executive Director Sarah Newkirk.

“[This project] won’t solve our farmworker housing but it will have a meaningful impact,” she said.

Supervisor Zach Friend said the project is an example of why the county—and the greater state of California—is in the thick of a housing crisis.

“This has been a 20-year process, there’s been litigation, it’s been through LAFCO, it’s been through city and county discussions, Measure U, I think it’s hard to imagine a project … that’s going through a longer process just to make its way toward completion,” said Friend, whose 2nd District oversees some areas of Watsonville.

The project received a unanimous recommendation for approval from the county’s planning commission in late October, and the city of Watsonville approved an agreement with the county that laid out who—the county or city—would be responsible for the services provided to the development and who would collect certain fees.

The city, according to the agreement, would collect more than $1 million in impact fees in exchange for providing its services such as police, fire, water and solid waste. The agreement also states that the city would annex the property when completed.

The project would be the third affordable housing development greenlit in the Atkinson Lane area, including the aforementioned first phase of Pippin Orchards and the 53-unit complex on the corner of Atkinson Lane and Freedom Boulevard recently approved by the City Council.

Next ArticleArtist’s ‘Gift to the Community’ Resumes After Dispute