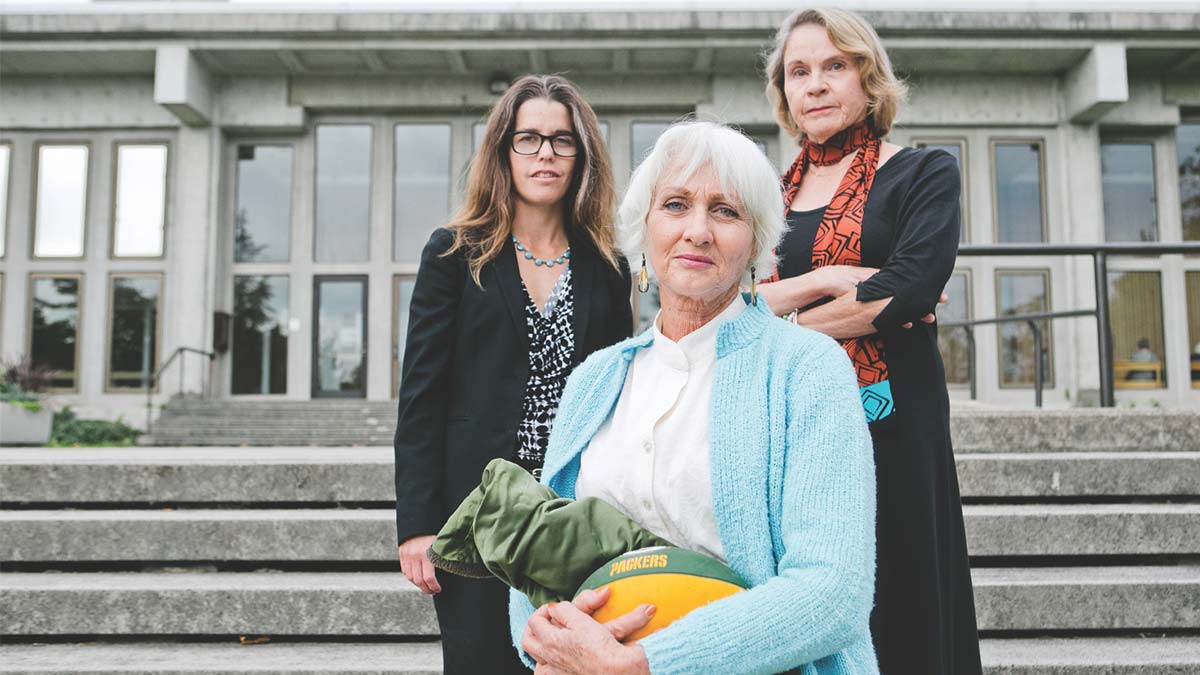 Amanda Sloan took down a poster from her cell late at night, revealing a pipe in the wall. She then took out a piece of gauze, wrapped it around the pipe, hanged herself and died at the Santa Cruz Main Jail.

Sloan was on suicide watch on that night three years ago, and the sheriff’s deputies at the jail were supposed to be checking on her every 15 minutes—but they weren’t. The tragedy of 30-year-old Sloan’s death prompted a lawsuit from her family, and last month, the county settled the suit for $1 million, making it the third-biggest settlement ever for a jail suicide in California.

“It was a problem of not having adequate policies, and then violating the policies they did have,” one of the lawyers, Eric Nelson, says.

Sloan’s death is one of six that have happened since August 2012, and the county’s grand jury has released scathing reports on the jail and its medical provider, California Forensic Medical Group (CFMG), in each of the past three years. Still, the Santa Cruz County Board of Supervisors last month extended its contract with CFMG, which has been the defendant in lawsuits around the state, including in Santa Cruz.

In the two years leading up to her suicide, Sloan suffered one hardship after another, having abruptly lost her dad to a brain aneurysm in 2011. Then her husband, Jeff Smith, got into an argument with his neighbors over an apparent theft a year later. Shots were fired, and Smith died in Sloan’s arms, according to Amanda Sloan’s mother, Fox Sloan.

“Amanda was furious the sheriff’s deputies questioned him rather than let the medical personnel on scene tend to him,” Fox says. “She believes they let him die.”

Fox says Sloan saw the shooter, but no arrests were ever made, and the murder remained unsolved, deepening Sloan’s ire toward local law enforcement. A few months later, Capitola police pulled Sloan over. During the stop Amanda Sloan became angry and sped off, reportedly discharging a gun out of the sunroof. Police said she fired at a police officer, a charge that carries serious jail time.

After being booked, Sloan escaped from jail and headed out on the run, changing her hair color and moving her children from location to location in the Soquel Hills, where her family has lived for four generations. She quickly landed at the top of Santa Cruz’s Most Wanted list.

Eventually, her mother grew concerned that Sloan would do something rash, and when Fox found her daughter at the family’s ranch property in the hills, she called 911, telling dispatchers her daughter was bent on suicide by cop and imploring them not to harm her.

Officers surrounded the property, and when Sloan jumped out the window brandishing a gun, deputies shot her five times, most of the shots hitting her in the legs.

After arresting her, deputies took her to a local hospital and then to the Santa Cruz County Jail, where she repeatedly talked of suicide. When Sloan learned her children had been seized by social services, her depression deepened.

On July 17, 2013, nearly a year after her husband’s death, Sloan was found dead in her cell. According to federal statistics, suicide has been the leading cause of custody deaths nationwide every year from 2000 to 2013—the most recent year with data available.

The four lawyers who filed the suit claimed not only negligence, but also deliberate indifference, which occurs when officers know about excessive risk to an inmate’s health or safety, but disregard it.

“What makes this case different than most cases, aside from the obviously tragic result, is the complete lack of adequate policies—and then the attempt to cover it up by falsifying the observation logs,” said attorney Jonathan Gettleman, one of a team of lawyers that sued the county on behalf of Amanda Sloan’s three children.

The legal team included Gettleman and his partners Eric Nelson and Elizabeth Caballero, along with Diane Vaillancourt, a civil rights lawyer who lives in Santa Cruz.

Not only did the case never reach trial, but it also failed to even reach the motion-to-dismiss phase at the federal court—fairly atypical in cases against local governments. “But the facts were so egregious in this case,” Vaillancourt explains.

Sloan’s death was the last of five jail deaths over an 11-month period between 2012 and 2013 in Santa Cruz.

The following fall, the initial grand jury investigation into the jail found that staff violated two safety protocols before Sloan’s suicide. The first of those mandated officers to perform routine hourly safety checks, and another forbid inmates from placing anything on cell walls, doors or windows.

The staff tasked with safety checks made several entries in the jail’s observation logs, claiming to have visited Sloan’s cell five times during the morning of her suicide from 2:21 a.m. to 3:26 a.m., about an hour before Sloan was found dead.

When the Grand Jury reviewed the video, however, the footage revealed jail staff made only one observation to Sloan’s cell over that time. Staff members had falsified the visitation logs.

On top of that, the door’s window into the cell was obscured by a poster Sloan had placed there, in addition to the one on the wall.

Vaillancourt praised the county for quickly settling, saying this way most of the money will go to the children, rather than paying attorney’s fees, expert witnesses, court costs and other expenses associated with these lawsuits.

“Although no amount of money can make up for her death, we hope this settlement will provide what she wanted most [for her children]: opportunities for a better life,” she says.

Gettleman says the case highlights ongoing problems with conditions at the county jail, which last year had its sixth death in four years, since CFMG became the jail’s medical provider in 2012. The grand jury has investigated the local jail three times in that span.

The U.S. Bureau of Justice Statistics estimates that between 2000 and 2013, inmate deaths ranged from 121 to 151 per 100,000 inmates per year. By that metric, the jail, which has a population of around 500, could expect around three deaths per four years.  That’s twice the county’s rate, although all but one of those deaths happened in the first 11 months of that stretch.

According to the most recent grand jury report, 82 percent of local American jails experienced zero deaths over that 13-year period.

In its latest report, the grand jury studied the death of Krista DeLuca, who died a year ago of drug withdrawal, even though she was being supervised by medical staff. The report lays responsibility for 23-year-old DeLuca’s death directly at the feet of CFMG. The grand jury also strongly suggested the death rate can directly be tied to the jail’s Monterey-based medical provider.

Despite the grand jury’s criticism, the Santa Cruz County Board of Supervisors unanimously approved an approximately $3.3 million contract with CFMG on Sept. 13 for the next five years, with an option for renewal every year. County officials say they want to make sure that CFMG gets certified from the Institute for Medical Quality before renewing again. The institute will lend added oversight to CFMG’s operations at the jail, says Board Chair Bruce McPherson. “It’s a very serious situation and I feel comfortable that we made the right choice,” he says, adding that the jail’s new policy is that anyone at the jail can request an inmate be transferred to the hospital.

The contract was on the consent agenda, a spot reserved for non-controversial votes, until a member of the public asked it to be pulled and discussed. Sheriff Jim Hart told the board he believes “CFMG is the best company available to provide services to the people in our jail facility.”

Hart says the county initiated a request for proposals for medical service companies at the jail and fielded only two responses—one from CFMG and the other from a company called Corizon, which has had problems of its own. (Alameda County, for instance, just discontinued its contract with Corizon and opted instead for CFMG after Corizon appeared to mishandle an inmate’s case of severe asthma, resulting in his death.)

Hart also notes that the county made robust changes to its inmate safety protocol, including a care program for incarcerated seniors, a suicide prevention team, a physical plan for the jail aimed at reducing potential hazards, and the meeting of jail authorities seven days a week to identify and manage high-risk patients.

According to a search of court records on the federal and state court level in California, CFMG is a defendant in 83 different cases. The claims range from simple breaches of contract to major civil rights suits, asserting that inmates who died were denied appropriate medical care.

One of the cases was filed by Krista DeLuca’s child in federal court this past June.

Another case was filed in federal court in May by Lisa Allison, claiming Santa Cruz County Sheriff’s Office deputies stripped her naked and left her lying on a floor of the jail, where she suffered a severe medical episode including profuse vomiting that caused her to be hospitalized. After returning from the hospital, she alleges, her medical care was so inadequate that she suffered a stroke from which she’s never recovered.

Hart notes that CFMG is the medical service provider for county jails in 27 counties in California. There are lawsuits against CFMG in almost all of these jurisdictions.

Chief Jail Deputy Jeff Marsh, however, says these trends are at least partially attributable to how vulnerable the inmate population can be, particularly in Santa Cruz, where drug abuse is common.

“We have to do better,” he adds. “We don’t like it when anyone dies in our jail.”

Gettleman says part of the problem is that governments jail people suffering from mental health crises and drug addiction instead of finding other solutions or sending them elsewhere.

“Incarceration becomes the triage for mental health crisis,” he says.

The grand jury has noted that it can’t investigate CFMG because it’s a for-profit company, but the report lists 12 recommendations to improve oversight over CFMG, as well as detoxification procedures. And although it doesn’t make the recommendation, the report also notes that the county does have the authority to switch back to using the county’s Health Services Agency (HSA) in-house at the local jail, as it did four years ago. The notion of phasing out private medical care in jails is something Gettleman wants county leaders to consider, but Hart told the supervisors last month that the Santa Cruz HSA had trouble with maintaining staffing levels necessary to provide adequate care when it ran the jail.

McPherson believes the county jail wasn’t behind the times, but rather that it is struggling with “changing times.”

“Our jail system in this county and everywhere else is discovering how to not only be a law enforcement, but also a medical treatment type of environment as well,” says McPherson, who encourages people to take tours of the jail to understand how it’s run. “We’re trying to update ourselves as well.”