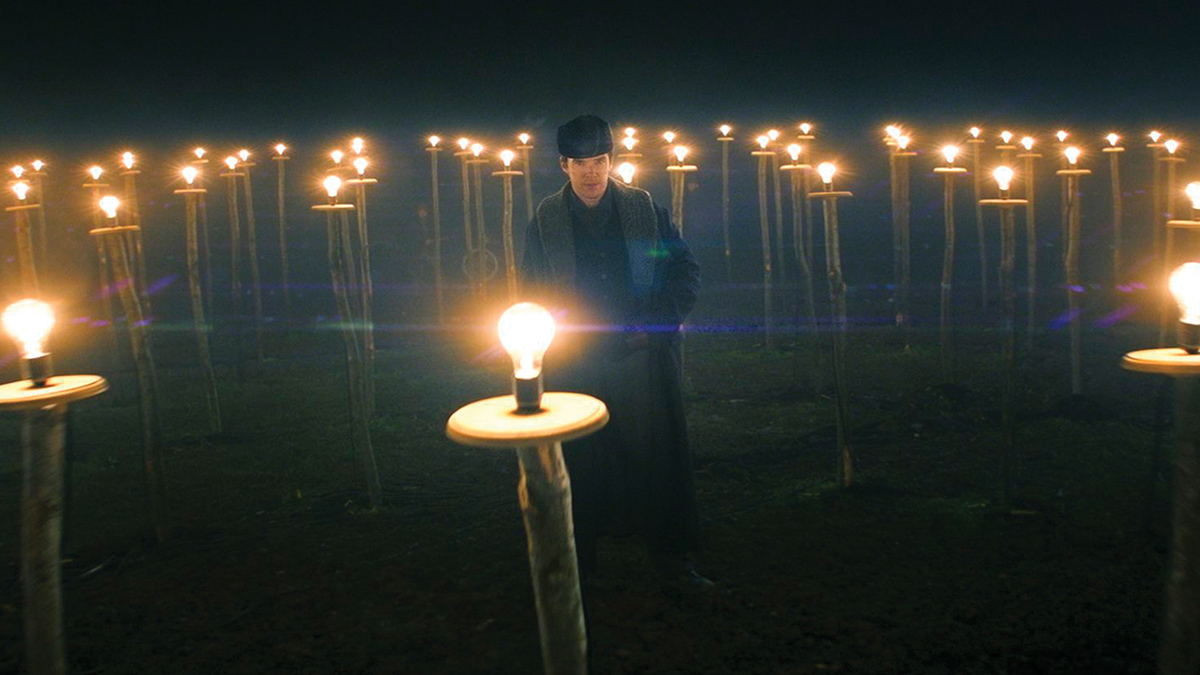 No, it’s not about the latest international outrage launched by our so-called president. But The Current War concerns a subject every bit as cutthroat and high-stakes as any of the recent shenanigans out of D.C.: the clash of titans Thomas Edison and George Westinghouse as they race against time and each other to bring the magic of electrical power to America.

The movie is powered by a few titans of its own. Benedict Cumberbatch stars as Edison (another brusque, eccentric genius in the Sherlock/Alan Turing mode). Michael Shannon plays Westinghouse, peeking out over a formidable handlebar moustache (the era is around the turn of the last century). Nicholas Hoult pops up as Nikola Tesla, the unsung hero of the conflict, and Matthew MacFadyen (the smoldering Mr. Darcy in Pride And Prejudice, once upon a time) plays J. P. Morgan, the fickle financier for whose funding the others compete.

The subject may be electricity, but director Alfonso Gomez-Rejon doesn’t go in for a lot of flash and dazzle. His focus is on the hard work and endless trial-and-error that goes into producing a miracle like the electric light bulb—as well as its unexpected uses and sometimes grim consequences—and the dueling egos and private agendas of the miracle-workers who make it happen. Gomez-Rejon and scriptwriter Michael Mitnick rely on effective storytelling, interesting characterizations and period opulence to give the movie its charge.

Edison, a brilliant tinkerer, has invented the light bulb, and is feverishly working to build a power grid that will deliver electricity to private homes and entire cities. Industrialist Westinghouse is not an inventor himself, but he has a nose for profit and employs a research team to do what Edison is trying to do—but faster. (Also cheaper: a bottom-line mentality that echoes into our own era of lawsuits and random shut-offs.)

Edison lights up his first model town using Direct Current (DC), which requires the cables to be laid underground. There’s a wonderful shot of laborers at work on two levels of these underground tunnels, in cross-section; it looks like an ant farm, with tiny little humans scurrying around, one of many stirring and atmospheric compositions from cinematographer Chung-Hoo Chung. But Westinghouse is putting his money on the Alternating Current (AC), which is cheaper to produce—but far more dangerous, should any unlucky life form make contact with its volatile cables, which have to be strung up on poles above ground.

Already famed as an inventor, Edison doesn’t care about celebrity or money; he just wants to see his ideas come to life, and will organize press junkets and oblige autograph-seekers to do it. Westinghouse covets such fame and desperately wants to build his legacy. Serbian immigrant Tesla is more of a visionary than either of them. He works for Edison’s team for a while, where his engineering skills are not appreciated, but when he designs a motor that runs on AC, Westinghouse brings him on.

Their rivalry plays out in the press, especially when both men submit bids to light up the Chicago World’s Fair of 1893. Dueling lawsuits and court appearances ensue. An animal is sacrificed to demonstrate how lethal electrocution can be—leading to the development of the “humane” electric chair, soon to be given a test drive on a convicted murderer. Such ghoulish fallout irks Edison, who has staunchly refused to allow his designs to be weaponized against other humans.

Katherine Waterston and especially Tuppence Middleton have small but key roles as Westinghouse and Edison’s wives. Tom Holland co-stars as Samuel Insull, Edison’s right-hand man and moral conscience. (He voices one of the movie’s main themes, challenging Edison as to whether he’d rather be remembered as P. T. Barnum or Isaac Newton.) And Chung’s often stunning cinematography (including a breathtaking aerial shot of the World’s Fair) and canny use of split-screen techniques remind us what the movie only hints at in its later scenes—that Edison’s most enduring legacy may be the development of motion picture technology.

Next ArticleLove Your Local Band: Louie The 1st