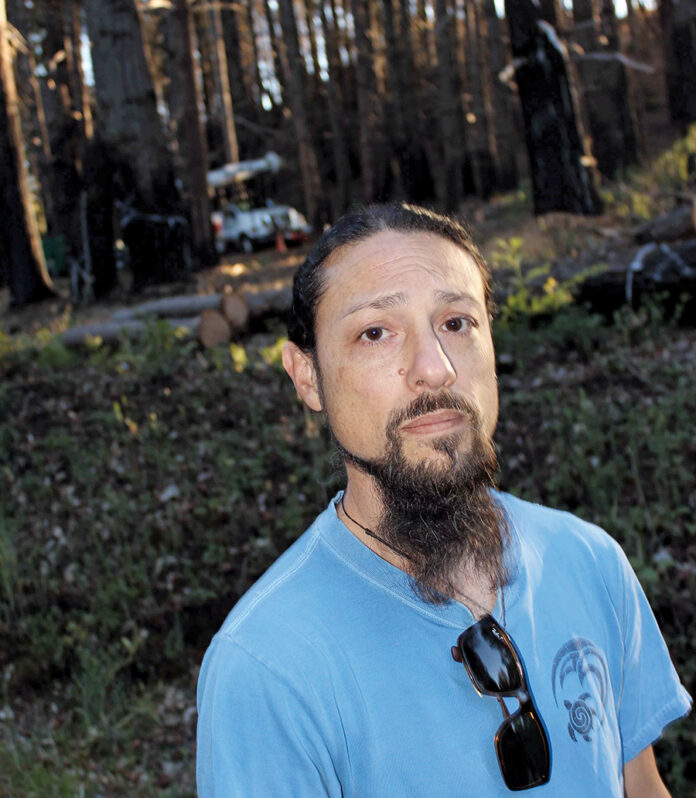 Anthony Hong is quite the tree-lover, although he isn’t exactly a card-carrying environmental activist. But when he could feel the thud of trunks slamming into the ground from his home in Bonny Doon, as part of a PG&E tree-removal project, he started looking for ways to protest.

“All the trees communicate together,” he said on Nov. 11, looking over a day’s worth of chainsaw work and wood chipping by subcontractor Davey Tree at 2375 Pine Flat Rd. “The real solution is to bury the lines, not cut the trees.”

PG&E says it’s identified 23 trees—22 Douglas firs and one madrone—near transmission lines along the property, that need to be cut down for safety reasons.

While arborists surveyed the property earlier this year, the removal work didn’t begin until about two weeks ago. It’s scheduled to continue until the end of the year.

Hong, 42, admits he got worked up and went on the property to speak with the tree-removal crew. He confronted one of the homeowners when she came out to see what the fuss was about.

Hong “joked” he might have to up the ante by interfering with Davey’s work.

Hong’s frustration with falling activity in his neighborhood comes as PG&E is under increased scrutiny by California’s public utility regulator for dozens of planned and unplanned blackouts in the area, many related to tree limbs falling on power lines.

The company may also be at fault for causing the Dixie Fire earlier this year.

Homeowner Mark Mitchell, 48, didn’t want to comment on the interaction between his wife and Hong, but he said he understands his sentiment.

The couple was forced to evacuate for 13 months after the CZU Lightning Complex fires, which partially damaged their home.

Over the last decade, just a couple trees have been removed by PG&E, despite how close many are to the power lines, he said.

But while many of the trunks marked with an “X” on his property appear to be part of healthy trees, he emphasizes he’s not an expert, and they did give the removal work the OK.

“We would love to see PG&E underground the lines,” he said. “That would be safer and provide us with more reliable power.”

However, PG&E confirmed it has no plans to underground the wires at the address.

Forest Revere, 33, a renter in the neighborhood, says he’s generally supportive of the work underway.

“They need to do their job on protecting the lines,” he said. “I think it’s preventative.”

“It’s clear that PG&E’s primary goal is protecting their millionaire shareholders’ profits from liability, not keeping our communities, or our forests, safe,” said Taruc. “What would it look like if the people in the Santa Cruz community—not corporate lawyers and CEOs—decided which trees to trim, where to place microgrids, and how to keep power flowing to our homes?”

PG&E spokesperson Mayra Tostado said the trees at 2375 Pine Flat Rd. were identified via routine inspections as being weak or structurally damaged.

“Because of the proximity of these trees to our energized transmission lines, these hazards need to be cut down in order to mitigate risk of the trees falling into the lines should they fail,” she said. “These mitigation measures protect our communities that we have the privilege to serve, from unplanned outages, wildfires, electrocutions and other hazards and injuries.”

In fact, several trees being removed have wonky trunks that fork, or bark that turns in on itself, leading to a precarious situation, she said.

“For other trees, they are incompatible with the continued safe and compliant operation of the transmission lines based upon their proximity to lines and are currently encroaching within the safe operation of the facilities and, therefore, need to be cut down,” she said.

“PG&E will not put the wires underground,” he said. “All they have to do is put a conduit on the other side of the road and put the wires in it and they’d have no more trouble.”

He said he likes the idea of bringing in a new power company to handle things.

“God let those trees grow so nice,” he said, while out for a walk with one of his huskies. “The shame of it is cutting down the beautiful trees because of the wires.”

Days after sending a message to Supervisor Ryan Coonerty, Hong traipsed down to the Santa Cruz County Board of Supervisors meeting Nov. 16 to speak during public comment period.

His fiery demeanor had been replaced with a gloomy one.

He described how tormented he’s been listening to the woodchipper from his home.

“When a tree falls, you can’t take it back,” he said. “It’s extremely distressing.”