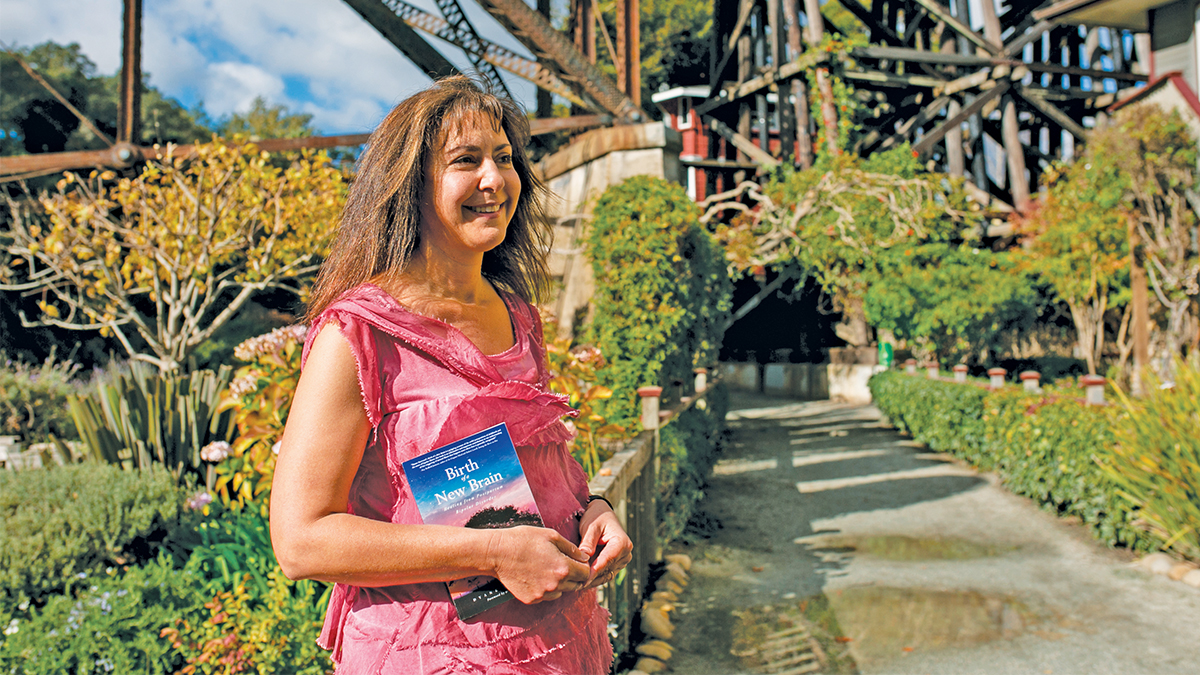 When Santa Cruz’s Dyane Harwood gave birth to her second daughter Marilla, she looked into her baby’s eyes and felt elated. After a pain-free birth to a healthy child, her happiness was understandable, but within hours her mood took a disturbing turn. Wildly energized, she talked nonstop while her thoughts raced. Even though she was exhausted, she felt little need to eat or sleep.

After she got home from the hospital, she began to display signs of hypergraphia, writing incessantly on her computer, in notebooks, on her arm, and on the wall, even while her baby needed her undivided attention. Harwood knew something was wrong, but as she tried to focus on her daughters, she downplayed what she didn’t realize were symptoms of mental illness. Harwood had become hypomanic, and soon these symptoms would threaten everything she cared about.

In her new memoir, Birth of a New Brain: Healing from Postpartum Bipolar Disorder, Harwood lays out the frightening reality of an often-unrecognized illness. One or two cases of postpartum bipolar disorder occurs for every 1,000 live births, according to the National Institute of Health. But in 2007, when her disease was triggered, even postpartum depression—which we now know occurs in at least 15 percent of new moms—was considered an outlier. According to the American Psychological Association, it’s still underdiagnosed by clinicians, along with other postpartum mood disorders, such as anxiety, panic, OCD, post-traumatic stress, and psychosis. Symptoms may appear at anytime during pregnancy or in the first year of motherhood.

Harwood believes her bipolar disorder was latent, triggered by a combination of pregnancy, labor, hormones and genetics. Salle Webber, who was Harwood’s postpartum doula, agrees.

“When these things occur, much of it has to do with hormonal changes in the body, chemical changes in the brain, and the demands on mothers to suddenly be in complete service to a tiny human being,” says Webber, author of The Gentle Art of Newborn Family Care: A Guide for Doulas, which includes a chapter on mental health and postpartum mothers. “Their whole physiological being is disrupted.”

As for genetics, Harwood points to her father, a professional violinist and Fulbright scholar, who suffered from bipolar disorder, which infused her childhood with a sense of fear and sadness. She remembers calling him when she was first hospitalized. “He started to cry when I told him about my diagnosis,” she says, “because he didn’t want me to go through the misery that he’d been through.”

Harwood, who will discuss her book at a Dec. 7 event in Ben Lomond, says her experience was a worst-case scenario causing prolonged hardship.

“It took me seven years to stabilize. That’s a long time. I had to be hospitalized seven times,” she says. Then when her father died in 2009, the major event triggered suicidal thoughts, and Harwood opted for electroconvulsive therapy (ECT), a controversial procedure that she credits with saving her life. She tried tapering off lithium medication in 2013, as many people with bipolar disorder do, she says, but it launched her into a deep depression. She turned to ECT again for help, and it worked.

The biggest impact for her, she emphasizes, has been finding the right medication. She now takes what she calls an “old school” combination of drugs—lithium and a monoamine oxidase inhibitor called Parnate. “They’re often written off,” she says, “but for me, they ended up changing years of symptoms in three days.”

Webber says that one of Harwood’s biggest gifts to her readers is showing the simple power of asking for help. “So many women aren’t able to do that, and they’ll benefit from Dyane’s courage,” Webber explains. “If there’s ever a time when a woman should ask for help, it’s when she’s given birth.”

As she recovered, Harwood searched for lifestyle changes to help her heal. Her Scottish collie, Lucy, has been “a huge comfort,” she says. “I encourage everyone to get a pet. Even a fish,” she says.

Harwood has also embraced forest bathing, a practice developed in Japan that promotes spending time outside surrounded by trees as a way of healing. “Being in the redwoods and getting all these wonderful natural chemicals—the smell, the beauty, it’s helped me a lot.” And Harwood swears by regular exercise, something she used to do “for vanity,” she concedes. “But what motivated me in the calm after the storm of my bipolar experience is how much it affects brain health and stabilizes mood,” she says.

Harwood believes simple changes in pre- and postnatal care, like better observation and screening practices, could further improve the lives of many young families and make everyone safer.

“Simply screen women who are or want to become pregnant to find out if there’s a family history of mental illness,” she says. “If there is, pay closer attention during and after pregnancy. It’s getting better, but there’s still a long way to go.”

Harwood says she’s grateful that her marriage and the family she loves have remained intact in the face of extreme challenges. She’s also proud of her accomplishments in the wake of serious personal struggles. She’s founded a local chapter of the Depression and Bipolar Support Alliance, which facilitates free support groups.

Harwood has also written articles about postpartum bipolar disorder, in addition to her book. “As a reader, I couldn’t find anything out there about what I was going through,” she says. “Writing it gave me a sense of purpose, because I felt like this could really help people.”

Harwood will talk about postpartum bipolar disorder during a book signing on Thursday, Dec. 7, at Park Hall Community Center, 9400 Mill St., Ben Lomond. The event is sponsored by Valley Women’s Club and the Santa Cruz County chapter of the National Alliance on Mental Illness. For more information, visit dyaneharwood.com.

Next ArticleWhat makes you want to play hooky from work?