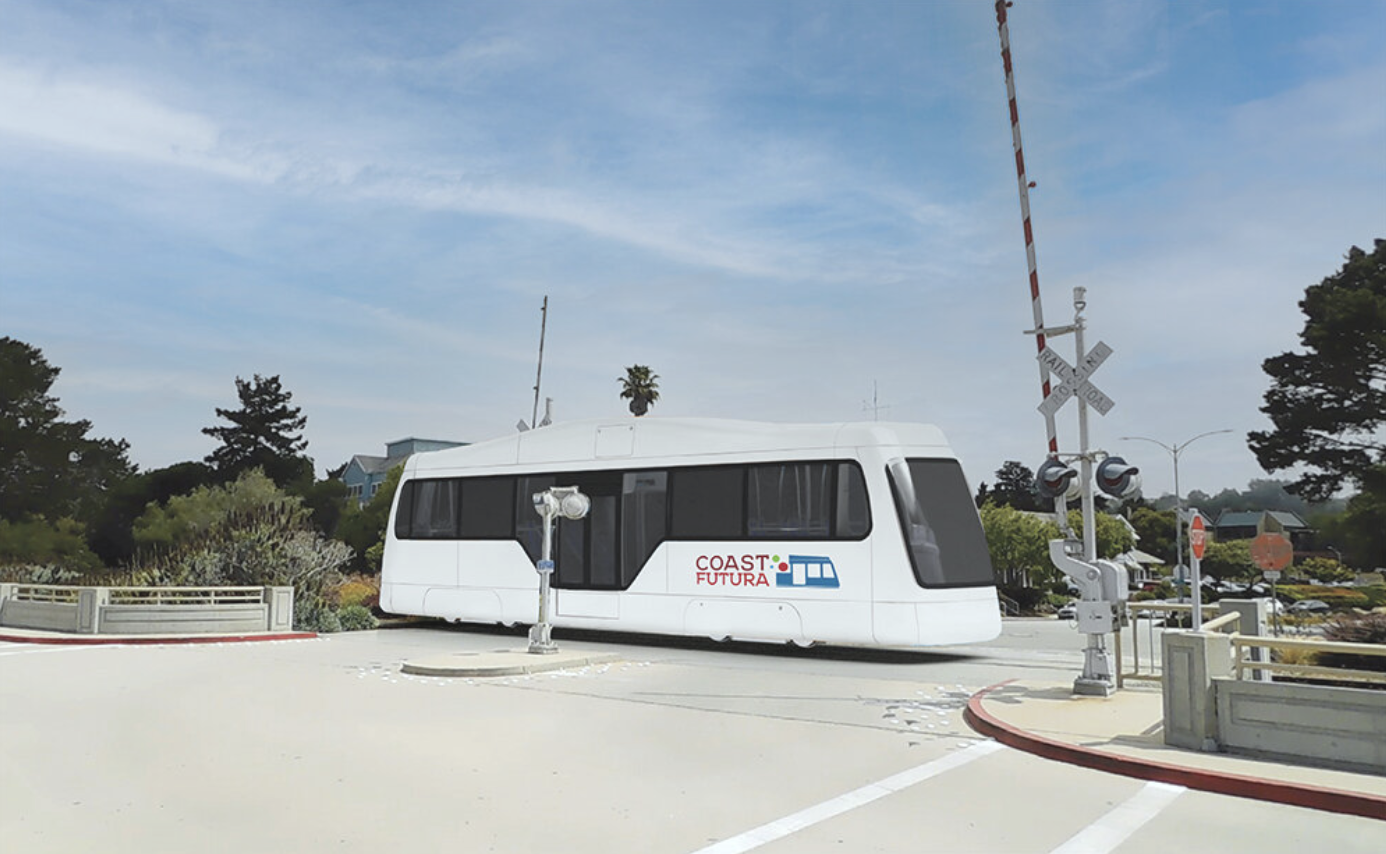 WATSONVILLE—This weekend residents will have the opportunity to ride on a clean-energy, accessible streetcar along a section of the Santa Cruz Branch Rail Line in Watsonville.

Members of Coast Futura, an alliance of people from various other county organizations, organized the demonstration with Roaring Camp Railroads to give the public a chance to see and experience a vehicle that could possibly travel between Watsonville and Davenport in the future.

The ViaTran streetcar was manufactured by California-based TIG/m, LLC. The vehicles are wireless, battery-dominant hydrogen fuel cell hybrids that could move quietly through neighborhoods alongside the Rail Trail, portions of which have been completed or are in progress.

“A lot of people have misconceptions that a train is going to be stinky, smelly and loud,” said Trink Praxen, a volunteer with Coast Futura. “It’s important for people to get a chance to see it go through town, how it could possibly fit into our community.”

The Santa Cruz County Regional Transportation Commission (RTC) has for years been investigating alternatives that could be used on the rail corridor. Earlier this year, a plan was finalized focusing on two options: Passenger Electric or Electric Light Rail (ELR).

However, things changed after new RTC board members were elected. A once unanimous adoption was suddenly a 50/50 vote.

“This is why we’re coming in and saying, ‘Let’s look at what this light rail could actually look like,’” Praxen said, “and hopefully encourage the RTC to form a majority again and go back to adopt both a trail and rail.”

Volunteer Iwalani Faulkner alluded to an ongoing investment effort by the State of California to connect cities by ELR. In early 2021, Gov. Gavin Newsom issued an executive order stating that electric light transportation is the number one priority to address transit pollution.

“And if you look at that documentation, our portion—from Davenport to Watsonville—is noted several times as an important part of that network,” Faulkner said. “The amount of money that could possibly be coming to our county is close to a billion dollars.”

But that money, she said, is only accessible when the county approves the RTC business plan.

“We can apply for these funds. And we’ve already put money in through taxes,” she said. “If we don’t use them, we’ll lose them.”

The ViaTran is considered “ultra light,” meaning it is much lighter than older systems, using a fraction of the energy of ones using rubber tires/tracks. The vehicles do not require overhead wires or any type of wayside power systems, resulting in savings of up to 50% in construction and maintenance costs.

TIG/m has installed the systems in cities around the world, from Las Vegas to Dubai, and won multiple Global Light Rail Awards. And if implemented in Santa Cruz County, local energy company Central Coast Energy would be on board to produce the energy required.

But the ViaTran is not the only option Coast Futura is looking into. Faulkner said they want to bring in other systems to demo in the near future.

“We’re looking at [ViaTran] because it doesn’t have the overhead wires, meaning there would be a huge savings to implement it,” Faulkner said. “And we have the tracks—there just needs to be some fixes along the line.”

This Saturday and Sunday, guests can ride the ViaTran between the hours of 9am and 5pm, starting at the intersection of Walker and West Beach streets.

Pre-order tickets are currently booked. However, there may be some tickets available in-person, and people can also get on a waitlist if signed-up riders do not show.

Residents can watch the streetcar go by near the Second Harvest Food Bank building along Ohlone Parkway, on Beach and Walker Streets, or the Rail Trail portion between Ohlone and Walker.

“That alone will give you a sense of how quiet it is, how beautiful, sleek and efficient,” Praxen said. “It’s important for people in Watsonville to see what this will look like. And to imagine … being able to commute into Santa Cruz, to Cabrillo College or UCSC … to transverse our county on something like this, instead of having to get in a car or taking that long bus [ride]. I think it’s an exciting prospect for Watsonville.”

Added Faulkner: “What we are doing on our cramped highway right now, in our little Santa Cruz County … is very impactful. It just has to change.”

Another demonstration will be held next week (Oct. 21-24) in Santa Cruz, between the Santa Cruz Beach Boardwalk and the Capitola Bluffs. Again, preorder tickets are sold out, but some may be available the day of.

A bike valet will be available for attendees of both events.

Faulkner said that increasing transportation alternatives is vital in the midst of the ongoing national public transit crisis.

“A lot of people can’t afford a car, but they still need to get to work, school, and other events,” she said. “The more we boost public transit, the more it will help these people.”

For information about Coast Futura, visit coastfutura.org or call 335-4484.