.The End of Sidewalk Vending 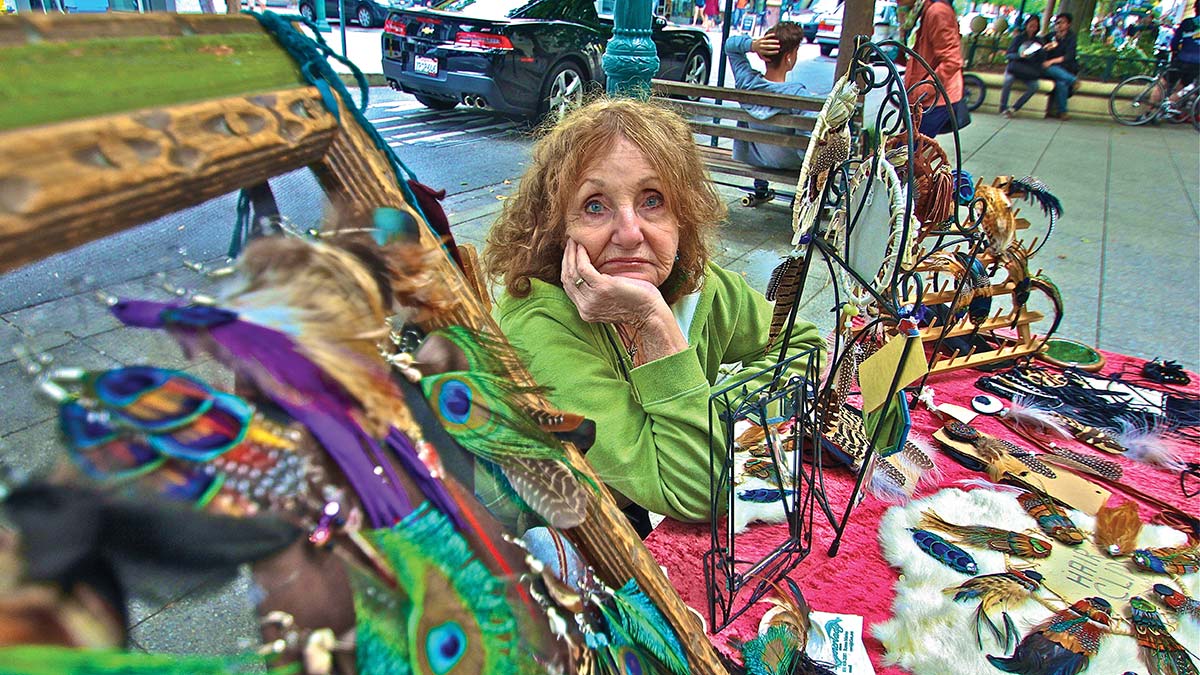 Eddie Jauregui has been setting up a table on Pacific Avenue every day for the past three years to sell stones wrapped in wire.
The 21-year-old street vendor has lived in Santa Cruz most of his life. Creating DIY jewelry, he says, has provided him a way to connect with other people. His trips downtown as a child inspired him to pursue art, he tells GT, clutching a wire-cutter in his right hand and a wire-wrapped amazonite stone in his left, while people stop to admire his collection.
But in a few weeks, Jauregui’s sidewalk jewelry sales will become illegal under a city law adopted by the Santa Cruz City Council on a unanimous vote last month.
Street vending rules have been in fluctuation for more than a decade.
On Pacific Avenue, the city has had “exempt zones,” since December 2014, allowing people to table and perform within painted boxes on the sidewalk without being hassled or ticketed by police. Originally, there were 63 color-coded zones on Pacific—some for political tabling and others for performing. The city later cut the number of zones by more than half, and chose not to distinguish their uses. The latest rule update, which goes into effect later this month, increases the number of blue boxes from 27 to 30.
The problem is that “commercial vending” has never been allowed on Pacific Avenue. The new law has specifically defined the practice as it hadn’t ever been before. Scott Collins, assistant to the city manager, says the old language was too vague and didn’t provide police officers and downtown hosts a concrete sense on what constituted commercial vending versus First Amendment-protected freedom of expression.
“From a legal perspective, if we wrote a ticket for commercial activity, the judge would throw it out,” says Collins, who helped draft the ordinance. “We were seeking a way to uphold something council approved long before this.”
Collins argues—as does Chip, the executive director of the Downtown Association—that the atmosphere downtown has transformed into one that is less friendly to tourists and business owners. Collins calls it a “flea market effect.”
Vendors like Jauregui assert that the “spirit of Santa Cruz” is in danger, and that downtown is known for its unique vendors. He sees himself as an artist who’s trying to “spread positive vibes” and share his love for stones with the community.
“When I was growing up, I was inspired and looked at Santa Cruz as this art hub, as being a place of inspiration for artists, and I feel like they’re trying to destroy the spirit of Santa Cruz,” says Jauregui. “We’re just here doing art and being positive, I don’t see why they want to stop us.”
The new rule lists crystals, rocks and geodes among the 22 items that constitute the now-outlawed “commercial vending.” The list ranges from auto parts to stuffed animals. It’s essentially anything that has “more than nominal utility,” according to the law.
“What has happened over the years is that anyone can come and sell anything and say it’s artistic expression,” says Chip. “There is no legal standing to say whether or not it is, so the sidewalk has become overfilled with people selling all types of things.”
Vendors will still be allowed to sell items they created themselves—like books, paintings and photographs—within the exempt zones. The main issue here is a concern about fairness, Collins says. Homemade jewelry poses more competition to brick-and-mortar businesses, he says, than people selling one-of-a-kind pieces of art would.
“Business owners pay significant rent and overhead, things that benefit our community, and at the same time you have individuals selling the same items,” says Collins.
City and business leaders have grappled with defining what is and isn’t art, because courts have often supported an individual’s right to sell one’s artwork as a form of artistic expression, protected under the First Amendment. Councilmember Micah Posner doesn’t see wire-wrapped stones and crystals, for instance, as particularly creative. “The quality of artistic expression on Pacific Avenue has gone downhill, and so in my mind, most of what I see downtown isn’t very inspiring,” says Posner. “People are wrapping geodes and calling it jewelry.”
At the same time, while Posner understands business owners’ concerns, he doubts they are losing money as a result of street vendors.
Henry Pikoos, owner of World of Stones and Mystics, has been in the stone-game for 35 years and opened his downtown location two years ago. While he doesn’t like the idea of “guys selling crystals and stones while I pay taxes,” he admits the news of the law passing made him feel heartsick.
“The guys out there, they’re not conforming, but they’re out there trying to make a buck to survive, so this is going to have a dramatic effect on them and I feel for them,” says Pikoos, whose business is on Front Street.
“To be honest,” he adds, “I don’t think it really ever affected my business.”