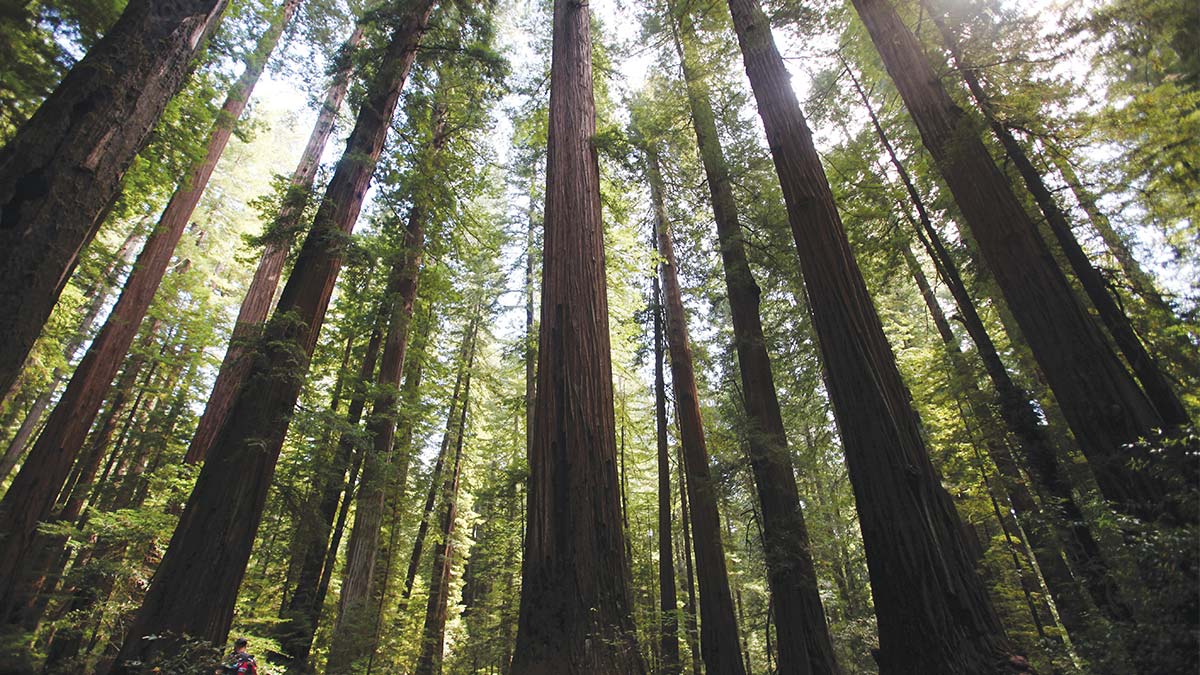 After an era of relative quiet compared to the so-called timber wars of the 1980s and ’90s, conflict over logging in the forests of parts of Northern California has returned.

A plan to log 100- to 150-year-old redwood trees across 320 acres of northwestern Sonoma County has generated fervent opposition from environmentalists and residents over the past year. Clearcutting of 5,760 fire-impacted acres in the Klamath National Forest kicked off in April, much of it on land previously designated as endangered species habitat.

The indigenous people of the area, the Karuk tribe, worked with local environmentalists to craft an alternative plan, but the Forest Service largely ignored it. The Karuk and the environmental groups have filed a lawsuit in an attempt to scuttle the logging. Last month, Karuk tribal members and local activists blocked the road leading to the logging in an effort to slow the logging operations pending a legal judgment.

During the last period of conflict 30 years ago, environmentalists curtailed some logging operations by setting aside talismanic stands of old-growth redwood trees in parks and preserves, and by pointing out that forests provide important habitat to numerous species, many of them endangered, including northern spotted owls, marbled murrelets and coho salmon.

California is home to some of the most prodigious forests on Earth, but the state’s lumber production has steadily declined since the 1950s. A similar trend also occurred in other western states. But now logging companies are coming back to pick over what remains.

“Companies have come in and gotten up to a 16 percent return per year on their timberland, but the forests are only physically capable of yielding about 1 percent per year over the long run,” says Richard Wilson, the former director of California Department of Forestry and Fire Protection (Cal Fire), which regulates timber harvests on the state’s private lands.

As a result, soil that once grew trees in the forest has washed into streams, choking vital fish habitat. The trees that remain—many third-, fourth- and sometimes even spindly fifth-growth replacement trees—hold back less floodwater, provide far less animal habitat and sequester far less carbon dioxide.

Even so, timber remains a major industry in California, particularly in northern counties like Humboldt, Shasta, Siskiyou and Mendocino, which account for about half the state’s timber harvest. Roughly 20 percent of that harvest currently occurs on public lands.

During Wilson’s tenure at Cal Fire (1991-1999), he sought to address the problem of over-harvesting by requiring that timber companies file 100-year management plans for sustaining the volume of timber in their forests, called “sustained yield plans.”

But the industry has used its political clout to undermine these regulations, he says, so much so that a large proportion of the state’s remaining timberlands continue to be degraded by companies like Sierra Pacific Industries, California’s largest timber company, which owns 1.8 million acres and relies heavily on clear-cutting.

“We’ve got the rules,” Wilson says. “It’s a question of enforcing them.”

These sorts of struggles are playing out across Northern California and will shape the long-term well-being of rural economies, the health of local ecosystems and the wellbeing of indigenous cultures.

The conifer-rich “Pacific temperate rainforest,” which extends up to Prince William Sound in Alaska, contains the largest mass of living and decaying material of any ecosystem in the world on a per-unit basis. That prompts many scientists and environmentalists to view their maintenance and restoration as crucial in the fight against global climate change.

The Marble Mountains are among the ecological jewels of Northern California’s national forest system and home to numerous old-growth conifer stands. In the 1990s, the U.S. Forest Service set aside many mature forest habitats as reserves for the benefit of old-growth-dependent species, such as the northern spotted owl, which is listed as threatened under the Endangered Species Act.

In 2014, a series of wildfires known as the Westside Fire Complex burned across 183,000 acres of the broader region, most of it in the Klamath National Forest. In response, the Forest Service has designed timber sales that include more than 5,700 acres of clearcuts, including fire-killed and living trees, many of them occurring in the mature forest reserves or on steep slopes above streams federally designated to promote the long-term survival of coho salmon.

The Forest Service often auctions off fire-impacted lands to timber companies for “salvage logging.” The Westside Plan is the largest post-fire timber sale in the recent history of northwestern California.

Klamath National Forest supervisor Patricia Grantham says that the standing dead trees in the forest pose a major long-term fire hazard. By aggressively logging these areas of the forest, her agency is supplying logs to local mills and biomass power plants, contributing to the long-term health of the forest and protecting local residents’ safety.

“When fire returns to the area in the future, it will be smaller and less severe because of the actions we’re taking on the landscape today,” Grantham says.

But environmentalists and tribal members regard the Westside Plan as a giveaway to the timber industry of historic proportions.

“The Westside [Plan] is absolutely the worst project I’ve ever seen in Pacific Northwest national forests,” says Kimberly Baker, of the Arcata-based Environmental Protection Information Center (EPIC). She has been monitoring timber sales on national forests for the past 18 years.

The Karuk tribe, EPIC and three other environmental groups have filed suit in federal court to challenge the project. Logging began in April, and it is unclear how much of the land will remain intact when the judge reaches a verdict. The U.S. Fish and Wildlife Service has also expressed skepticism regarding the Forest Service’s proposal, noting that dead trees “greatly improve” the quality of habitat for spotted owls and other creatures as the forest naturally recovers over time.

According to Fish and Wildlife’s estimate, the Westside Plan could lead to the deaths of 103 northern spotted owls—at least 1 percent of the species’ entire population.

Many of the slopes where the logging is occurring are among the most unstable in the Klamath National Forest. They also happen to be right above several of the Klamath’s most important salmon-bearing streams. By removing anchoring vegetation and carving a spider-web pattern of roads and log landings, the logging threatens to bury the streams with silt.

The Karuk tribe worked with environmental groups to develop an alternative plan that would rely on prescribed fires to regenerate the land over the long run. Logging would be confined to ridgelines, for the purpose of developing fuel breaks, such that some logs would still feed local mills. Much of the Klamath Forest is the Karuk’s aboriginal territory.

The Forest Service’s Grantham says she incorporated most of the Karuk’s input, but Karuk tribe natural resources adviser Craig Tucker says that simply isn’t true. “In reality, the Forest Service basically told us we can go pound sand,” he says, regarding the agency’s response to the Karuk management plan.

According to public records, the Forest Service has spent approximately $24 million developing the Westside logging plan and is auctioning most of the logs for a paltry $2.50 per truckload, thus generating only about $450,000 in revenue for the agency.

Next ArticleHow would you describe the Santa Cruz community?