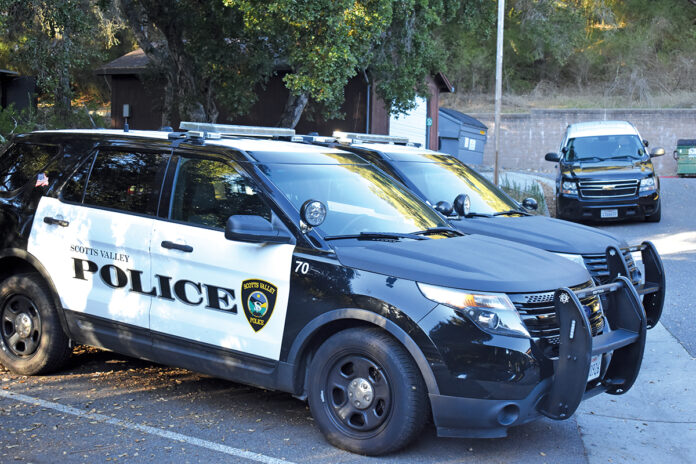 While David Ball’s complaint is primarily centered on the assertion he was discriminated against because of his age, the Santa Cruz County Superior Court civil action against the city of Scotts Valley and Chief Steve Walpole, Jr. paints a picture of a department with a “hostile work environment” where time card fraud, sleeping on the job and retaliation by the human resources department were tolerated.

Ball, a 27-year veteran of the force, contends that multiple members of the City Council, including his former SVPD superior, Councilwoman Donna Lind, should’ve recused themselves when it came time to consider the appeal of his ouster.

“Mr. Ball believes that he was discriminated (against) based on his age and that the City and City Council have rampant corruption, nepotism issues and inappropriate conflicts,” his lawyer, Neil Berman, of Salinas-based Rucka, O’Boyle, Lombardo & McKenna, said in an interview. “He fears for the citizens of Scotts Valley as they have inept leadership, in his view.”

Lind, who is identified in the lawsuit as Walpole’s godmother, declined to comment for this story, referring questions to the City’s legal department.

City Attorney Kirsten Powell said Ball “was rightfully terminated for cause after a full investigation and evidentiary hearing.”

The City “denies all allegations in his two suits against the City and is prepared to vigorously defend the City’s actions,” she said.

In a complaint filed Aug. 13, Ball says he’s owed $67,200 for “special assignment pay” refused from 2007-2019 when he was fired, despite a younger officer receiving such compensation for similar work.

City Council voted earlier this year to adjust SVPD pay scales so more junior officers aren’t paid more than superiors, as had occurred in some cases.

The department has struggled with staff retention in the last couple of years, although it’s successfully hired several officers in recent months.

Ball claims colleagues turned against him in the wake of the suicide of former officer John Cahill.

Ball says his superiors resented him and felt he contributed to Cahill’s suicide.

In an article for cnn.com, Cahill’s dad said his son killed himself because he “was distraught about the failure of his marriage, his financial problems and the possible impact of the divorce” on his family.

Chief Walpole did not respond to a request for comment for this article.

Ball claims a younger officer who made sexually-explicit comments to a subordinate and sent a sexually-explicit message to a female dispatcher was never investigated or reprimanded for his actions. That same officer was discovered committing potential timecard fraud, something the employee wasn’t penalized for, the lawsuit also states.

In another case, a female trainee who made TEAM COCK BLOCK (The letters TEAM followed by a picture of a rooster and a stop sign) T-shirts for fellow officers had them confiscated when a male officer was offended by them and reported this to Capt. Mike Dean, according to the complaint.

The lawsuit claims this employee was never investigated for possible sexual harassment, however, when she learned she’d been reported for “regularly sleeping on duty” and other job performance issues, the suit states, she made up a story about Ball sexually harassing her “within hours,” leading to his firing.

Ball, in the suit, says his relationship with Walpole started to sour when he told his wife about something unprofessional Walpole had said to him.

“I don’t even like anyone here,” Walpole told him, he claims. “These are just people I work with.”

According to the lawsuit, another officer overheard Ball tell his wife about this, and he reported the conversation to HR Director Tony McFarlane.

McFarlane shared this with Walpole, who threatened to investigate Ball, and later retaliated against him, the complaint states.

From then on, Walpole was set on getting rid of Ball, according to the complaint.

Ball says even if the verbal sexual harassment allegations against him were true, according to the City’s own employment policies that wouldn’t necessarily require that administrators fire him from his job.

On May 24, 2019, Ball was placed on paid administrative leave by Walpole, who was serving as acting city manager and police chief at the time, while he was investigated.

“Mr. Ball maintains that the City committed age discrimination and their handling of the matter was akin to a kangaroo court with multiple conflicts of interests where Chief Walpole should have recused himself during the investigation and City Council members should have recused themselves during the farce that was the administrative proceeding,” Berman said.

According to simasgovlaw.com, “The Skelly Review Officer must be ‘reasonably impartial and uninvolved’ from the underlying facts and circumstances of the employee. However, they are typically still employees of the same public organizations; maybe just from a different unit.”

In order to prevent Ball from getting unemployment benefits, Walpole submitted a written declaration, dated Jan. 10, 2019, that improperly disclosed confidential personnel information in violation of Plaintiff’s POBAR (Public Safety Officers Bill of Rights Act) rights, despite the appeals process just beginning, according to the complaint.

“Chief Walpole was jealous of him,” Berman said, characterizing his client’s position. “Chief Walpole had a personal conflict and vendetta against him and his family.”

Berman says Ball wants a jury to consider the evidence in the case.