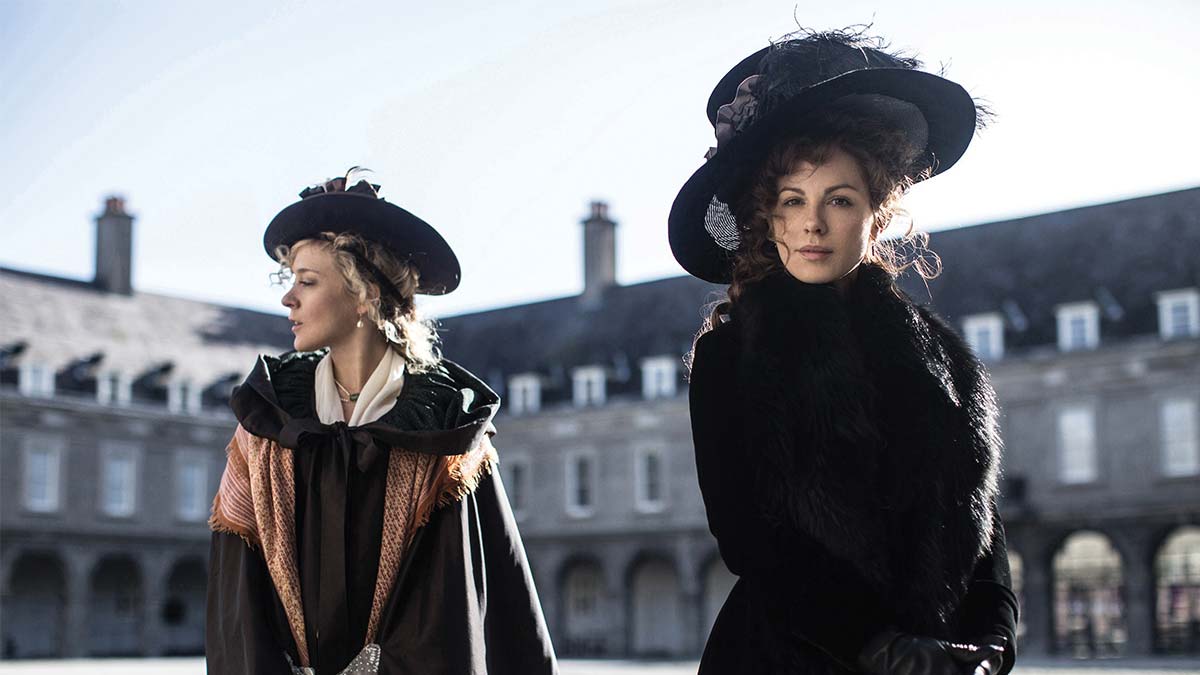 Whit Stillman, perpetrator of ironic ’90s preppy angst (Metropolitan; The Last Days of Disco), may not be the most obvious filmmaker to adapt Jane Austen. But it’s a good fit in Love & Friendship, Stillman’s adaptation of the early Austen novella Lady Susan. Stillman’s films are also comedies of manners, but in crafting a script from Austen’s precise observations, the filmmaker has learned some of the author’s wit and subtlety, while tossing out the vapid whining that so often mars his modern films.
The novella was written in the 1790s, well before the Regency era of Austen’s prime as an author. (It was revised ca. 1805, but not published until 1871.) The story contains the classic Austen elements—a comely widow, her teenage daughter, their relations, a couple of eligible bachelors, and a manor house in the country. Along with Society, practically a character in the drama, whose strict rules must be obeyed, or, at least, not too obviously flaunted, at all costs.
Stillman begins at too breakneck a pace, eager to get to the good stuff; he shuffles out characters like a blackjack dealer’s cards, with droll onscreen captions, before we have any idea who anybody is. But characters, their personalities, their relationships to each other, and their private agendas all sort themselves out soon enough.
Lady Susan Vernon (played to scheming perfection by Kate Beckinsale) is a beautiful young widow without income, making the rounds of the country houses of her friends and relations after the death of her husband. “We don’t live [anywhere], we visit,” she explains. Her daughter is away at a boarding school, whose fees Lady Susan deems too “ridiculous” to pay. After a scandal at her last residence, where she charmed the husband away from her hostess, Lady Susan arrives at the home of her tremulous sister-in-law, Catherine (Emma Greenwell), whose brother, dashing young Reginald de Courcy (Xavier Samuel) is a frequent visitor.
No sooner has Susan struck up a dalliance with the smitten Reginald, than her timid daughter, Frederica (Morfydd Clark), arrives in flight from school. (Sighing over the complexities of parenthood, Lady Susan notes, “When children are little, there’s a kind of sweetness which compensates for the dreadfulness that comes later.”) Alas, poor Frederica is just another pawn to be moved in her mother’s master plan.
Which is to see her daughter married well to a wealthy, titled neighbor Frederica doesn’t want, as she confesses to Reginald, on the grounds that he’s too silly. Indeed, the prospective groom is Sir James, brilliantly played by Tom Bennett as a genial fool whose absolute cluelessness would be appalling if he wasn’t so good-natured. And when these plot complications become too dense, Stillman hies Lady Susan off to London to explain her plans and their effects to her friend and confidante, Alicia (Chloe Sevigny).
In Lady Susan, we see a blueprint for the later Austen character, Emma Woodhouse (of Emma). Emma, too, is full of schemes, determined to manage the lives of everyone around her. The difference is that Emma has an extra psychological dimension that makes her capable of softening her opinion of her own superiority when she sees how her matchmaking has gone awry, and the unhappiness that ensues.
Lady Susan, however, is incapable of remorse. She sees the misery her schemes cause to others (especially her daughter), and she doesn’t care, as long as she achieves her aims—to see herself comfortably settled, yet still free to pursue her pleasures. She is the character in its raw state, selfish, manipulative, and sly enough to blame “the ill-nature of the world” if anyone dares to find fault with her.
But, as is always the case with Austen, the underlying theme beneath this frivolous-seeming plot is the powerlessness of women in this world without the security of money, or the protection of marriage. Lady Susan is not simply a predator; she’s a realist who understands she must keep subtly rewriting the rules in order to win the game, and has the wit and audacity to do it. She is not one of Austen’s admirable heroines, but she may be one of the most entertaining.