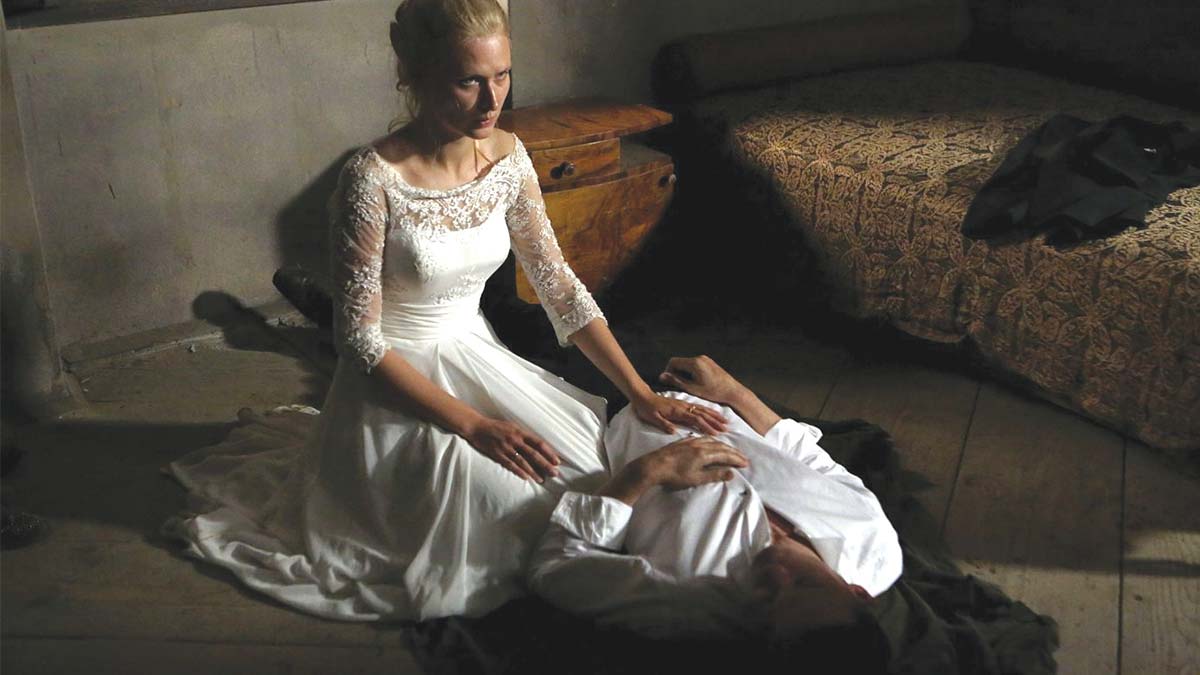 Despite the title, it’s not quite correct to classify Demon as a horror movie. On the one hand, yes, it deals with the supernatural. But here in the States, what we call a horror movie generally involves randy teens in jeopardy, and oceans of blood gushing like Old Faithful all over everything.

In Demon, Polish filmmaker Marcin Wrona takes a much different approach. With centuries of history, culture, folklore and tradition to draw from—not to mention a sure grasp of allegory and metaphor—he layers on texture and meaning, drawing us into a world of mysterious images, and complex, yet subtly handled themes. As the story unspools, mostly over a single day and night’s wedding celebration, Wrona steadily winds up the tension without resorting to the gore and shock tactics we usually associate with the genre. Instead, Wrona creates an increasingly eerie atmosphere, and a sense of menace so profound, it keeps us engrossed right up to the last frame.

Piotr (Israeli actor Itay Tiran), who has been working in London, arrives by ferry at an isolated Polish village to be married. (Tiran is excellent as his role becomes ever stranger and more complex.) His bride-to-be, Zaneta (Agnieszka Zulewska), is the daughter of a local bigwig, a construction magnate (Andrzej Grabowski) who has gifted the couple with his own father’s home, a deserted old house out in the country, uninhabited for years.

With a bulldozer delivered to the property, Piotr accidentally dislodges a tree—and finds what look like skeletal human remains buried underneath. Startling visions follow, but his groomsmen arrive the next morning to prepare him for the wedding before he can tell anyone. After the church ceremony, the reception is held in a huge tent erected next to the old house, and as the celebration wears on into the night, strange things happen.

After a quick tryst with Zaneta, Piotr loses his wedding ring. He keeps seeing a mysterious young woman on the periphery of the party that no one else can see. When Piotyr himself starts having convulsions on the dance floor, his new father-in-law, with assorted cohorts, drags him off to the barn and orders more liquor to be served to the guests as a cover-up, hoping they won’t remember what they saw.

The bride’s father, the priest, the drunken village doctor, and the professor, an elderly Jewish man who has lived in the village all his life, try to figure out what’s going on. If there are no medical or psychological explanations for Piotr’s behavior, the specter of demonic possession is raised. The professor offers up the notion of a dybbuk, an unquiet spirit out of Jewish folklore that exists “to purge its own soul” of business unfinished in life, but also the soul of the possessed.

As the party progresses and more vodka is consumed, tongues loosen and polite facades begin to crumble. Village men grumble about Zaneta going out of the village to find a husband. The professor reveals that the entire village was once a thriving Jewish shtetl but it was destroyed by the Germans—along with most of its families and the only bridge to the outside world. At dawn, Zaneta’s father makes a drunken speech to whatever remaining partygoers have not already passed out, encouraging them to forget everything they’ve seen. “You were never even here,” he tells them. “None of us was ever here.”

It’s clear that the entire village, not just the possessing spirit and the possessed, has unfinished business to purge. More literal-minded viewers may complain that the finale offers no clear-cut “explanation.” But the more I thought about it, the more I realized that that’s what I loved about this movie, that the audience is invited to supply its own interpretations, building on all the rich themes that Wrona introduces. You get out of Demon what you’re willing to bring to it. Wrona may not supply all of the answers, but he gets us to ponder the most interesting questions.

With Itay Tiran, Agnieszka Zulewska, and Andrzej Grabowski. Written by Pawel Maslona and Marcin Wrona. Directed by Marcin Wrona. Not rated. 94 minutes. In English, Polish and Yiddish with English subtitles.