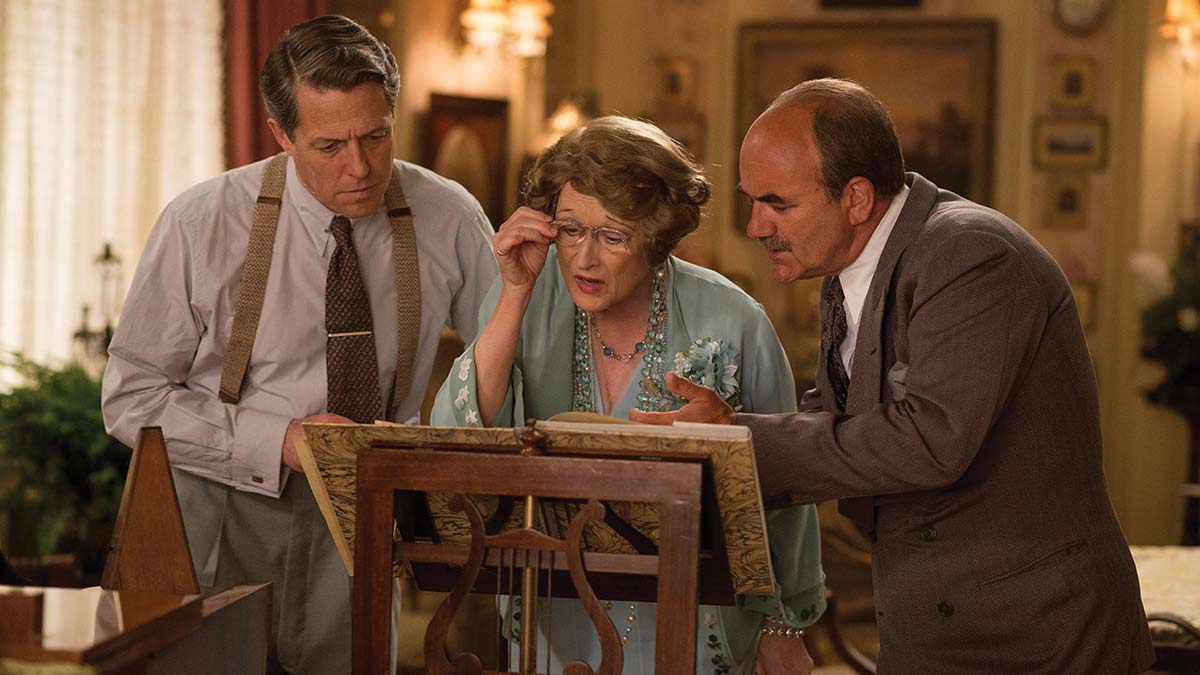 Something that’s really perfectly awkward is, in essence, perfect. Florence Foster Jenkins is Stephen Frears’ biopic of a show-business legend who deserves her place next to the Shaggs and Ed Wood. Meryl Streep certainly sentimentalizes this deluded woman’s life, but she also honors it.
Frears is crafty, not letting the cat out of the bag until the right time. It was fun to watch FFJ in a theater full of people not acquainted with the legend of Jenkins, an opera singer whose reach truly exceeded her grasp. And, as per the Browning verse, Frears sends this provocative singer to heaven.
We open at the Verdi Club in Manhattan in 1944, where the well-off Ms. Jenkins is entertaining the big city culture vultures. Her husband, St. Clair Bayfield (Hugh Grant), a former actor, massacres a little Hamlet as an entr’acte before his wife and patroness Florence Foster Jenkins (Streep) assumes the stage. The hefty lady is the center of a playlet about the winged Angel of Inspiration visiting Stephen Foster, to bestow “Oh, Susanna!” upon him. (Happily, this was a real thing—Jenkins’ penchant for wearing angel wings on stage was due to her appearance as the star in this tableau.) The night is a success, though Florence is not a healthy woman and has to go to bed early. St. Clair leaves to go spend the night elsewhere.
Jenkins is a patron of the conductor Toscanini (Christian McKay) who’d rather look the other way when Florence tries to get practice as a mezzo-soprano. She hires an accompanist, Cosme McMoon (Simon Helberg of The Big Bang Theory, the movie’s real standout); he little realizes he will be playing for a singer who is so cataclysmically off-key. Jenkins’ career soars, greased with the help of her own money. She trades small practice rooms for the largest stages in New York, and her rise is contrasted with McMoon’s terror.
There used to be an expression, “all his features were working,” to describe someone barely able to conceal their emotions. The explosively funny Helberg recalls such masters of working-features comedy as Eddie Bracken and Gene Wilder.
The handsome digitized recreations of midtown New York are charming. Frears speeds it along with wipes, one scene elbowing another to the side. Passages of effective farce emerge—Grant hiding his mistress from an unscheduled visit from his wife, while McMoon, half-dressed and walloped by his first hangover, tries to endure the surprise. But FFJ also contains the kind of farce that doesn’t snap—some labored business of St. Clair trying to hide all the newspapers containing a scathing review of Florence’s recital, written by a reporter who will become a big-name gossip columnist, Earl Wilson (John Cavanagh).
The film suggests that only disease could explain this remarkably strange career. And the serious turn of Nicholas Martin’s script is, ultimately, payback for the funny parts. Despite her reputation and her Oscars, Streep has greater gifts for comedy than tragedy—she’s most watchable when thwarted or fogbound or fatuous, with her gaga pussycat smile revealing pearly little teeth. She dresses for this part in a Mad Carlotta mantilla or a turban worthy of the one the Three Stooges’ Joe de Rita wore when impersonating a sultan. Streep does have a keen tragic moment—a pitiful phobia that shakes her suddenly, cracking her grande-dame composure.
Jenkins came from a time when high culture wasn’t overwhelmed by pop music. Her perfect awfulness may have been a keener joke, back before the budget cuts that humble the Toscaninis of today. I’ve heard it said that opera singers really can’t hear themselves sing. Jenkins had no excuse: she made recordings. She remains a mystery. This is an often hilarious film, but it flattens out. Despite this, and the French-made pastiche of Jenkins’ life Margaret released earlier this year, the glorious enigma of Jenkins stands, defiant, ready to be cracked by a defter movie.

Next ArticleWhat’s your favorite happy hour in Santa Cruz?