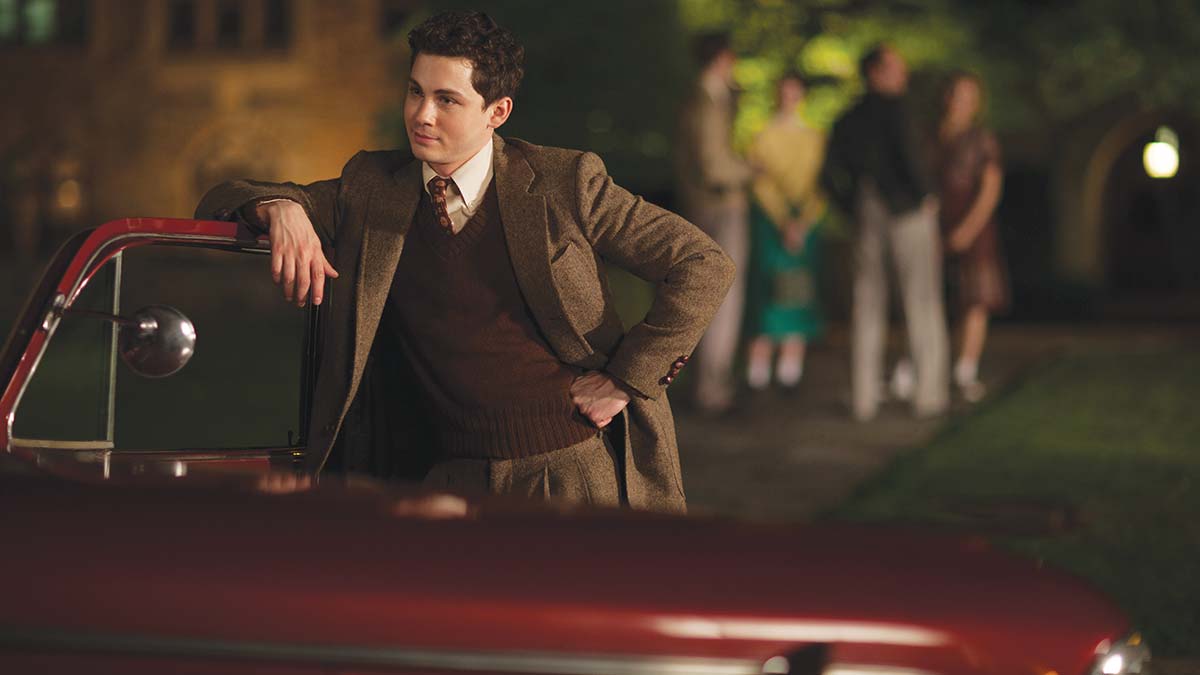 What’s a nice Jewish boy doing in a movie like this? The answer is that the often squirm-inducing Indignation is adapted from a novel by Philip Roth, in whose work nice Jewish boys are often cast far out of their comfort zones and into the wide, treacherous world. Roth published the book in 2008, but the story looks back in anguish at the bad old days of social repression and paranoia in 1951.
The movie was written and directed by James Schamus, a veteran screenwriter and producer making his feature directing debut. Schamus is absolutely meticulous in recreating the stifling miasma of conformity closing in on the young protagonist, who leaves his hometown of Newark, New Jersey, for a fearsomely staid and homogenous Midwestern college. The challenges awaiting him there are extreme—sexual, spiritual and intellectual. But there’s nothing transcendent in this familiar story, not enough of a spark that would make it worth the long slog it takes to get where it’s going.
Logan Lerman stars as Marcus Messmer. A college sophomore, straight-A student, and only child who works summers in his father’s kosher butcher shop, Marcus decides to transfer away from home to an idyllic but conservative college in Winesburg (yes, Winesburg, Ohio, American lit fans). His increasingly paranoid dad is convinced his son is hanging out with hoodlums (he’s not), and will come to no good out in the world.
Dorm life is unfortunate for Marcus: one roomie is sort of a lump, the other one keeps making goo-goo eyes at him, and the only campus fraternity that accepts Jews is hounding him to pledge, while Marcus prefers a quiet life of study. Worse, every student, regardless of faith, is required to spend at least 40 Sundays a term at morning chapel as a requirement of graduation—and, yes, roll-call is taken—which Marcus, an avowed atheist, resents.
Pretty soon, smarmy, odious, passive-aggressive Dean Caudwell (Tracy Letts) is literally breathing down his neck, demanding to know why Marcus doesn’t “fit in.” And, the wages of not fitting in are dire indeed: his college deferment is the only thing standing between Marcus and the Korean War. Letts may remind some viewers of the bygone character actor Edward Andrews, and his sense of overpowering menace fills the screen like the Blob—especially in the claustrophobic scene when he interrogates Marcus in his office.
But, like so many of the scenes setting up Marcus in opposition to college life, this one feels interminable, grinding on long past its expiration date. These airless segments are effective at first, but counter-productive as they slide into monotony. That we are made to feel so keenly how completely squelched young Marcus is by the dark forces of repressive conformity doesn’t make it any less grueling to sit through—or any more enlightening.
Meanwhile, Marcus has a close encounter with blonde patrician Olivia (Sarah Gadon), the typically beautiful-but-damaged dream girl of generations of literary male fantasies. Olivia exists in the story to confound Marcus with her sexual experience, sending him into long-winded attempts at psychoanalysis that slow things down even more. They share two or three scenes that are a little embarrassing, not because they’re too erotic (they’re not), but because they’re so stilted, in a weirdly antiseptic way. It doesn’t help that there’s so little genuine feeling generated between the actors or their characters in these supposedly key moments.
This is the final, fatal problem with the movie (beyond the consistently flat dialogue and protracted dramatic set-ups). Despite occasional (brief) flashes of resistance, when a personality threatens to surface, Marcus is so passive, he’s practically inert. Things happen to him, followed by long, navel-gazing monologues or voice-overs about the moral implications. But we never connect to him as an individual to care about; he’s a stick figure created to bear the brunt of all the angst directed at the outsider in an unforgiving social order.
And without that investment in the character, the movie never rises above the level of mere indignity, instead of the tragedy it tries to convey.

Previous ArticleNew Owners for the Buttery