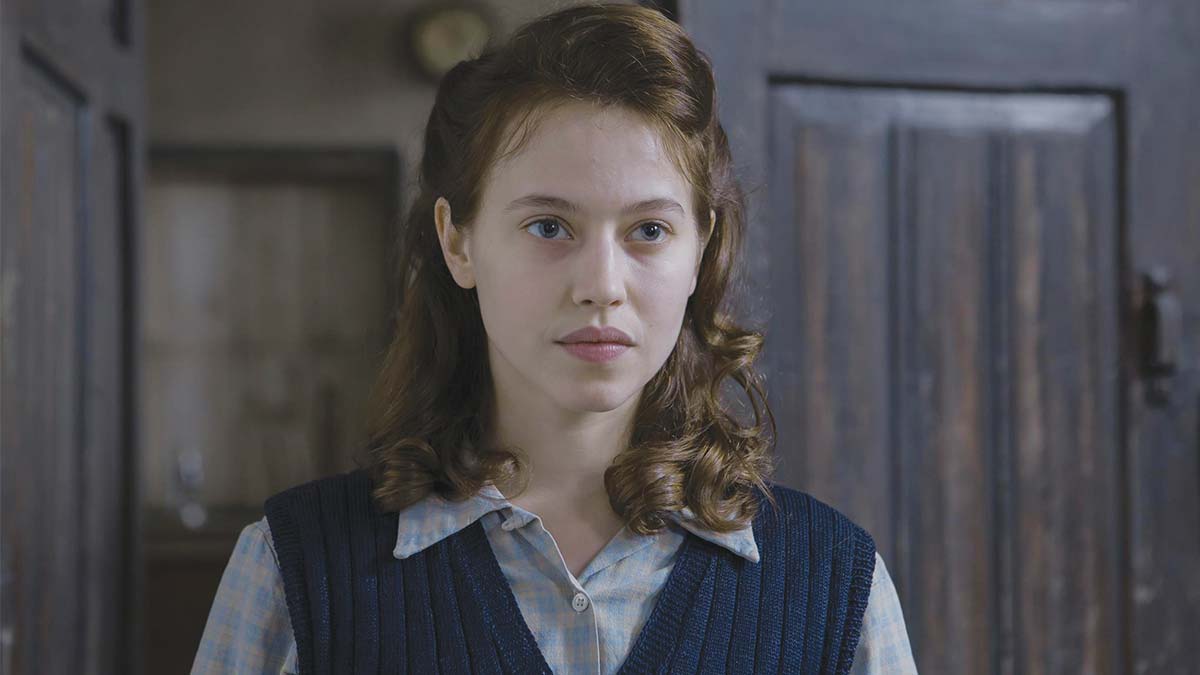 The horrors of warfare respect no sanctuary. However isolated you may think you are, physically or emotionally, the evil will find you. It’s how one copes with the results—or fails to cope—and the moral sacrifices made along the way that provides the foundation for the French drama The Innocents. In this slowly unfolding morality play, already thorny issues of personal moral choices get all tangled up with questions of faith and obedience at a remote Catholic convent in postwar Poland.
The film was directed by French filmmaker Anne Fontaine (Coco Before Chanel). She is also one of five people credited with working on the script, from a story idea by Philippe Maynial, based on the experiences of a real-life French woman doctor in Europe after World War II. The film’s protagonist is Mathilde Beaulieu (Lou de Laâge), a young intern working at a French Red Cross hospital in rural Poland in 1945; their mission is to find and repatriate French-born victims of the death camps.
In the depth of winter, a young nun arrives at the post, asking for a doctor. She’s turned away by the busy staff, but when Mathilde notices her outside hours later, kneeling in the snow, praying, the doctor goes out to see what the matter is. The nun, Maria (Agate Buzek) has come on foot from a far-off convent on the edge of the forest, and Mathilde agrees to drive her back in a jeep to see if she can help.
Although the suspicious Abbess (Agata Kulesza) clearly doesn’t want her there, Mathilde is reluctantly allowed to see a young nun who’s writhing in agony—she’s about to give birth, and the baby is breeched. Mathilde safely delivers the infant, but soon discovers that seven more of the convent’s cloistered nuns and novices are also pregnant. At the end of the war, the Abbess reveals, bitterly, the sisters were persecuted by the Germans, then “occupied” by the Russian army. The resulting pregnancies are a “shame” the Abbess will do anything to keep hidden.
Mathilde agrees to come after hours and between shifts at the hospital to help the girls through their pregnancies. But, she’s told, it’s “a sin” for nuns to show their bodies or be touched, so they’re afraid to be examined for fear of going to Hell. While Mathilde struggles to reconcile religious beliefs and medical science, Maria has a crisis of faith about a God who would allow such violence to befall the blameless Sisters. (When Maria confesses her doubts, the Abbess’s solution is to pray.)
This conflict between piety, morality, and common sense threads through the story, rendering it both infuriating and tragic, by turns—especially as it affects those newborn babies. Director Fontaine maintains a delicate balance between the serenity of the convent and the Sisters’ beautiful plainsongs, and the brutal aftermath of the war outside—and what’s happening to their bodies from within.
One small problem is that, beyond doubting Maria and the Abbess, it’s hard to tell the young nuns apart, since, well, they’re all dressed like nuns in their identical habits and hair-concealing wimples. It’s not easy to identify them from their faces alone, and we lose some of the continuity of the drama because we can’t always connect individual nuns to the subplots that concern them.
But the acting is very persuasive, especially de Laâge as forthright, compassionate Mathilde, who has every reason to bond with the Sisters as the story progresses. Vincent Macaigne lends a briskly cynical yet sympathetic male voice as the French-Jewish doctor who’s Mathilde’s boss (and occasional bedmate). Buzek is excellent as Maria, who chooses action over obedience to do the right thing.
Agate Kulesza brings dark layers to the Abbess, who’s desperate to remedy her complex situation with simple but devastating choices. It’s an interesting about-face for Kulesza, who was so terrific as the cynical, wayward aunt in the fine Polish drama, Ida, a couple of years back.

THE INNOCENTS
*** (out of four)
With Lou de de Laâge, Agata Buzek, and Agata Kulesza. Written by  Pascal Bonitzer, Anne Fontaine, Sabrina B. Karine and Alice Vial, from a story by Philippe Maynial. Directed by Anne Fontaine. A Music Box release. (PG-13) 115 minutes.