.Film Review: ‘Lucy In The Sky’ 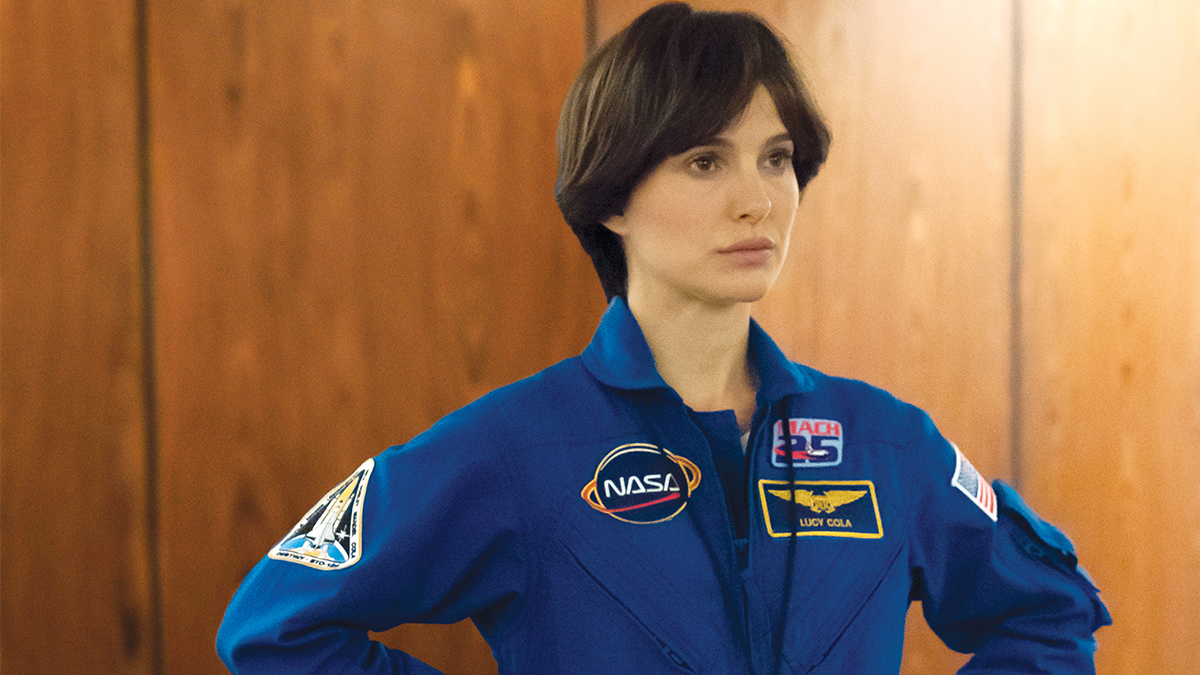 Walking in space is a lot like having sex with Jon Hamm. At least, that’s the takeaway from filmmaker Noah Hawley’s Lucy In the Sky, in which an astronaut played by Natalie Portman is so awed by her brief walk among the stars, her real life no longer measures up. Back on Earth, mostly in the arms of a fellow astronaut played by Hamm, she’s in a frenzy to replicate the same “feel”—a few minutes of euphoria, followed by a desperate craving to go back and do it again, even though she’s never quite satisfied.

Hawley would have you believe there’s more to the movie than that, an element of attempted profundity as Lucy keeps detaching from the minutiae of everyday life to soar again into the vastness of space that consumes her mind. Everything back on Earth now seems “so small.” Many aerial shots, often beautifully composed, scan whole neighborhoods from high above, or look down from balconies or through stairwells, and there are lots of arty shots where the image is stretched to letterbox proportions or otherwise manipulated to add to the sense of disorientation.

But these are all visual tricks and window-dressing. When it comes down to the heart of the matter—story, characters, plot, theme—this movie fails to launch. Despite its lofty, quasi-spiritual ambitions, the movie can’t escape the gravitational pull of its own mundane, disappointing plotting and chaotic execution to get into orbit.

Astronaut Lucy Cola (Portman) returns from her ecstatic space walk to her suburban home in Houston, and her genial nice-guy husband, Drew (an unrecognizable Dan Stevens), a NASA tech. But she doesn’t feel like she fits into her old life any more. All she cares about is getting back up into space, so instead of taking a break, she dives into the grueling training program for the next mission.

She feels a sense of kinship when fellow space-traveler Mark Goodwin (Hamm) invites her out bowling with the “Circle Club”—himself and two other astronauts who have walked in space. Pretty soon, she’s attempting manned space flight in the back of Mark’s pick-up truck, and sneaking around behind her husband’s back. Further complicating things is Lucy’s salty grandma Nana (Ellen Burstyn), an alcoholic who chain-smokes around her oxygen tube and swears like a stevedore, but has little other function than to provide Burstyn with the movie’s juiciest role.

It’s all loosely based on the story of real-life astronaut Lisa Nowack, whose notorious cross-country pursuit of a “romantic rival” made headlines. (“Inspired by real events,” it says on screen.) But as crazy as Nowack’s story was, Hawley’s invented flourishes are even more peculiar in the movie’s dizzy last half-hour, as Lucy drives off on her half-baked mission. Her sense of urgency is fierce, but her intent unclear. She also hauls along her bewildered teenage niece (Pearl Amanda Dixon); Hawley apparently hopes the teen-in-jeopardy element will ramp up the tension in a sequence so nonsensical, we can’t invest in it any other way.

The movie is riddled with details that may seem significant at first, but add up to nothing. The old screenwriter’s adage that a loaded weapon introduced into the plot means it has to get fired goes out the window here, when a handgun keeps causing alarm but is never explained or used. When something goes wrong during a training exercise and Lucy goes without oxygen for two minutes—with a beatific smile on her face—that’s not explained either. (Has she become bionic?) Nor does this miracle ever figure into the plot again.

And what on Earth (or off) does the eponymous Beatles song have to do with any of it, popping up on the soundtrack in a slightly tortured rendition by Lisa Hannigan toward the end of the movie? Hawley sends out feelers in many directions but can’t find a narrative thrust that can keep us engaged.

LUCY IN THE SKY