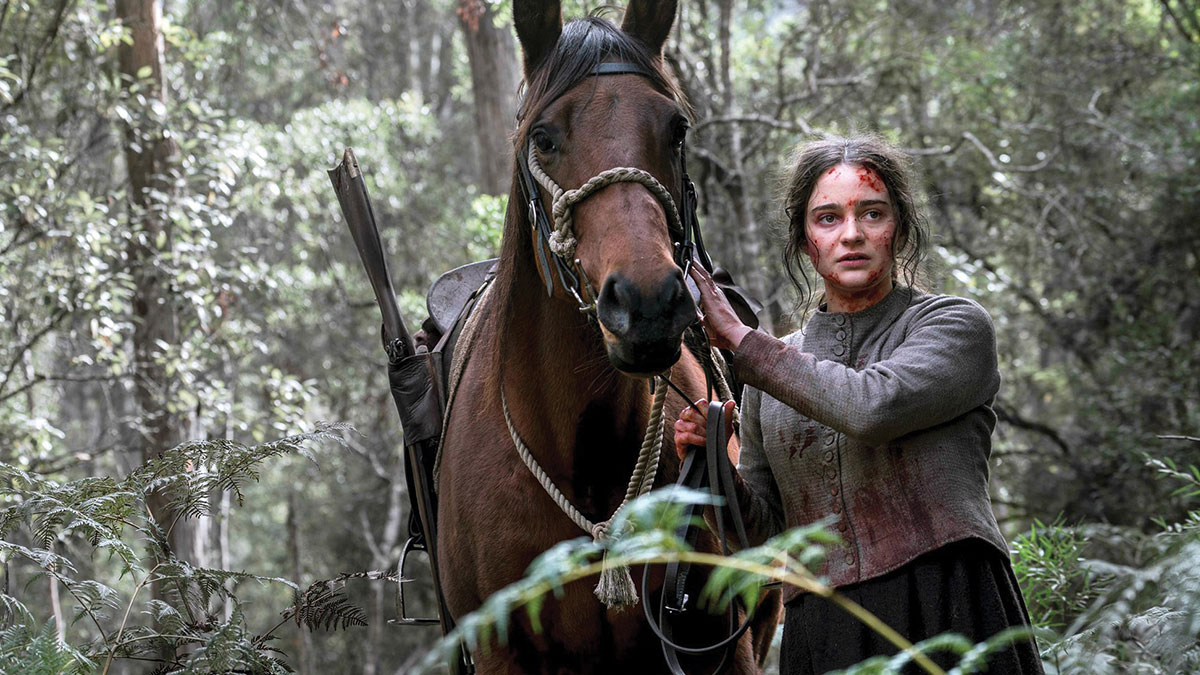 When watching a rape-revenge film, which The Nightingale often pretends it isn’t, one hopes for something with enough aesthetic sensibility to conquer the basic manipulativeness of the premise.

The problem with so many of these films is their insistence on graphic depictions of sexual violence—as if viewers couldn’t possibly imagine being overpowered and taken by force.

The sickening fact is that far too many viewers know exactly how it feels, even without—as here—the multiple shots of our heroine, Claire (Game of Thrones’ Aisling Fraciosi), experiencing an assault.

We’re also supposed believe it’s news that rape would dehumanize us to the point where we’d want bestial revenge. The first prong of this fork underestimates our sensitivity, the second prong overestimates our genteelness. It’s surprising how little rape one needs to be ready for revenge. If a movie heroine wants to barbecue a rapist’s balls, I’ll hand her a match and a bottle of KC Sauce.

It’s 1825 in Van Diemen’s Land, today’s Tasmania, during the closing of a war of extermination against the local aborigines. This genocide, as Robert Hughes writes in The Fatal Shore, ended with the last native stuffed and mounted in a vitrine. The 20-ish Claire is an Irish criminal sent to the penal colony for some unspecified misdeed. She lacks the “ticket”—the papers that’ll enable her to leave the area, and the sardonic military officer Hawkins (Sam Clafin) who still owns her, despite her marriage to the man she loves, Aidan (Michael Shaesby).

Hawkins slaps her and throws her across a table; later, she’s subjected to a cabin invasion in which she loses everything. The assaulters are traditional grindhouse thugs: Hawkins the brute leader, Ruse (Damon Herriman) the slavering follower, and one scaredy-cat (Harry Weaving, Hugo’s son) who snivels in terror. After he leaves her for dead, Hawkins seeks to cross the unpacified island overland, to get to a northern garrison town. He hopes to outrun the bad news that might cost him a promotion. He hauls his vile soldiers with him, as well as an elderly native guide and a small parcel of yokels in shapeless hats.

Claire gets her husband’s rifle and his pony and tracks her rapists. The Nightingale might have increased its appeal by going full True Grit, cutting the assault time and amping the frontier menace. Like Rooster Cogburn, the aborigine guide Billy (Baykali Ganambarr) is discovered nursing a bottle, refusing to help until he’s bribed. Like Mattie Ross, Claire shows her mettle by challenging a raging river on horseback, and like Mattie, Claire misfires her gun right when she has her quarry in her crosshairs. Kent insists on real-life consequences to this horror—that Claire’s thirst for vengeance is shallower than she thinks, and she sickens from the taste.

A plus in The Nightingale is the terrain. Shadows of lone dead trees stand against the gloaming. Claire’s dreams of the crying of a baby fade into the nocturnal shrieks of the Tasmanian devils. The juicy chortle of the currawongs mirror the loneliness of the forest. Kent chose to shoot in Academy ratio, which means aggressors can steal in from the side of the frame unnoticed, just as the pursued can jump out fast into the underbrush. During Claire’s first ordeal, there’s no room to escape. She dominates the screen in wrath or in sobbing anguish, her pale face laced with a victim’s blood.

First-time actor Ganambarr has a voice with little inflection, and there’s some bits of acting that aren’t in his range. In a mourning scene, Kent first hides his face, then goes long and wide, so his wail of grief fills the skies. The man has a gift for comedy.  Ganambarr is warm and likable, with a kind of cool stoner’s self possession. There are a few incidents of mordant humor—a farmer blasts at Billy as he tries to steal a bag of flour from his hovel; the slug hits the bag and gives Billy a slapstick dusting right in the face.

As with an indifferent Western, something just keeps you watching this, no matter what—even in the wandering last hour, when Billy and Claire are separated and later rescued by Quaker types. The title is fraught. On one level, The Nightingale takes its name from Claire’s sweet singing of a capella Irish ballads. Likely it’s also meant to echo the legend of Philomela, the raped woman transformed into a nightingale (fussy scholars insists it was actually a swallow).

In Metamorphises, Ovid retold the primordial rape-revenge story, bridging the eons between Sophocles’ lost Tereus and Shakespeare’s ghastly Titus Andronicus. In Horace Gregory’s translation, Philomela’s outraged sister considers various methods of payback: “Cut off the genitals that injured you.” How ancient, the elements of this peculiarly basic form of entertainment.

Previous ArticleBe Our Guest—Pivot: The Art of Fashion