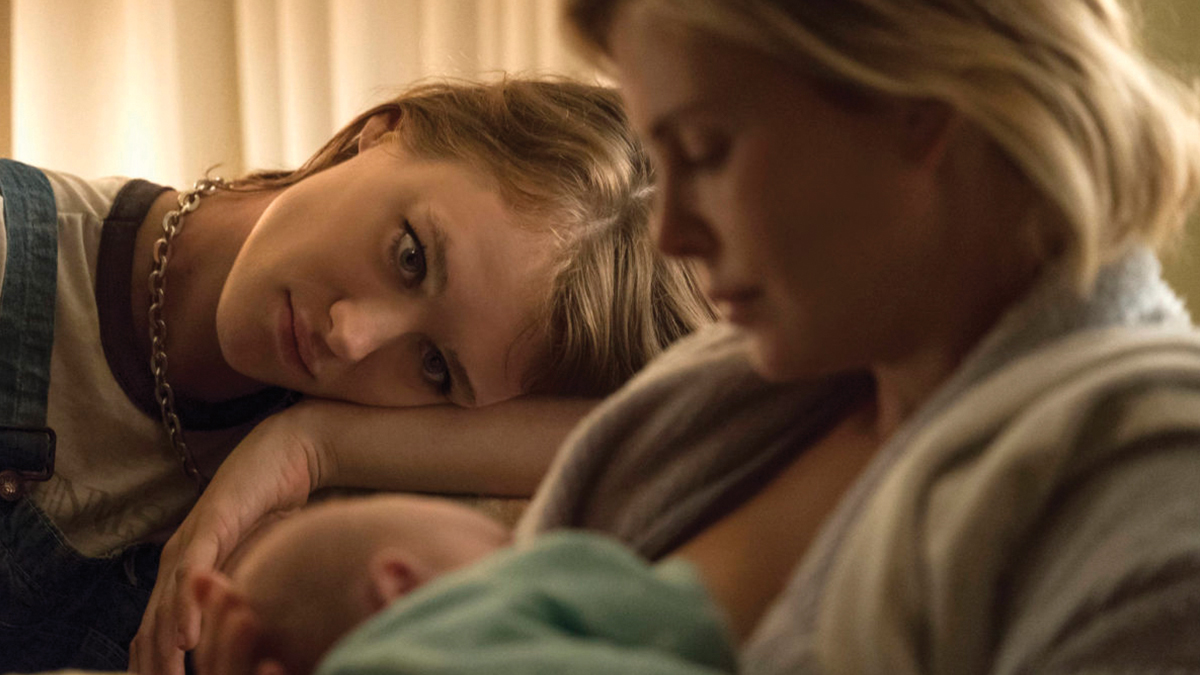 They called Juno whip-smart, and some of us still have the lash scars. Tully, by writer Diablo Cody and director Jason Reitman, has everything left out of their first film together that made it the crowd-pleaser it was. Cody tends to write characters that are what the science-fiction fans call “a Mary Sue”—meaning an awesomely idealized version of the writer, so brilliant that the other characters sort of gaze in amazement at her.

Tully has some of the narcissism seen in Juno and their follow-up, Young Adult, but there’s also some unusually raw material, acted by Charlize Theron with barely smothered fury.

Marlo (Theron) has a young son who is vaguely on the autism spectrum, and an older daughter who is in an awkward stage. Mom is vastly pregnant—like someone in a previously unseen fourth trimester. Her husband, Drew (Ron Livingston, looking like Despair on a monument), has a high-tech job he can’t begin to explain to listeners. When not plugged into shooter games on his console, he travels for work frequently, leaving Marlo alone on the mommy track.

Marlo’s very well-off brother Craig (Mark Duplass) offers a suggestion: he’ll hire Marlo a “night nanny” who comes in during the first difficult months after birth, to tend the baby and bring it in for midnight feedings.

We hear dialogue about how Marlo doesn’t want to be indebted to the insufferably rich Craig, but the delay is mostly there so we won’t think Marlo is spoiled. The nanny finally arrives: Tully (Mackenzie Davis of Halt and Catch Fire) is as manic and as pixieish a dream girl as ever seen—too-bright smile, gleaming eyes, a wardrobe of oversized denim that looks like an OshKosh B’gosh jumper on a toddler. Not only is she a perfect servant but she’s also a marvelous confidante, helping to pull Marlo out of the pit of postpartum numbness and despair. “Why are you so much wiser when I’m so much older?” Marlo wonders.

Tully is spookily chipper, but we’re warned off from the thought that it’s time for the usual servant-trouble melodrama, in which the nanny takes both husband and baby. But Tully is indeed too good to be true. And the band Beulah Belle’s open-chord guitar cover of the theme from You Only Live Twice is a clue to what’s really going on.

Tully’s well-articulated anguish over a mother’s loss of self while tending a newborn is very unusual. In the feminist days of rage, it would have been society who forced the woman into the role of brood sow and slop cleaner. In this aftermath of an unplanned pregnancy, Marlo did this to herself—she has no one to blame—and here is everything savage about new motherhood that was skated over in Juno. The montage of breast pumping and diaper changing is so brutal you feel like calling mom in the middle of the movie and thanking her.

It’s during an escape to Brooklyn that Tully gets its payoff, as Tully and Marlo have a few drinks and revisit the places she spent her youth. Some will definitely call the reveal a cheat, and they’d be right. It’s a hard film to justify in the parking lot afterward.

If a movie was made by its lines alone, this is Cody’s best writing. The insufferably rich sister-in-law ordering her computer, “Siri, play hip-hop.” Or Marlo’s riposte when a school administrator describes her child as “quirky”—“Do I have a kid or a ukulele?” But there’s also Cody’s typical shiny wordplay, the kind that makes your hair hurt: “I’m like Saudi Arabia, I have an energy surplus,” Tully says sweetly. Her bedazzlement with the role of handmaid seems straight out of Gilead … or, in lighter moments, the Portlandia version of Mary Poppins.

Except for the NYC sequence, Tully was shot in Vancouver, posing as Long Island or something. Marlo’s house is that dull earth-tone brown exclusively seen in dowdy Pacific Northwest fixer-uppers. Reitman’s sense of terroir isn’t strong—visually, Young Adult couldn’t decide if it was set in a smelly Bumpkinville or a quirky, hipster small town. Ultimately, there’s too much sting in Tully to dismiss, and Theron’s fierceness nails this down. The movie is so fervent, it’s a kind of apology for the callowness of Juno.

Previous Article5 Things to Do in Santa Cruz May 9-15