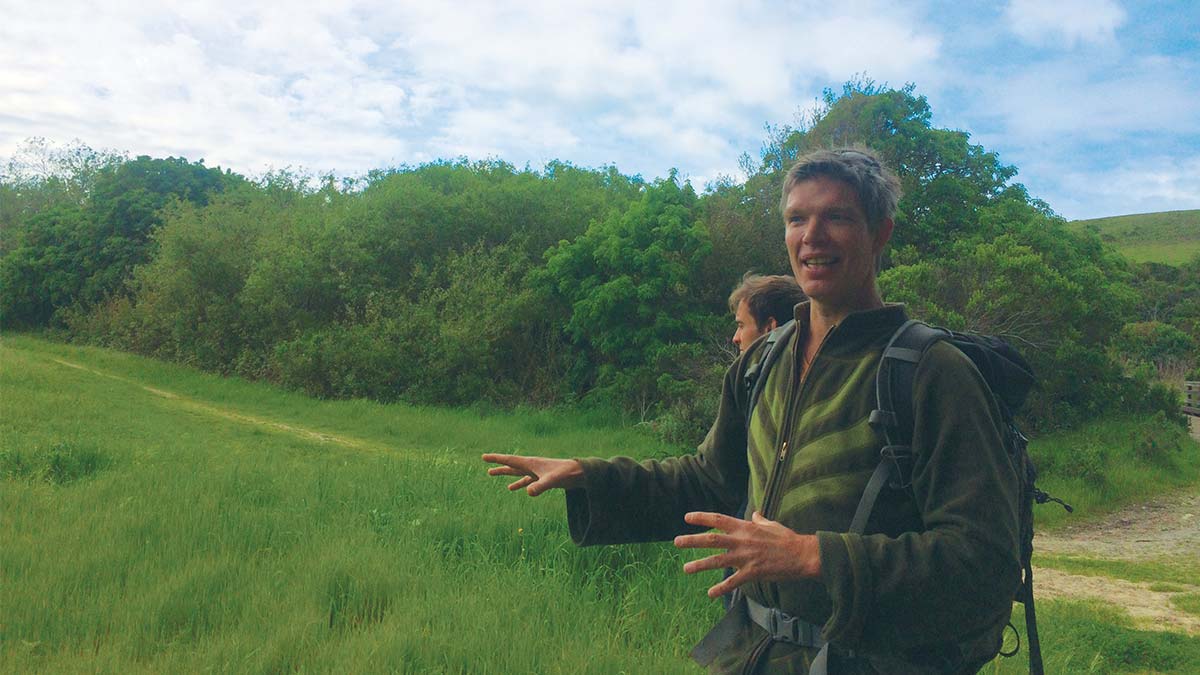 Fifteen minutes into a hike led by licensed acupuncturist Glenn Kazmierski, our group has already made its second stop, a break to chew on some yarrow leaves, a shrub that sprouted to life surprisingly early this year near a bridge at Wilder Ranch State Park. Its minty, bitter taste lingers in our mouths as Kazmierski explains, with a grin, that he plans to take us into an open field for exercise. Along the way, we’ll snack on plants like miner’s lettuce and sour grass. We’ll drink two kinds of hot tea, including a brew made from a stinging nettle plant that we’ll harvest ourselves.
“I want to make friends with the plants, so that we can say, ‘Hello, yarrow. Hello, nettle!’” Kazmierski says, waving his arms, one by one, in a circular motion. “‘I know you. Do you know me?’”
Soon, we come to a running creek. As we take off our shoes to cross, Kazmierski pauses to shine a light on this moment as an opportunity to let go of all worries.
“This is what I call an experiential gateway crossing from the everyday world to the more-than-human world, where we can be more in touch with reality,” he says, standing beside the stream. “It’s a message to my psyche that I’ve left the world of normal cares and reestablished a connection with the world in a way that restores my sense of well-being.”
In traditional Chinese medicine, which Kazmierski practices, the spring is a season that activates the qi, or energy, in the liver. If that liver energy stagnates, it can create other health problems all over the body. A brisk walk with swinging arms can stimulate healthy lungs, which support a better liver. Sour or green foods like the ones he has us enjoying are supposed to cleanse the blood and clear the liver.
“Nature’s pharmacy is amazing, and all we need to know is a few plants, and we can get along in a way we couldn’t before,” says Kazmierski, who—in the interest of full disclosure—happens to be my acupuncturist.
Kazmierski used to enjoy checking in with nature for days at a time, going on little retreats by himself. But after starting his private practice, he began finding it harder to get away. He began going on shorter trips, just a few hours at a time. At that point, he figured it was time to start bringing other people in, so they could connect with the natural world, too, and learn a new sense of how to live a healthy existence.
“Without this kind of sense, we just keep doing the same things over and over again. It’s my opinion that it’s really important to disconnect,” Kazmierski says. “And where are you going to disconnect to—the TV? Why not disconnect and reconnect to something that’s alive and real and brings aliveness back to one’s being? I want to generate a sense of empowerment through self-cultivation in nature as a way of restoring one’s health and sanity. And also, by connecting to nature, we’ll have more of a sensitivity to life and other people.”
Kazmierski wants to start leading nature walks like this each season, four times a year, including tea hikes like this one in the spring and fall, each for about $70 per person. A portion will be donated to a local outdoor program educating youth. He has a vision of people all over the county getting outside and experiencing nature together.
On a grassy hill overlooking the ocean, Kazmierski leads us all in some qi gong and stretches to activate the lung channel and further heal the liver.
“We may feel silly moving our limbs out in the open, but we’ll all be doing it,” Kazmierski says, as he warms up, his limbs flailing around. “And also, it’s OK to be weird!”

For more information on Kazmierski, visit glennkazmierskilac.com or call 459-6005.