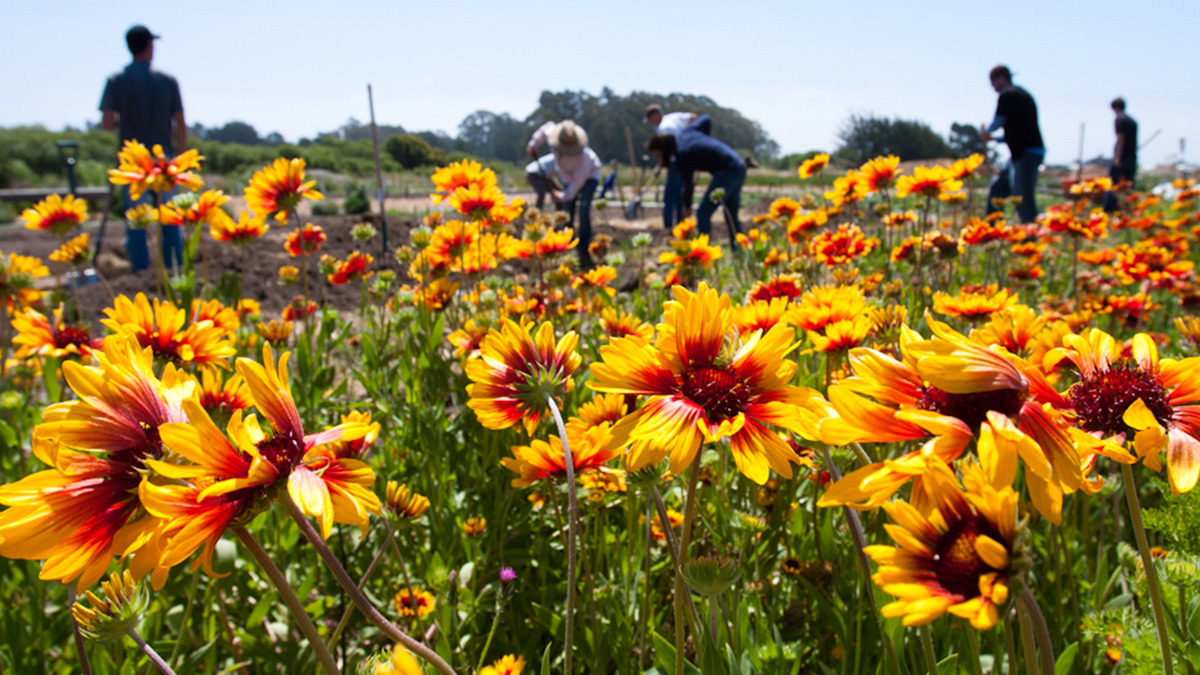 Adam Marshall remembers fondly the time he spent as a kid on his grandfather’s ranch in Watsonville.

That’s where he learned how much he enjoyed labor-intensive work. He dreamed of carrying on his grandfather’s commitment to helping others in need without an expectation of anything in return—as Marshall recently explained to a riveted audience at DNA’s Comedy Lab.

Earlier this year, Marshall had been out of jail for two months and was living out of his car when he realized that he could use some help putting his life back together. He discovered the Homeless Garden Project, where he joined a group of fellow trainees building skills and growing their support networks while transitioning out of homelessness.

Marshall was sharing his story at a celebration of the Homeless Garden Project and its impact on the lives of trainees like Marshall.

“The farm has changed my life in so many ways,” Marshall told the audience. “It has given me hope. It has given me a willingness to live and to better myself. If there is a cure for homelessness, it is through community outreach programs like the Homeless Garden Project.”

Now, the Homeless Garden Project is working on more than doubling its size. Once it expands, the nonprofit will be able to help even more people like Marshall who are experiencing homelessness. The group, founded in 1990, has achieved remarkable results with its current 3.5-acre farm near Natural Bridges State Beach. In 2018, 100% of the group’s trainee graduates obtained stable employment and housing. The farm generated 30,000 pounds of organic produce, including about 7,000 pounds that were donated to community members, providing ingredients for some 40 products sold at the group’s shops in downtown Santa Cruz and Capitola.

The Homeless Garden Project is participating in this year’s Santa Cruz Gives campaign. And the project is raising money for a long-planned move to a 9-acre site in Pogonip. The move has been in the works for more than 20 years, with the acreage originally allocated in the city’s 1998 master plan. The group wanted to make sure it was effective and well-run and then think about expanding, says Darrie Ganzhorn, executive director of the Homeless Garden Project.

It will be the first time the nonprofit can make a long-term farm plan and add an orchard. Site plans also include a greenhouse and barn, and will bring electricity, internet and bathrooms instead of portable toilets. The new farm would allow the group to work with up to 50 trainees at a time, too, and for more community visits.

“We want to see the project be a destination for people to come see a model for how a community can both really promote sustainable agriculture and also solutions to homelessness,” Ganzhorn says.

But progress hit an unexpected hurdle this year, when the group found remnants of clay pigeons in the dirt of the Pogonip site. Newspaper articles from the 1930s seem to confirm that the site formerly hosted skeet shooting, and the clay pigeons used for the activity apparently contained lead and other contaminants that are now in the soil.

While the levels are not unsafe for activities like hiking in the park, based on initial soil studies, they could be unsafe for farming, says Tony Elliot, director of Parks and Recreation for the city of Santa Cruz. “It was a surprise to all of us, so we wanted to work expeditiously with them to figure out what’s going on and resolve it as quickly as possible,” Elliot says.

A grant from the state covered most of the cost of additional assessment and evaluation of the soil, the results of which are expected by May. At that point, the city and the HGP team hope to understand the scope of the contamination and what remediation is needed. It’s not clear at this time how much the remediation might cost.

In the meantime, Elliot says, the city is working closely with the Homeless Garden Project to figure out what steps they can take toward completing the move, such as obtaining tree permits and putting in a water line to the property.

The group currently plans to prepare the soil and take other basic steps starting in May, then farm at the Pogonip site starting in the 2021 growing season, Ganzhorn says.

“It’s just such a long-held dream for the project and for our community,” she says. “It’s a complicated project, and it’s worth it. It stands to have so much community impact.”

For Marshall, being a trainee at the farm gave him a drive and determination he didn’t know he had before, he told the audience at the HGP event. His speech was met with a standing ovation from everyone in the theater.

“The Homeless Garden Project is my home … It’s a magical place,” he said. “It saved my life.”

Visit santacruzgives.org to donate to HGP or any of this year’s participating nonprofits.

Previous ArticleNuz: Why We Can’t Have Nice Things, Library Edition