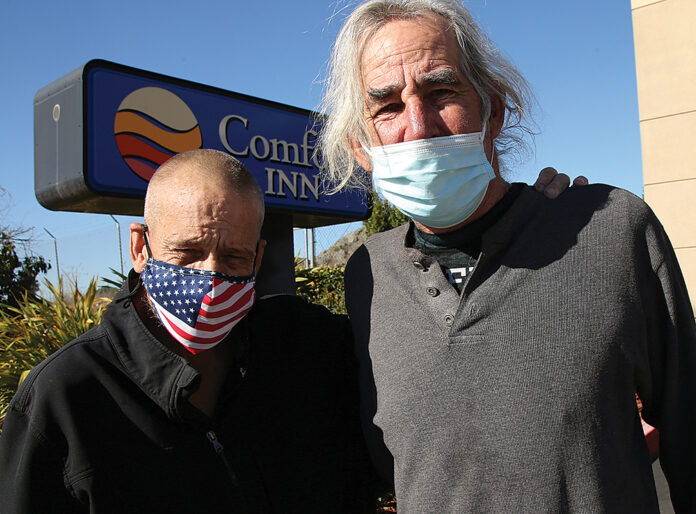 WATSONVILLE—David Schartow was a retired ironworker living in Paradise with his young daughter when the 2018 Camp Fire destroyed the entire town, including his home.

Now homeless, Schartow, 64, has since bounced through several temporary shelters, including his current accommodations, the Comfort Inn in Watsonville. That hotel is part of Project Roomkey, a statewide program designed to get senior and medically vulnerable people off the streets and safe from Covid-19.

Schartow is among roughly 20 residents remaining in the hotel as county officials look to find alternative shelter for them. All have been handed eviction notices and must be out by the end of October, he says.

A caseworker recently gave him another three-week stay at another hotel, but he says that merely delays the inevitable. The caseworker has also suggested putting him in a skilled nursing facility, an option he said would mean he couldn’t live with his daughter, now 15.

While most of his fellow residents have been placed, Schartow says his medical problems—he is legally blind and relies on a wheelchair to get around—has made it difficult to find a place that can accommodate him.

His worst-case scenario, he says, is packing a backpack and a tent.

“I know they’re going to throw me out, and when they do, I’ll just wheel myself down to that creek,” he said, pointing down Airport Boulevard. “If they haven’t found something in three months, they won’t find it in three weeks.”

Santa Cruz County spokesman Jason Hoppin says the county, which administers Project Roomkey through the state, provides a caseworker for every resident who works to find shelter for them. The program also housed people who were displaced by the CZU Lightning Complex fires.

“Our preferred option is to find everyone an affordable, permanent home,” he said. “But our teams will continue working with people toward that goal, even if something is not immediately available at the time of closure.”

The problem, Hoppin says, is not the funding, but the tight housing market that affects everyone who is looking for a place to live, with as many as three dozen people for every available spot.

“There’s so much competition for every space that it’s hard to locate people,” he said.

Hoppin says that residents are being offered spaces in other hotels, and in emergency shelters.

The county has closed Watsonville Veterans Hall and Santa Cruz Veterans Memorial Building, both of which were housing people experiencing homelessness, as well as the shelter for transition-age youth at Cabrillo College.

Also closed is the shelter at Delaveaga Park, and two hotels in Santa Cruz. One other hotel is still operating in Watsonville.

“We’ve successfully moved probably a couple hundred people out of those closed shelters into other accommodations,” Hoppin said.

Hoppin says some have opted to live on the street over what the county has to offer.

Allen Schlumbrecht, 47, says he has previously stayed at the Stag Hotel in Watsonville and at the Brookdale Lodge in the Santa Cruz Mountains.

“I’ve sent messages to the chief of police in Watsonville and to [Congressman Jimmy] Panetta,” the former house painter said. “And I’ve not heard back from anyone about what we’re supposed to do. We have to be out of here by 5 o’clock on Friday; I don’t know what’s next.”

Terry Murphy, 67, says he’s been housed at the Comfort Inn for two years. Born in Watsonville, Murphy, a former union carpenter and Watsonville High School graduate (class of 1973), said county officials have lined up an apartment for him in Watsonville. Murphy, who suffers from several medical maladies, says the space will be a welcome relief.

“I’m really looking forward to this,” he said. “I’m supposed to get the key today … I worked hard for a lot of years, and this is where I end up.”

Housing Matters CEO Phil Kramer says that the availability of housing is coupled with the difficulty of finding landlords willing to accept vouchers, when any open apartment can have dozens of hopeful tenants, many of whom are not homeless and have the means to pay their rent in cash. There is no housing specifically set aside for people in programs such as Roomkey, he adds.

“It’s all that coming together, which has been a long-term reality and challenge in getting folks housed in this market,” he said.

He added: “We’re moving as quickly as we can with our permanent supportive housing project.”

Housing matters recently surpassed its $8 million fundraising goal to raise $9.3 million, which will be used to build 120 studio apartments for medically vulnerable and chronically homeless people, with supportive care on-site.

The project has gained approval from the Santa Cruz Planning Department, and Kramer says construction could begin early next year.

Homeless advocates are hopeful that Project Homekey, a $1.4 billion state-run program that helps local jurisdictions find long-term housing solutions for homeless people, will solve some of these issues.