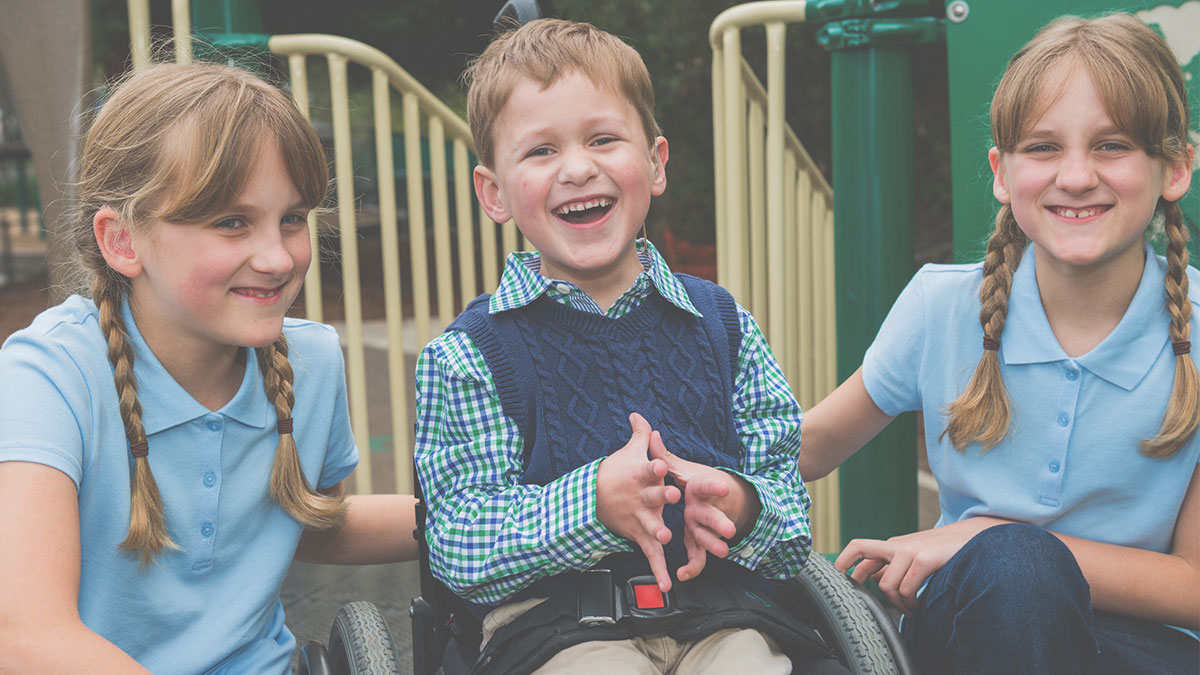 Tricia Potts, a mother of three, knows how difficult it can be for children with physical disabilities to fit in at parks.

Oliver, her 6-year-old son, uses a wheelchair and has trouble navigating most playgrounds because they don’t offer many paths through and around them. Most jungle gyms have few options for anyone with limited mobility.

“The whole point of being able to play together is to build those bonds of friendships and reduce bias,” says Potts, who as founder of the nonprofit Santa Cruz Playground Project is working to design the first totally inclusive playground in the county. “Children learn to see each other as valued individuals through the vehicle of play.”

Playgrounds are built to comply with the Americans with Disabilities Act, but Potts says most only meet the minimum standards. Rubberized surfaces that her son uses to roll around on are often limited to one piece of equipment, and his wheelchair cannot roll through wood chips.

Shane’s Inspiration, a nonprofit based in Los Angeles, has been working with the Playground Project to create LEO’s Haven, a jungle gym that will be at Chanticleer Park in Live Oak. It takes its moniker from the first initials of Potts’ three children: Lauren, Evelyn, and Oliver. The design features two play areas, for both big and little kids. It features multiple ramps, a cushioned ground surface and a Wee-Saw—like a seesaw, but designed for kids of all abilities.

The Playground Project is just one among a handful of groups featured in this year’s Santa Cruz Gives holiday fundraising drive, which runs through Saturday, Dec. 31. Readers can contribute to these local nonprofits at santacruzgives.org. Potts’ group is one of a dozen organizations selected to be part of Santa Cruz Gives that is focused specifically on county youth.

“There are so many great youth organizations out there, and there’s so many people in this community working so hard to do good,” says Potts. “It’s humbling to be a part of this group now, and it really takes everyone to be chipping in and it makes life easier when it happens.”

Breaking down barriers on children’s playgrounds is just one of many youth issues that Santa Cruz Gives’ featured organizations are tackling.

Some groups are relatively new, like Youth N.O.W., which started in 2010 to provide after-school tutoring to South County students, as well as a safe place with positive mentors. Other more storied organizations already have a long history here. In 2017, Court Appointed Special Advocates for Children of Santa Cruz County (CASA) celebrates its 25th anniversary of assisting children in foster care who lack a constant adult figure in their life.

“There are a lot of nonprofit organizations in this county,” said Mary Kashmar, development director for CASA. “There are a good number of them that are doing real quality work.”

Santa Cruz County has 450 children in foster care, 300 of which need an advocate. More than speaking up for the child in court, CASA advocates serve as mentors and parental figures for their appointed children. Advocates could lend money to children who need to buy a dress for prom or nudge them into a special program that would encourage growth.

Each organization participating in Santa Cruz Gives this year has a “big idea” project in need of funds. CASA’s project is its Birth to 5 program, focusing on children in their early years, when stressors from the court system or a turbulent home could leave a major impact on someone’s identity for decades to come.

Kashmar, who also volunteers as an advocate, says the children in the courts experience emotional trauma that could otherwise start them down a frightening path. She recalls one boy who never had a male figure to look up to. “He tells me he had a lot of men in his life, but all those men have hurt him,” she says. “His CASA advocate was his first [positive male role model].”

Kashmar credits that influence with stopping many children from joining gangs and living on the streets.

Positive influence is also what makes Youth N.O.W.’s tutoring program so powerful. In the heart of Watsonville, the program gives middle and high school students a place to focus after school each day. The program’s latest push is providing one-on-one guidance to high school students, helping them to find their paths to college or a career.

Development and Marketing Director Jenna Rodriguez says the organization is a social and academic hub for underserved youth.

“In the community of Watsonville and Santa Cruz County, many youths have family members who are working all the time or who haven’t gone to college or who don’t know the steps,” Rodriguez says. “With schools being overpopulated and teachers being overworked, we see ourselves in a vital role to make their dreams come true.”

Among youth organizations, one term that comes up a lot is the word “risk”—along with ideas about how to manage or reduce it. Getting involved with at-risk youth, after all, can prevent drug use, crime, and being mixed up in any other number of bad influences down the road. That’s why Theresa Marie Cariño started Salud y Cariño, which means “health and love” in Spanish.

When Cariño was 2 years old, she suffered burns all over her body, leaving her with major scars. Although she survived, the scarring resulted in bullying that led to low self-esteem and questionable decision making, she says. She became a teen mom, and later watched her life transform when she found strong female role models and started knowing the feeling of having others believe in her.

It’s a lesson she’s taken to young girls by starting her nonprofit, which works with girls in the Live Oak area and uses physical activity to motivate them.

“Especially now, given the times and going into 2017,” Cariño says, “girls really do need to be able to speak for themselves.”

The organization started out by helping 17 girls in 2013, and three years later boasts 150 enrollees, with more growth planned in the near future, Cariño says. Salud y Cariño runs yearlong programs for girls in the sixth, seventh and eighth grades and 10-week programs for fifth graders.

Other youth-focused organizations participating in Santa Cruz Gives include UnChained, which is working to pair kids with dogs; NAMI Santa Cruz County, which works with children and adults who deal with mental health issues; Jacob’s Heart, which fights pediatric cancer and supports families facing it; Big Brothers Big Sisters, which establishes mentor relationships; Volunteer Center of Santa Cruz County, which is growing its Reading Buddies program; Farm Discovery at Live Earth, which teaches kids healthy gardening; and Senderos, an afterschool program that teaches the valuable cultural traditions in Latino heritage.

When it comes to helping children out, Cariño says she sees the need in the kids she works with, and that work never ends. With so many youth-focused groups working on causes from the environment to social justice, she feels that these organizations can make donors’ money go very far.

“From my point of view, I work hard and I feel like there’s never enough,” Cariño says. “I put my heart and soul into the work, and I never feel like it’s enough.”