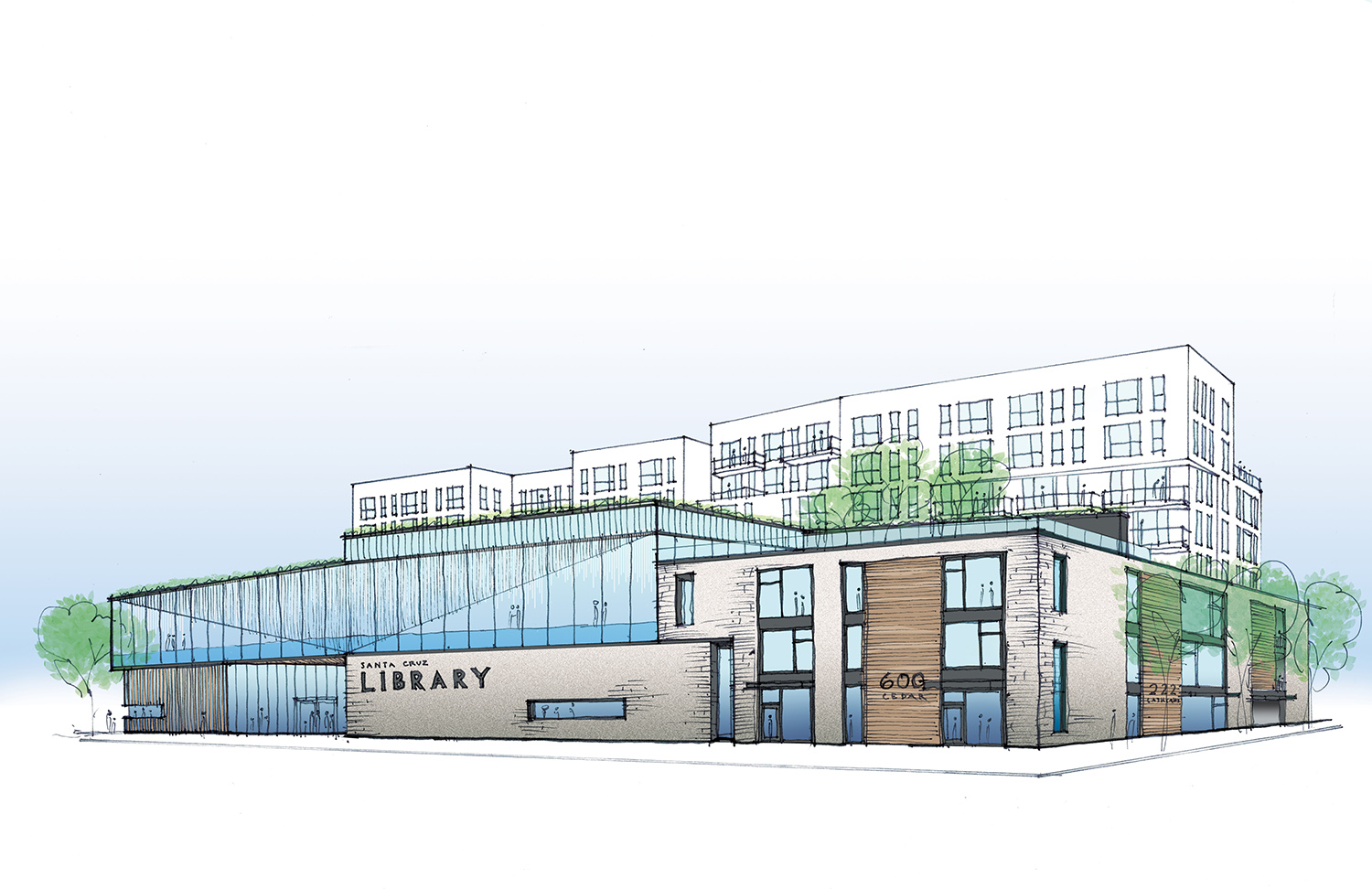 Santa Cruz’s mixed-use library project received yet another round of updates this week, and while the changes were well received by most at Tuesday’s City Council meeting, opposition to the project remains.

The city of Santa Cruz has been working on updating its decaying library since voters approved Measure S in 2016, an initiative that provided funding for library renovations across the county. The original plan for the update was to build five stories of parking above a new library.

But now, the city plans on building a two-story library with 310 parking spaces, adjacent to an 85-foot affordable apartment building. The construction would happen at the parking lot on the corner of Cedar and Lincoln streets, the site of the popular weekly downtown farmers market.

“When I was first campaigning for City Council, I’d heard that the site would have a six-story parking garage,” said Councilman Justin Cummings, who told voters he opposed the initial project while running for office in 2018. “But what’s before us today, I feel like it’s a really big improvement.”

The updates modify a few elements of the master plan that the City Council approved in June 2020. Jayson Architecture, the firm hired by the city to design the project, collected suggestions from the public to create the library’s new design during a series of workshops held in October.

The new plan, approved unanimously by the City Council at Tuesday’s meeting, increases the affordable housing units from 50 to a minimum of 100 and decreases the parking by 90 stalls. The vote also approves new design elements, like a green roof and an adjacent roof deck, and expands the library to accommodate a daycare facility.

“The city’s thoughtful and proactive approach, and incorporation of community input, in designing the library mixed-use project has entirely paid off,” said Emily Ham, the executive director of the Santa Cruz County Business Council.

Her sentiment was echoed by multiple callers, who praised the library’s new design elements and additional affordable housing units.

But some voiced concerns that have long followed the proposal: what would the construction mean for the future of the weekly farmers market, and why won’t the city simply renovate the existing library at 224 Church St.?

One group called Our Downtown, Our Future is collecting signatures to bring these issues to the voters as a ballot measure. Our Downtown hopes to make Lot 4, the lot that the mixed-use library would build affordable apartments on, the permanent location for the downtown farmers market. The group also wants the city to remodel the current library, a plan that both the Downtown Library Advisory Committee (DLAC) and Downtown Library Subcommittee found would be costly and limit the project.

But some have also questioned Our Downtown’s true intentions, wondering if the ballot initiative is simply a way to block affordable housing and dictate where it belongs. John Hall, one of the organizers of the initiative, has maintained that Lot 4 simply makes for a better location for the farmers market.

Should the ballot initiative collect enough signatures and be approved by Santa Cruz voters in the November 2022 election, the library project would have to stop, City Attorney Tony Condotti confirmed.

For now, the project will have one final round of feedback before it will begin construction. It could be completed sometime in 2025, the city says. People will have two more opportunities to give input and contribute to the library’s final design elements at meetings that will be posted at the library’s project website.