.The Neighbor’s Pub Wants to Be Santa Cruz’s LGBTQ+ Hub 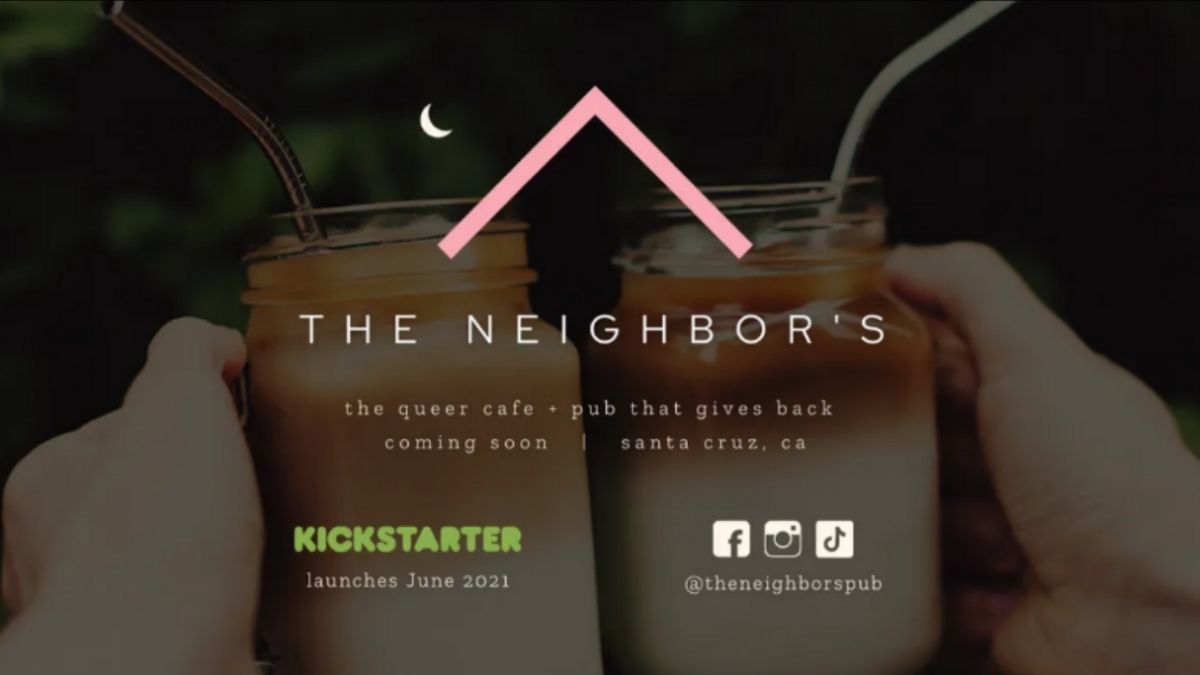 It’s no secret Santa Cruz likes to pride itself on its … well, Pride.

Since 1975, Santa Cruz has held yearly Pride events, making it the third oldest in the state behind San Francisco and Los Angeles. Every year it continues to grow larger and become more inclusive, with sub-marches and events—like the annual Dyke Trans March, which this year celebrated its 28th anniversary—branching off.

Walk around Santa Cruz and it’s hard to miss the proudly displayed, rainbow flags and stickers adorning windows to represent the city’s multitude of genders and sexualities.

But for members of the LGBTQ+ community, Santa Cruz is not always the inclusive hub it wants to be. Sure, there are queer-friendly places with weekly, monthly or semi-monthly events, but for the LGBTQ+ community, there’s a big difference between a place that’s friendly to you and a place where you belong, says Frankie Farr.

“My whole life has been as a marginalized person,” Farr says. “When you finally get a space that’s intentionally for you, you feel like you’re home.”

That’s what led Farr—whose pronouns are they/them—to come up with the idea for The Neighbor’s Pub, an LGBTQ+ cafe and pub open to everyone, but specifically designed as a queer space.

By day, The Neighbor’s Pub will be an animal-friendly cafe, boasting snacks and both alcoholic and non-alcoholic beverages. It will also be a place to host events like “Each One Teach One,” scheduled classes and lectures themed around marginalized communities. After 8pm, the space will become a venue for local artists, musicians, drag performers, LGBTQ+ open mics and more.

“When you go to a place that’s ‘friendly’ towards you, you’re still not able to be fully free,” Farr says. “You’ve got to really read the room on whether you can be yourself. It’s a totally different experience.”

The Neighbor’s Pub is an idea Farr has kept in the back of their mind since moving to Santa Cruz in 2015. They picked the name to highlight the pub’s role as a community space, and the vague moniker can provide an easy escape for some. For instance, if someone is in an unsafe living situation they can say they are “Going to the Neighbor’s” without pushback, Farr says.

Farr wasn’t ready to come out to the community with it until this year. And Santa Cruz has embraced it with open arms.

The Kickstarter was only launched on June 1 but quickly met its initial goal of $10,000 by June 6. Now it’s over halfway to the $26,000 goal they are trying to reach by June 26, the fifth anniversary of the Obergefell v. Hodges marriage equality decision. Farr already has a location picked and is working on securing it, but doesn’t want to say where until the lease is signed. However, they did tell GT it will be downtown.

“I’ve always wanted a place like this in Santa Cruz my entire life,” says Jordan Fickle, part of the queer art collective Cuddle Chunk, along with partner, Patrick Stephenson.

Fickle and Stephenson have volunteered their time to create promos for the Neighbor’s, ranging from graphic designs to a short music video highlighting Santa Cruz’s lack of gay bars. In it, Fickle tries to build one himself in a variety of places like the cemetery and forest—with hilarious consequences.

“There’s something that straight people don’t fully understand,” he says. “When you’re queer and in a restaurant or at the movies with other people, you’re always the guest. You’re always the outsider.”

Stephenson agrees, pointing out traditionally LGBTQ+ spaces in the Bay Area are disappearing.

“A lot were lost during the pandemic, including the Stud in San Francisco, which is the most similar to what Frankie is proposing,” he says. “A queer space that isn’t [just] for men or women but for everybody.”

“In Santa Cruz you have cis-straight people feeling great about living in a place that’s open to queer people and how we’re this really progressive society,” says Vnes Ely, another volunteer spreading the word about The Neighbor’s. “That’s true and you benefit from that because that’s the type of society you want to live in.”

Ely—whose pronouns are also they/them—is known about town as the drummer for queer party rock band Frootie Flavors, and as one of the vibrant personalities at the Downtown Information Kiosk on Pacific Avenue. They also run QueerCruz.com and the Queer Cruz Facebook page, both which promote all LGBTQ+ events happening in the county.

“We actually need [cis-straight people] to also chip in and treat this like a local amenity that’s important to all of Santa Cruz, not just the queer people,” they say. “We need that support for real.”