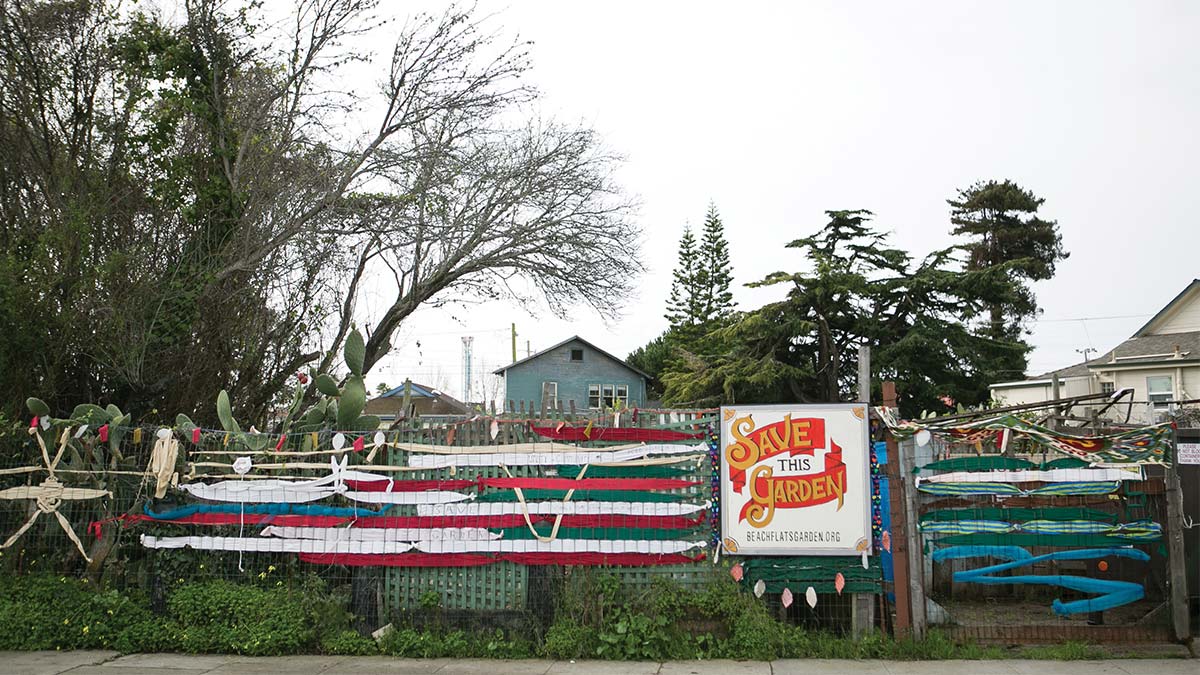 Colorful streamers weave in and out of the metal fence to the Beach Flats Community Garden, framing a large sign proclaiming “Save the Garden” and creating a vivid display for cars whizzing by on Third Street in Santa Cruz.
Garden supporters created the artwork to bring continued attention to the community garden after a recent decision by the Santa Cruz City Council asking gardeners to vacate the garden in order to reconfigure it.
The notice to vacate was an unexpected addendum to a resolution passed on Oct. 27, when the City Council voted unanimously to “negotiate with the goal of acquisition of the current Beach Flats Garden property to allow it to continue permanently as a community garden operated by the city.”
This sounded like a win for gardeners and community supporters, who have been in limbo since March of last year, when the city issued a notice that the Seaside Company, which owns the land, would be reclaiming most of the parcel for its own landscaping purposes. “After the resolution, the gardeners put lots of trust in the city,” garden supporter Senka Pavisic says.
Then in January, the council issued new terms to the gardeners. City officials said that they would only negotiate with the Seaside Company to buy the land if the gardeners were to vacate the premises on Jan. 20, something the gardeners have yet to do. They are also calling on gardeners to sign a letter wherein they agree to surrender 40 percent of the land to the Seaside Company, which owns the land and the Santa Cruz Beach Boardwalk. The city plans to reconfigure the remaining parcel.

“I have garlic that is this high,” he says, using his fingers to indicate about 6 inches. “What am I supposed to do? Tear it up? It is just a little baby.”

“We’ve been trying to work with the gardeners because that is what we have a lease for,” city manager Martín Bernal says, stressing that the original date to leave was November and that originally the remaining garden would be much smaller.
City officials point out that there are two projects in play. The first is reconfiguring a smaller, interim garden on the 60 percent of the land the Seaside Company has agreed to lease to the city for the next three years. The second is making a plan for a long-term community garden in the city.
Bernal says that before they can move forward in negotiations with the Seaside Company, they first need to return the 40 percent of the land that the city does not have a lease for. “It is hard to negotiate with someone when you haven’t even complied with the first thing you said you would do,” he says.
The notice to leave part of the land was still disheartening to the gardeners and their supporters. “I thought they were going to help us, but now it seems like they are not,” says Don Emilio Martinez Castañeda, a founder of the garden and 25-year resident. His plot is on the 40 percent slated for removal. For him, moving his plot would mean losing his decades-old nopales cactus and over two decades of investment in the soil. “I have garlic that is this high,” he says, using his fingers to indicate about 6 inches. “What am I supposed to do? Tear it up? It is just a little baby.”
Castañeda helped write and submit a letter to city council on Jan. 25, which was signed by 17 gardeners. The letter states that the gardeners “are confident that the city will do everything it can to purchase the land” and calls for “a more favorable solution for all.” The letter ends by stating that the undersigned gardeners intend to continue gardening the entire plot.
Only one signed the letter that the city sent them. The group launched a fundraising campaign on Monday, Feb. 1, to try and help the city purchase the space.
“Many of the gardeners are focused on the entire garden,” says Director of Parks and Recreation Dannettee Shoemaker. She has been trying to work with gardeners to redesign the smaller interim garden, but has had trouble finding willing participants.
Their cause has gotten some high-profile attention. United Farmworkers co-founder Dolores Huerta toured the garden on Nov. 13, offering words of encouragement. “There’s people out there that are manipulating the food supply, so we have to counter that with things like a community garden,” Huerta said. A few days later, rock icon Patti Smith, who was in town with her new book, endorsed the fight on stage, saying “Let’s save our gardens! We don’t need any more fucking buildings!”
The gardeners and supporters hope that the community response, as well as the vitality of the garden to the community, can turn their situation around. “This garden is essential for the community. It is food security,” says Pavisic. “There are plenty of places that the Seaside Company can put their landscaping business. If we lose the garden, who gets hurt in that situation? Seaside doesn’t, the city doesn’t, the community does.”
Amidst the back and forth, the future of the garden remains uncertain, even to city officials. “How it will turn out?” says Shoemaker. “Honestly, I’m not sure.”