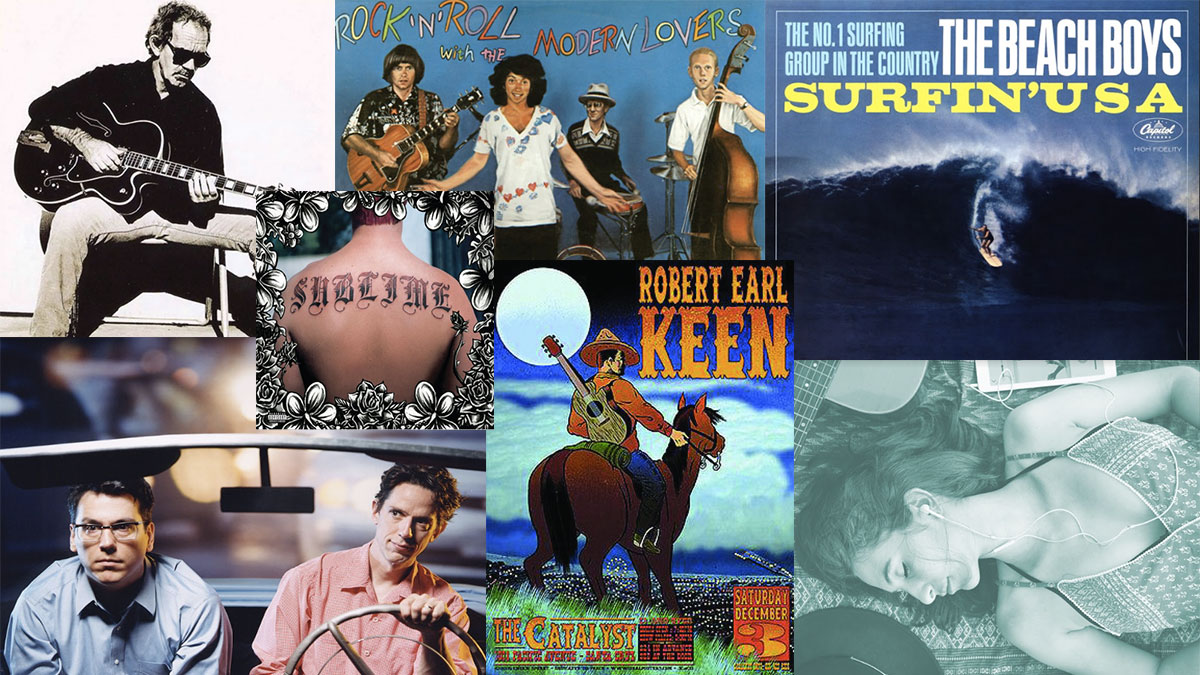 I’ve been collecting songs about Santa Cruz for years, not really doing anything with them besides putting them on mixes for friends who would get a kick out of them, and occasionally playing them on a radio show. It wasn’t research for anything, just a fun thing that always made me think about how interesting it is to see (or, in this case, hear) how one place can be viewed from so many different perspectives. To hear a song about your city can make you look at it in an entirely different way, or make you laugh at how much you can relate to the songwriter’s point of view.

Thanks to Jacob Pierce, this Santa Cruz song habit finally has a purpose. After talking about and sitting around listening to these songs, we started hashing out a “ranking” of which were best. Which we took very seriously, of course; in fact, arguing passionately over this totally ridiculous and arbitrary list was my favorite thing about the doing this story. That, and all of the Santa Cruz songs I discovered for the first time. Thanks to Devil Makes Three for giving us a (flimsy) excuse to write this story, and to you, the reader, for indulging it. Hope you have as much fun with it as we did. And while I’m at it, thanks for reading every week; it’s been a pleasure and a privilege to bring you the news this year. And one more big thanks to those who donated to our Santa Cruz Gives nonprofits this holiday season. If you’ve been meaning to, but never quite got around to it, you can do so at santacruzgives.org through Dec. 31. Happy new year!

Too Much of a Good Thing

Presidents use the National Antiquities Act to protect ecologically significant land by designating it a national monument. With few exceptions, environmentalists enthusiastically and unanimously welcome it.

Coast Dairies, the 5,800-acre property stretching up the coastal hills and canyons from Highway 1 north of Santa Cruz, is one of those exceptions. Two years ago San Mateo-based Sempervirens Fund launched a well-funded campaign to make Coast Dairies a national monument. The Santa Cruz community, with little detailed knowledge of the “facts on the ground,” responded eagerly to the campaign’s promises to save redwoods (actually, they were nearly all clear cut 100 years ago) and protect the property from development. Local environmental activists, who fought for years to preserve Coast Dairies, were less enthusiastic.

Why? Because that battle has already been won. Save-the-Redwoods League acquired Coast Dairies in 1998 and it was given to the federal Bureau of Land Management in 2014, accompanied by ironclad deed restrictions and a Coastal Development Permit that permanently prohibit development. Monument status will do little but greatly increase visitation to the property, without any guarantee of additional funds for stewardship, and local police, fire and rescue services, already stretched thin, will be overburdened.

The best way to ensure that Coast Dairies isn’t impacted by too many human users—cyclists, hikers, equestrians—is to let BLM quietly manage it, with local oversight. Monument status will just be too much of a good thing. Write or call the White House and tell the President that.

I am a senior in high school who attends Aptos High, and I have found myself very concerned by the recent police shootings in my town. It seems like in our community, police are trained to confront all threatening situations by using force. This tactic does not work for every situation. Especially when dealing with people who are mentally unstable. These people require special training to be properly dealt with. When police apply their common tactics to these kinds of situations, it intensifies them, and makes them far more dangerous. I believe that the issue of police aggression is an issue that is pressing and needs immediate attention in our community. The two recent cases of police killing people who were in mental crisis are proof that the police need serious training to deal with these kinds of situations in non lethal ways. I believe that police are abusing their positions of power by becoming aggressive and killing people rather than going through the work of understanding and learning how to deal with crises in non lethal ways. I cannot understand why there is not more training in de-escalation and non lethal methods in this community where there are frequent situations in which people are in mental crisis. We as a community need to demand more training in de-escalation and less aggression so that we can all feel safe and protected and feel that our family and friends are safe and protected as well.

MEAL PLAN
The holiday season isnâ€™t over, and even if it were, itâ€™s never too late to make a donation to Second Harvest Food Bank. Every $10 provides 40 healthy meals, and $25 fills an entire barrel with healthy food. Santa Cruz County Government employees raised enough money to provide 183,187 to needy individuals and families, $50,000 above the countyâ€™s goal. To donate to the food bank, go to santacruzgives.org.

SCHOOL BOX
One of the positive stories of 2016 was Santa Cruz County College Commitment, a collaboration between all local colleges and school districts, which has a lofty goal to prepare every student for college and a career. The group, also called S4C, offers programs for students countywide, including a fourth grade visit to Cabrillo College, a seventh grade summit at college campuses and a program to improve SAT scores and aid the application process.

â€œHope smiles from the threshold of the year to come, whispering, â€˜It will be happier.â€™â€