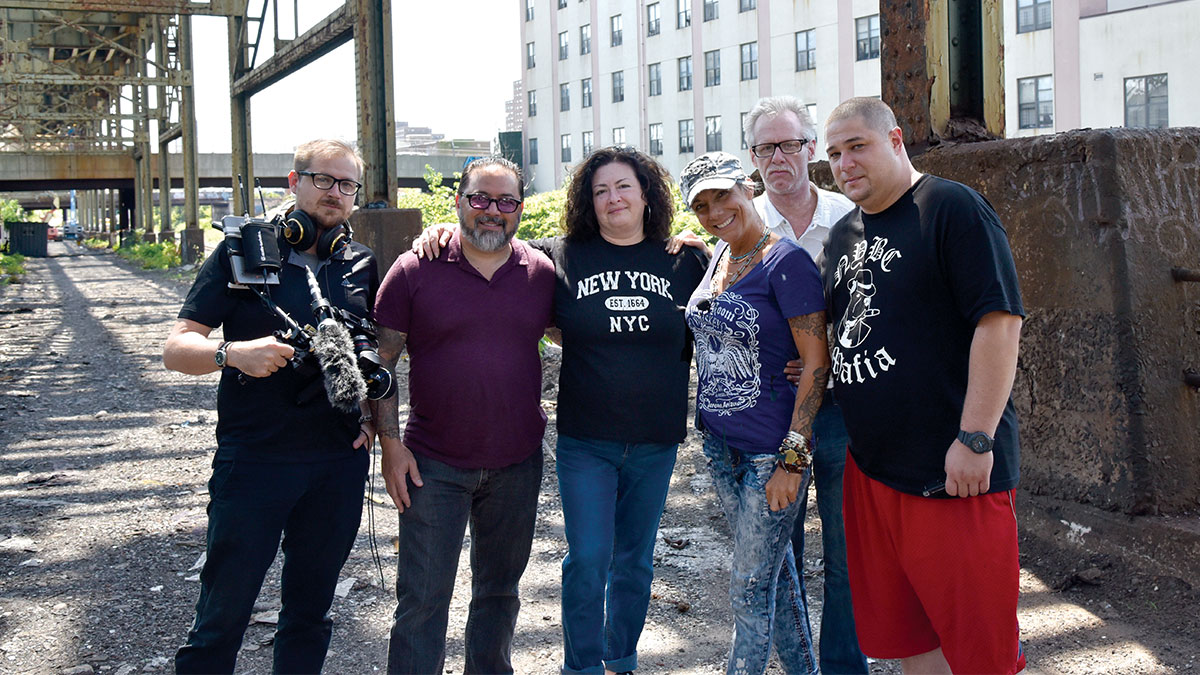 Jana Marcus has the Good Times covers she’s been on over the years hanging on the wall of her office. The very first one is from almost 25 years ago, and it was written by … me. In fact, if I remember right, it was the first cover story I ever wrote for GT. It was a profile of both her and her father Morton Marcus, and while interviewing them together I was entertained by their dry banter and moved by the deep affection and respect they so obviously shared for each other.

So I’ve known Jana a long time, but if you had asked me then why she would be on the GT cover in 2020, I would not have guessed a true-crime book. I love that you can never really predict what she’ll be up to next, whether it’s as an author or photographer. Still, as Wallace Baine’s cover story wonderfully lays out, Jana’s core artistic values are the same now as they were back when I first wrote about her—Mort is a big part of this book, and it turns out that the mob murder at its core is part of a family secret she’s been obsessed with for decades. It’s a fascinating story with some crazy twists, and I’m pleased to bring Jana back to our cover to explore it with our readers.

No Time to Congratulate Ourselves

Re: “Youth Movement” (GT, 7/15): As nationwide protests erupted in response to police violence against people of color, thousands marched in Santa Cruz to express their solidarity. Even the police chief knelt down with protesters, much as the SCPD has paraded with community members to celebrate the Martin Luther King holiday.

While these are certainly nice gestures, it strikes me that for many white liberals, this is more an exercise in patting oneself on the back, rather than seeking to understand and eradicate racism and injustice. Santa Cruz likes to imagine itself a special place, so tolerant and open, yet in many ways we are subject to the same tendencies as the rest of the country.

In 2007, the only nonwhite City Council member, Tony Madrigal, raised concern about an incident of racial profiling he’d witnessed. Rather than taking the opportunity for discussion, or launching an investigation, the white establishment attacked Madrigal. The Sentinel ran an editorial calling for him to resign, while fellow council members Reilly, Mathews, Coonerty, and Robinson—all Democrats—signed a statement saying that Madrigal’s allegation, “has been demoralizing to the department and harmful to its reputation.”

The council remained almost entirely white until 2018, when voters elected two young black men. Cummings and Glover won in part due to their support for rent control, which lost at the ballot, but turned out thousands of voters. Yet within days of their swearing-in, the overwhelmingly white landlord lobby began threatening a recall. Sure enough, they eventually used leftover real estate money raised to fight rent control to fund a spurious recall campaign, based largely on the narrative of Glover—a large black man—as intimidating and “bullying” to (white) women on staff.

Although an $18,000 investigation failed to substantiate all but one trivial claim, and urged Council members to resolve conflicts internally, the white liberals on council continued to play up ugly stereotypes of the intimidating black man—even as Myers herself came unhinged, shouting angrily at Glover at a meeting and pounding her fist, in behavior far worse than his alleged wrongdoings.

The real reason for the ouster of Glover, a Kingian nonviolence trainer, is that like King and many others in the movements for black liberation, he acted as a champion for the poor and marginalized, including renters and the unhoused. While these are not strictly racial issues, race plays a huge role in who owns land and wealth, due to factors ranging from redlining to inequalities in education.

It’s easy to walk down West Cliff and say one opposes racism, but it’s harder for Santa Cruz to grapple with that we allowed a group of landlords, almost all white, to buy a recall election, replacing a progressive black man who has long championed the very issues central to the current protests with a white landlord who was a lifelong Republican until last election cycle.

Similarly, Santa Cruz has a hard time considering that our police might be subject to the same problems that plague other departments. Yet SCPD shot and killed Sean Arlt, a young father experiencing a mental health crisis, for wielding a garden rake. A SCPD officer brutalized Richard Hardy, a homeless man they found passed out drunk downtown. Although he was harming no one, they roused him, cuffed him, and then when he resisted being pushed into the car, they slammed him head-first into a curb.

SCPD officials admit that law enforcement is not a solution to homelessness, yet continue to criminalize the poor, destroying camps and ticketing RVs, without offering anywhere else for people to go. Police have also spied on people organizing a parade, lied about protests, and a deputy chief went on TV to smear a progressive candidate as “a dangerous anarchist” for hanging a banner at a protest.

The city of Santa Cruz has five sister cities, including the Japanese city of Shingu. In early August, the sister city committees of Santa Cruz and Shingu will host two virtual events to recognize the bombs dropped at Nagasaki and Hiroshima, as well the efforts toward peace. Anyone can participate by observing 30 seconds of silence, followed by 75 seconds of bell ringing on Wednesday, Aug. 5 at 4:15pm and Saturday, Aug. 8 at 7:02pm. Use hashtag #USJapanBells when sharing photos and videos on social media.

Mar 27, 2020 – UPDATE, Aug. 3, 6pm: A previous version of this story misreported the hashtag for the bell ringing in memory of the atomic bombs that the U.S. military dropped on Japan.

Santa Cruz began construction on a citywide Pedestrian Crossing Improvement Project on Monday. The project, expected to be completed in December, will include new ADA-accessible curb ramps, pedestrian-activated beacons, traffic striping, pavement markings and regulatory and warning signs. Construction will occur on weekdays from 7am-4pm. The project’s goal is to increase walking and cycling safety throughout the city. The project’s $1 million price tag is fully funded through a Highway Safety Improvement Program grant. Any concerns or questions may go to Project Manager Dan Estranero at [email protected] or 831-420-5189.

“Mysteries abound where most we seek for answers.”

Next ArticleThings To Do (Virtually) in Santa Cruz: July 29 – Aug. 4