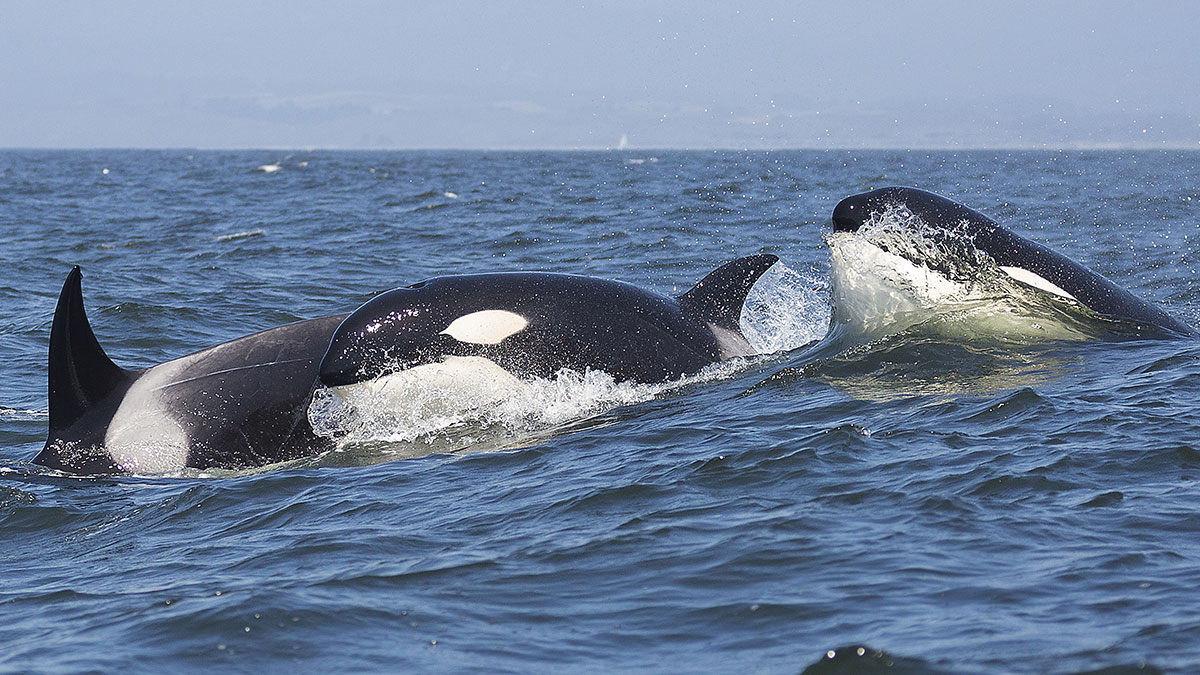 At the end of March, Josh McInnes was aboard the Marine Life Studies research vessel when he spotted a pod of orca whales approaching. As the group got closer, McInnes realized that he recognized practically every individual in the group.

McInnes, who lives in British Columbia and serves as Marine Life Studies’ research coordinator, surveyed the shape of each killer whale’s dorsal fin, as well as any notches and scars, as they came up to breach. He watched the way the orcas moved and surveyed their saddle patches, or the distinctive gray areas that wrap around their dorsal fins.

McInnes realized that the whale mob in front of him was the L-Pod, a group of orcas that normally frequents the same Canadian waters he does.

McInnes is a self-described “citizen scientist.” He takes at least a month off every year from his work as a nature guide to come to the Monterey Bay and study orcas and Risso’s dolphins, which he calls “ghosts of Monterey” because of the pale scars that cover much of their bodies. McInnes and his partner Chelsea Mathieson, an aerospace technician by trade, stay with friends in Watsonville. Each invested thousands of dollars in this trip, with additional donations from friends and supporters to help fund their work.

Mathieson’s specialty is in northern right whale dolphins, which are difficult to spot and identify since they have no dorsal fins. Little is known about them, and Mathieson says there could be anywhere from 25,000-1 million of them, according to existing literature. On a recent trip out of Monterey, McInnes and Mathieson spotted 300-400 of those northern right whale dolphins leaping out of the bay.

“As far as you could see, across the horizon,” Mathieson explained to GT at a recent afternoon house party in Carmel to raise awareness about local whales. “I’ve never seen anything like it.”

BREACHING TO THE CHOIR

McInnes and Mathieson are amassing data and combining it with records from Peggy Stap, the nonprofit’s executive director. The team hopes to publish its multi-year findings soon.

“It’s a huge asset for them to come down and make connections,” Stap says. “It’s like the difference between studying one fish in a pond, as opposed to a huge lake or an ocean.”

McInnes says the team is starting to see patterns as they compare British Columbia whales to  those in the Monterey Bay. Researchers are seeing differences in prey selection, as well as similarities in group sizes.

Sharing information is a big part of the local marine biology community. Rachel Kippen, the new executive director for O’Neill Sea Odyssey, got a call recently from Stap letting her know that a big pod of orcas had arrived in the bay.

The Sea Odyssey’s catamaran takes elementary school children out on the water to teach them about ocean life. Kippen says instructors are ready to pivot the lesson plan at a moment’s notice, should a student point out something exciting on the water.

Kippen remembers hearing about one day last year when a field trip captain learned that there was a large pod of orcas a few miles offshore. After checking-in with the class teacher, the crew scrapped its lesson plan and made a beeline for the pod in hopes of finding the whales. The plan paid off.

“Are you freaking kidding me?” Kippen remembers thinking. “You’re in the fifth grade, and you spent your morning surrounded by orcas? There’s a short list of people around here that have ever experienced that! How do you not become an ocean scientist after something like that?’’

Different populations of killer whales develop their own special diets as they grow up and learn to hunt, a process that McInnes wants to learn more about.

The other day, the Marine Life Studies team spotted a pod of transient orcas that works together like a naval fleet at war to hunt baby gray whales in the Monterey Canyon. Transient killer whales typically feed off marine mammals, with individual pods developing a preference for calves, sea lions or harbor seals. Offshore orcas eat sharks. Southern resident killer whales, which include the L-Pod orcas, are typically fish eaters. The L-Pod whales prefer salmon.

This spring marked the first time since 2011 that L-Pod was spotted in the Monterey Bay, and the fourth local sighting since 2000. The pod, which is made up of 34 whales, normally splits up, but McInnes was able to identify 28 L-Pod whales on the team’s recent encounter, and he believes the other six may be in the group as well.

Southern resident killer whales aren’t doing well, and their numbers are dropping. McInnes isn’t sure of the significance of L-Pod’s trip to the Central Coast, or that the group appears to be sticking together. But he says it’s possible that they’re finding a lot of fish, given that salmon season is getting started. Many resident orca calves have been dying off, so McInnes was delighted to see that the latest addition to the orca group, a months-old calf researchers have named L124—nicknamed “Lucky”—looks to be doing well.

McInnes, who grew up being fascinated with bugs and amphibians, says that getting involved in science as a hobby is a great way for anyone with a curious mind to make a positive contribution to the world, or to enrich their own life.

Anyone can grab a notepad and go into their garden to study something, he says.

“Discovery science hasn’t died. Wanting to know about something is so important—just being interested,” McInnes says. “I think people forgot that just being interested about an animal doesn’t have to be about profit. It can be just for our own knowledge.”

Previous ArticleNUZ: Will UCSC Ever Build More Housing On Campus?

Next ArticleCar Owners Get Smashed in Santa Cruz