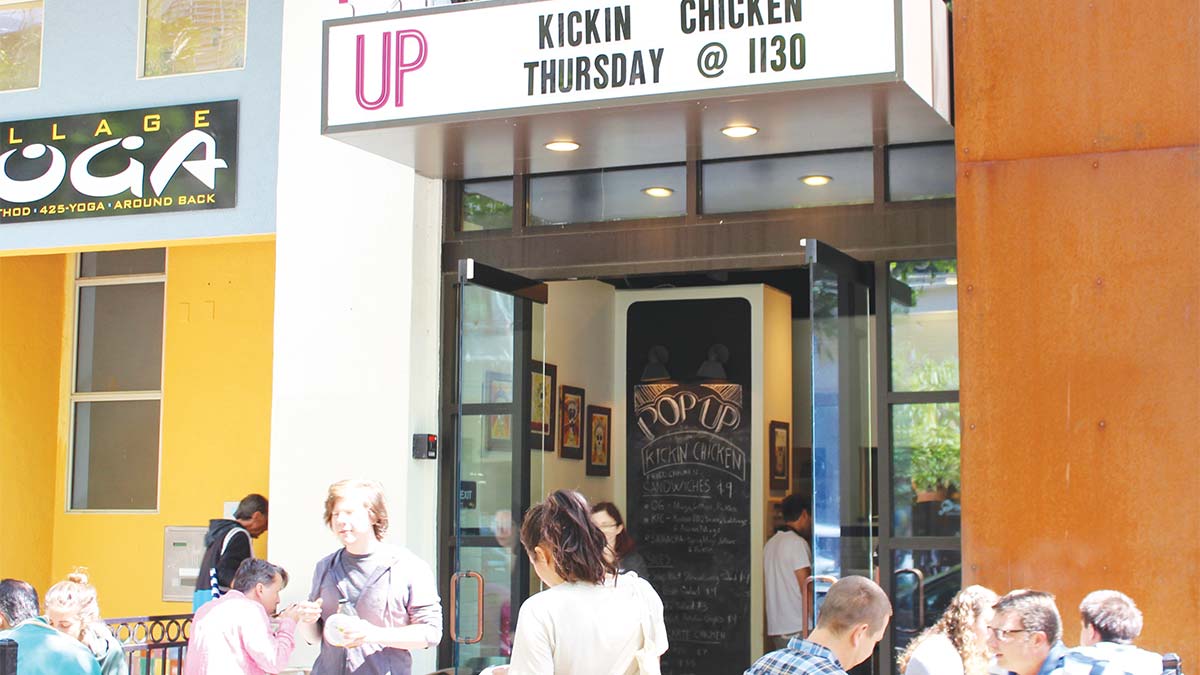 When Tighe Melville and chef Zachary Mazi met in 2014, they set out to make the kind of food they felt was missing in Santa Cruz. LionFish SupperClub held regular pop-ups at the Food Lounge throughout 2015 and into 2016, featuring menus inspired by Asia, India, the Middle East and beyond, exploring these flavorful cuisines while making good use of “some of the best local ingredients in the world.”
“There’s a hunger here for more diverse foods, and it’s just not available,” says Mazi.
“What diners desire is shifting,” agrees Melville. “There are a lot of young foodies in Santa Cruz who grew up here and want more. I think pop-ups are addressing that demand. What’s cool, too, is a lot of businesses are embracing it. Midtown Cafe, the Food Lounge, MJA Winery, the breweries … They’re seeing there’s value in it.”
LionFish SupperClub recently added a “permanent pop-up” called Ulterior, a brick-and-mortar kitchen above Motiv, on Pacific Avenue, earlier this year. Mazi and Melville’s goal is to maintain the inherent playfulness of their food that is so well received by their fans in their new space.
“We feel like we have this blank canvas to paint a more conceptual restaurant,” says Mazi. “California cuisine is kind of played out and there’s a lot of restaurants doing the same thing, but slightly different. Variance draws people to pop-ups—‘What are they doing this week? Let’s check it out!’”


Pop-ups work much differently than a typical restaurant. The service is almost always to-go, lines tend to be long and menus brief. Arrive late and you run the risk of seeing a heavy chalk mark across your favorite item after they’ve run out. But customers keep coming back for more of these adventurous eats, and more entrepreneurs are using this low-investment format to test the market waters.
It was just a couple of years ago that local culinary entrepreneurs really began embracing the format. And rather than burning bright and then fading away, pop-ups have become a new norm. Locals seem eager to come out in droves for these gone-in-a-flash restaurants, whose service occurs over the course of a few intense hours on a single day, perhaps once a week or even more infrequently. Lines down the block have been typical in many spots, and yet no one really seems to mind.
Assembly restaurant partners Zachary Davis and Kendra Baker were inspired by the underground food movement in San Francisco when they decided to turn an adjacent street-facing storefront into POPUP, a reconfigurable space that hosts a variety of food events. They knew pop-ups were taking off in the Santa Cruz food scene, and wanted to create an opportunity for them to do something more public in a certified kitchen, while still maintaining a spontaneous vibe.
“Santa Cruz has a very creative entrepreneurial spirit, and it exists in the food world as well,” says Davis. “The issues we have around food trucks have pushed some of the people that might have gone in that direction into other lower-overhead ways of trying out their business. With a pop-up, they can experiment, learn, and test their product without the larger commitments of opening a restaurant.”
Throughout 2015, Manresa Bread, the bakery offshoot of the Michelin-starred Manresa restaurant in Los Gatos, supplemented their farmers market appearances over the hill with weekly pop-ups at POPUP. Co-owner and head baker Avery Ruzicka says that that development phase was crucial for her business.
“It ended up being a testing ground for products that would end up in our own retail space. We could showcase them in the pop-up and get customer feedback, and our own feedback,” says Ruzicka.
They chose to vend on Wednesdays in order to be a part of the downtown farmers market experience, albeit one street over. Says Ruzicka, “At a farmers market and at a pop-up, the line between producer and consumer is very thin. There is no line, you’re right there with that person. That’s really attractive.” Overall, she found the Santa Cruz community extremely receptive to this kind of research and development, frequently selling out of their artisan breads and inventive pastries.
“Santa Cruz has a very well-educated and adventurous, open community. People have the idea of life balance down, and it allows for moments of, ‘Hey, let’s try something new,’” she says. “Living in Santa Cruz turns something that could be mundane into a beautiful, wonderful moment. One way to enjoy the moment is to go out to dinner, try something new, take a little bit of a risk.”

Customer outreach is crucial for any fledgling business, and the transient nature of pop-ups means chefs can bring their food to the customer. That’s a perfect system for Kickin Chicken friends Justin Williams and Danny Mendoza, who started frying chicken in their condo as a way to bring in some extra cash in 2014. Now, they use their popular feasts to introduce their product to potential new fans, who will hopefully get hooked and order their late-night delivery service, now prepared in a professional kitchen at the Food Lounge. So far, their methodology has worked. They’ve gone from being the self-described “drug lords of late-night chicken” to weekly pop-ups and catering to looking for a permanent location.
Mendoza and Williams feel that while the brevity of pop-ups is innate to the form, the characteristic spontaneity is largely an illusion. They definitely want people to show up. “Marketing is 90 percent of the work,” says Mendoza. “The instantaneous marketing where you send out a tweet or an Instagram post and say, ‘I’ll be here in an hour’ only works for food trucks. It doesn’t work for us,” adds Williams.
Consistency is also key. Pop-ups allow for more creativity than a chef might normally have in a brick-and-mortar restaurant, but if a customer falls in love with a dish, they’ll keep coming back for more.
“Getting a consistent menu has helped us out so much, because people know what to expect and what to order from you. We have people who have ordered every week for a year, more than a year, and sometimes they’ll order a new thing, but they’ll always get the chicken,” says Mendoza.
“Doing something unique is important, too,” says Williams. “I think it would be really hard to do, like, a barbecue pop-up or a burger pop-up, because that’s already readily available here. You have to do something different, and you have to do it really, really well.”
Zane Griffin, who manages POPUP, is always looking for movers in the backyard food scene to bring into the light.
“There’s this underground food culture wherever you go. We see and read about brick-and-mortar places, but there’s a lot of other stuff going on off the books that’s really cool too, and I’ve been talking to those people. I can’t really say who, because they don’t have their permitting together, but that’s who we’re trying to work with and help out.”
He believes that part of the appeal of this kind of dining harkens back to street food culture, which he doesn’t see in Santa Cruz, where you walk down the street and stop just because something smells good. He believes that as people continue to become more familiar with the format, more delicious things will come.
“The pop-up scene is in its infancy. It’s learning to walk. People are still getting used to the concept, both cooks and consumers, but there’s a lot of excitement and interest from the community, which is awesome,” says Griffin. “I think it’s important to have something fresh and surprising. It’s only going to get more exciting and busier as the food artisans of the community start to crawl out of the woodwork and make an impression.”

Previous ArticleWhose Cider You On?