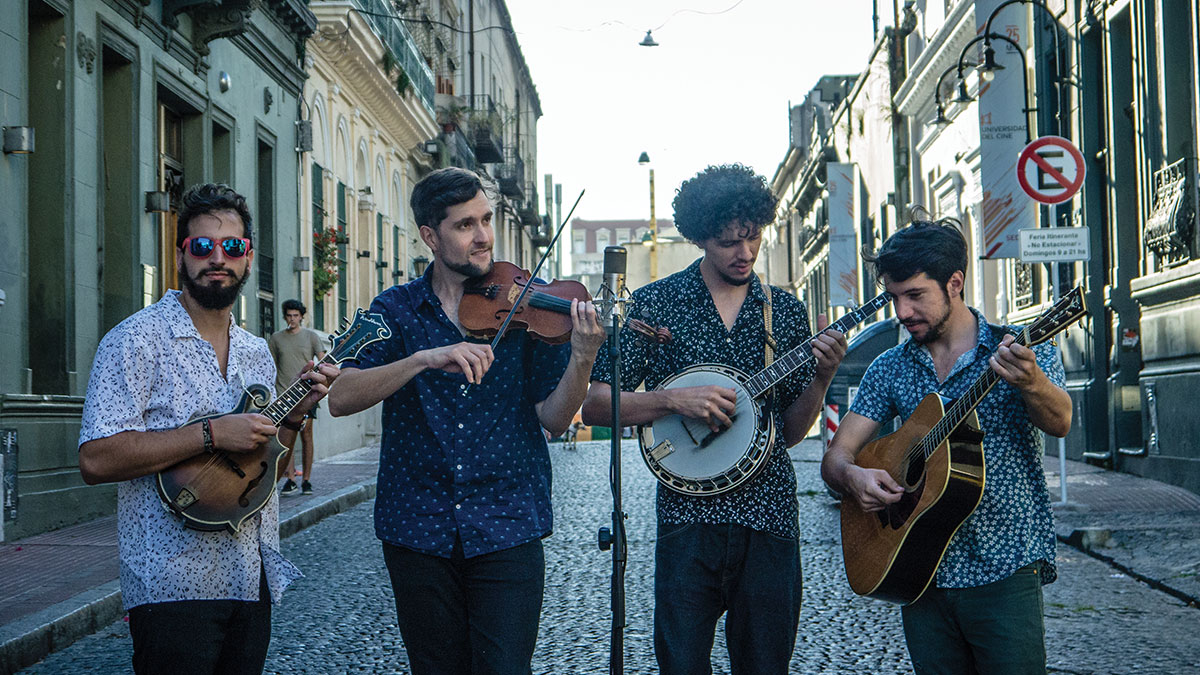 Last year, Buenos Aires-based four-piece string band Che Apalache were on its first ever U.S. tour. Frequently, the foursome played its a capella song “The Wall,” which band leader/fiddle player Joe Troop says is “against that stupid-ass wall that that moron of a president wants to build.”

It’s a gorgeous song with four-part harmonies and rich old-timey Americana influences that takes a firm political stance. (“If such nonsense should come true/Then we’ll have to knock it down.”) The song earned them some hooting and hollering in support—and some negative reactions from audience members who walked out saying, “You just lost half of your fans with that political talk.”

Normally, the group doesn’t sing such explicitly political lyrics. In fact, they prefer to think of their very existence as a much more powerful political statement of cross-cultural harmony: four guys—two from Argentina, one from Mexico, and one from North Carolina—playing a hybrid of bluegrass, old-timey music and Latin folk music with songs in Spanish and English. Or, as they’re calling it, “Latin grass.” As peculiar as the individual components may seem, it ends up sounding quite natural.

Even Troop is a little shocked at how well the concept ended up working out.

“Fusion can be such a dangerous and cheesy thing. There’s so much bad fusion, you’re like ‘Oh god, don’t do that. That doesn’t sound good,’” Troop says. “The music is just a reflection of what we are as people. It’s coming from a true place.”

The concept of Latin grass is a relatively new one for the group. When the band started playing together in 2013, they were doing strictly bluegrass and Appalachian folk music. It wasn’t until just before the group’s first U.S. tour last year that they discussed fusing Latin folk music into the music.

That was also right around the time they were getting good. Initially, Troop, who had moved to Argentina in 2010, started teaching banjo and violin lessons to anyone interested. The guys that are his current bandmates initially started out as his students, primarily interested in the instruments themselves, and less so with bluegrass as a genre.

“I totally indoctrinated them. I was like, ‘This is really cool music,’” Troop says. “I’m a stickler for being rooted in something. Bluegrass is like a code that we can all be rooted in. Bluegrass and old-time Appalachian folk music.”

Before starting Che Apalache, Troop formed a bluegrass duo with an Argentinian musician he had met, Diego Sánchez. His bluegrass quartet came a little later, initially as his side project. When he noticed how good they’d gotten, he shifted gears and focused on them, excited that he could try out some of his four-person arrangements.

“I was training the guys that I’m now playing with how to play from scratch,” says Troop. “All of a sudden a couple years ago, it was like ‘Oh damn, they’re really good now.’ It just sort of happened. It kind of took me by surprise.”

The group released its debut album Latin Grass last July, and has already toured the U.S. twice, finding an audience with bluegrass aficionados, Latin music lovers, and people who don’t really care for either style, but like the melding of the two.

Down in Latin American, where there’s less awareness of bluegrass, the band has been doing surprisingly well, too. Some folks understand the bluegrass language they’re working with, others just react to the music on a primal level.

“The audience down there would get up and dance and join in,” Troop says. “We had a couple of occasions where people were just responsive in a way that Argentinians would be to Argentinian folk music.”