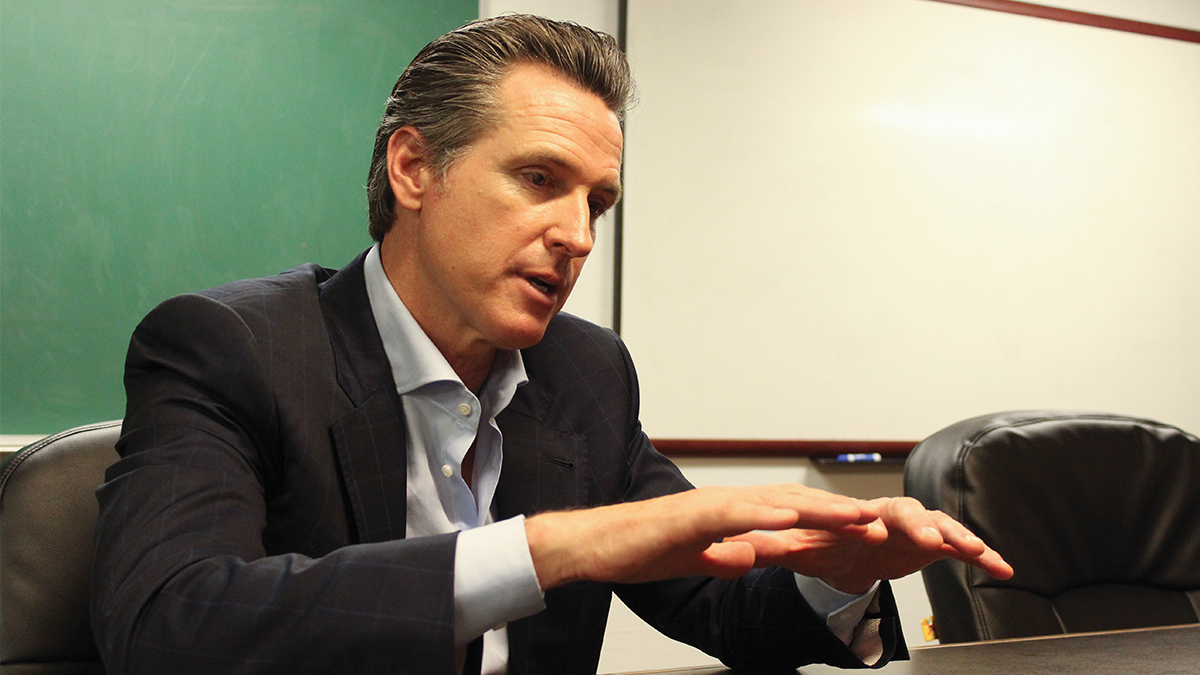 [dropcap]T[/dropcap]he June 5 primary election is finally approaching, but Lt. Gov. Gavin Newsom has been running for California’s top office for a long time.

It was three years ago now that Newsom first threw his hat into a governor’s race that has since heated up, shaping into a battle between Northern and Southern California, and between two ambitious golden boys of state politics. A recent PPIC poll showed Newsom, a former San Francisco mayor, with support from 23 percent of voters, and former Los Angeles Mayor Antonio Villaraigosa only two points behind, with 21 percent, which was within the poll’s margin of error. We sat down with Newsom during a meet-and-greet with the Laborers’ International Union 270 in San Jose, to talk about cannabis, income inequality and green energy.

You and Villaraigosa have both railed against income inequality, and highlighted what it does to young children. Can California provide prenatal care, early intervention, maybe even free preschool without federal funding?

GAVIN NEWSOM: We can. We’d love to see the federal government recognize what all the experts already know, but the state can amplify better behavior at the local level. Local government needs to significantly increase its investment, counties need to increase their investment, and certainly the state needs to incentivize that. And that’s a big part of what we want to do is incentivize better behavior at the local level. I think what’s happened in the past is governors have done—we’ve modestly invested in this space, but not to the degree that I’m committed to.

How do you pay for it?

You garner a lot of support from Silicon Valley, the tech sector, and you’ve championed the tech industry as a potential leader in solving some of the inequalities we’re grappling with. But in many ways, Silicon Valley has exacerbated these social ills. As governor, how would you hold the industry accountable to upholding its end of the social contract?

One of my closest friends, the godfather of my firstborn, Mark Benioff, is a shining example of someone who gets it and gets it done. Follow his example. He’s been an unbelievable leader. He’s walked his talk on gender pay and pay equity, and environmental stewardship. He just announced what they’re doing with the Salesforce tower in terms of meeting LEED platinum levels, and the incredible water efficiency proposals that he’s advancing. My point being that on issue after issue, on homelessness, philanthropy contribution, on what businesses can do in real time—not waiting until a massive amount of wealth is concentrated and then at the end of your life you redistribute it—he has marked, I think, the type of example that others should follow.

A lot of ambitious California politicians, yourself included, have said that communities need to increase housing construction. What’s your plan to get local governments to build their share of affordable housing?

They need to be held to account. In our housing plan, we want to assign sanctions for those who aren’t meeting their housing element. We actually want to be punitive. You got to be tough. How? By withholding transit dollars.

Let’s talk cannabis. One of the complaints we’re hearing is about the high cost of compliance, the high cost of regulation under Prop. 64, which appears to be prompting people to turn back to the black market. What do you think the state can do to strike a regulatory balance here, to prevent illegal sales and to keep the industry above board?

Look, I was the principal proponent, principal author of cannabis legalization. I spent three years organizing an effort to get it on the ballot, and to get it passed, and I feel, as a consequence, a great sense of responsibility to make sure it’s done right.

I made this point on Election Day, but I’ll repeat it. Legalization is not an act that occurred on Election Day. It’s a process that will unfold over a course of years, and that’s why you’ve got to be open to argument, interested in the evidence, those kinds of concerns, and iterative in terms of those applications to the rules. As you know, in the initiative we allowed for a modest majority to amend so we don’t have to go back in front of the voters. So we have the ability to address these issues in a way that won’t allow them to fester.

On clean energy, you said today, ‘It’s a point of pride and a point of principal for the next governor to change the bar.’ In what ways would you raise that bar and turn Gov. Brown’s memoranda of understanding on these issues into actionable steps?

If the governor doesn’t sign a bill to get to 100 percent [clean energy] by 2045, then I will. I want to eliminate diesel by 2030. We have to move forward with regionalizing our grid. We’ve got to focus on storage enhancements. I want to double all local efforts. Look, I’m the guy who did the plastic bag ban, I was the one that presided over a city with the first composting requirements in the U.S. and the highest green building standards in the country. San Francisco was the national leader in low carbon green growth. Every year, San Francisco is being called out as one of the greenest cities in the United States—if not literally the greenest. Portland, Oregon, stubbornly, is right there with us. I’m passionate about these issues. Picking up where Gov. Brown left off is very exciting to me and enlivening, and so this is an area where no one has to convince me to maintain our leadership internationally, not just nationally.

Next ArticleDeepak Chopra Visits Santa Cruz to Talk About Bodymind