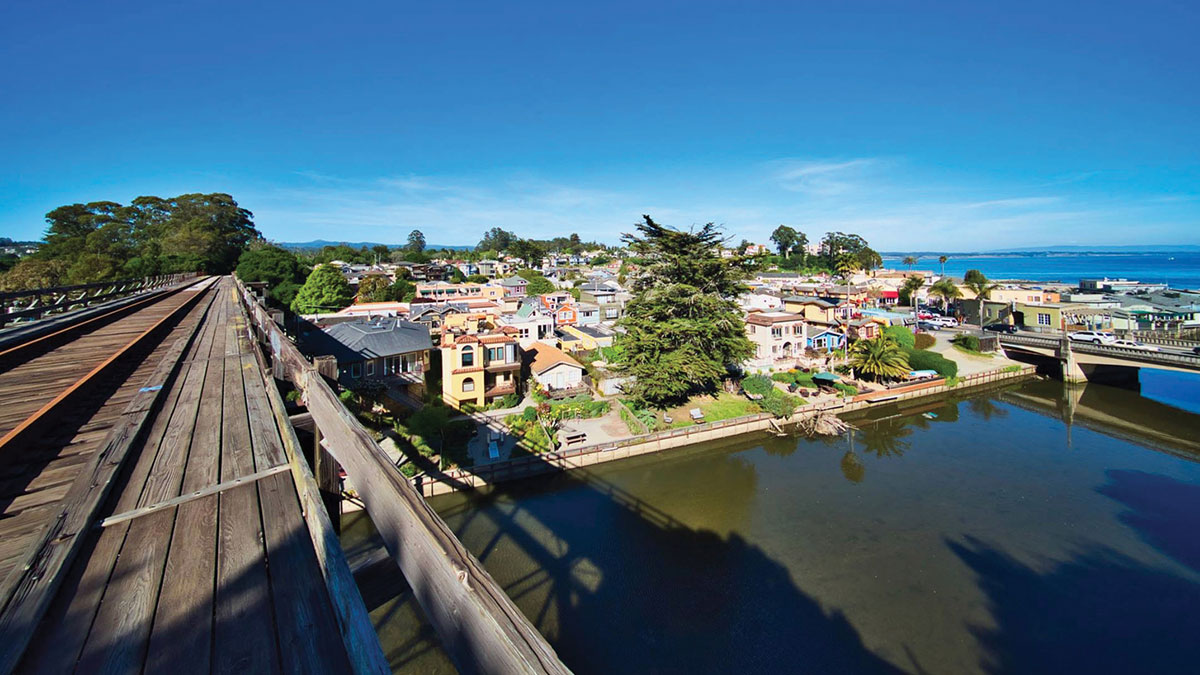 Activists in Santa Cruz County’s smallest city got the green light this week to move forward with a vote that has the potential to play an outsized role in the future of Santa Cruz County transportation planning.

Judge John Gallagher ruled on Monday, Aug. 20 in favor of Greenway Capitola petitioners, allowing their ballot measure on the rail trail to proceed to the Nov. 6 election. Environmental attorney Sara Clark, who represented the Greenway side, says she wasn’t surprised by the ruling, even though Capitola officials had expressed concerns about the measure’s wording.

“In elections law, there’s a pretty standard rule that most challenges to an initiative are best ruled on after the voters have a chance to weigh in,” Clark says.

And it isn’t just the Greenway Capitola measure that voters are talking about this election season. With the November election fast approaching, discussions over a few closely watched local ballot initiatives—on topics like rent control and finance—have begun heating up.

The Regional Transportation Commission (RTC) has plans to build a bike and pedestrian path along the county’s coastal railroad tracks and leave room for future rail transit—an approach the commission is currently evaluating in its Unified Corridor Study. But supporters of Santa Cruz County Greenway have been pining for a different approach, given their concerns about the high costs of the rail-with-trail plan, and questions about ridership estimates they say are too meager to have any impact. Greenway supporters envision a wider trail along the length of the corridor with no train tracks.

Parts of the rail corridor are rather narrow, and the rail trail’s official guiding document, the Monterey Bay Sanctuary Scenic Trail Master Plan, is unclear about where certain bike and pedestrian detours may be needed—particularly in Capitola. In order to build a bike path that spans the valley over Soquel Creek Water District, construction crews would likely need to build a brand new bridge—about 200 feet long and a few dozen feet high.

Measure L, the new Greenway Capitola initiative, essentially asks voters what sounds like a simple question: Do you support keeping the bike and pedestrian path on the protected corridor, instead of detouring it onto city streets?

Most people expect Capitola voters to say “yes,” which is why the measure could have an impact going forward, even if it technically will have no impact on the decisions of the RTC. Most measure supporters don’t want a train on the tracks.

But Capitola City Attorney Tony Condotti sees the wording as “impermissively vague.” He says that the initiative conflicts with existing city plans and complicates efforts to make needed bike infrastructure improvements nearby, including spur trails shooting off the main route.

Clark argues that the measure’s language is actually pretty straightforward, and says that Capitola staffers and council “were manufacturing inconsistencies where there weren’t any.”

Capitola Councilmember Stephanie Harlan says this all could have been a lot simpler if the measure just asked whether or not residents support a train.

However, there’s still reason to believe that everyone—both rail and trail supporters—could get what they want, no matter what the outcome of the measure. The RTC has already signaled an interest in making room for both rail and trail through Capitola.

This past June, at the suggestion of Friends of the Rail and Trail Chair Mark Mesiti-Miller, the commission made minor adjustments to its five-year spending projections, as it finalized its new plan. The RTC allocated $50,000 to study building a new bridge through Capitola that could accommodate both rail and trail.

In the city of Santa Cruz, rebuttals to arguments over a controversial rent control measure are due Friday, Aug. 24.

Things got ugly earlier this summer after opponents of the measure initially missed the deadline to file arguments against Measure M, the rent control measure, while supporters of the measure met the deadline. The situation was cause for concern among landlords and rent control opponents. To the initiative’s supporters, it all seemed to good to be true—given the hundreds of thousands of dollars that opponents had already raked in, between local fundraising and cash from outside organizations.

But city staffers admitted they had erred in setting the deadlines unnecessarily early and that the guidelines were confusing, and the city may have even opened itself up to a lawsuit in the process.

With four members recused from a heated public meeting on the topic, the Santa Cruz City Council voted 4-0 to give both supporters and opponents more time to submit statements.

The irony of giving the landlords extra time was not lost on rent control advocates.

“Tenants live with deadlines that have real consequences,” Cynthia Berger, an organizer with the Santa Cruz Tenants Association, said at the meeting earlier this month. “If I don’t pay my rent, that’s immediate grounds for a three-day pay or quit notice.”

Capitola City Councilmember Jacques Bertrand has fond memories of his days as the city’s treasurer, a position that’s now facing a referendum.

“The main thing is people want to know where their money goes, and that’s what the treasurer does,” explains Bertrand, who remembers discovering ways to make to improve the Capitola’s finances in his four-year term from 2008 to 2012.

But the city’s current treasurer Peter Wilk, who Bertrand sought out for the position, says he doesn’t see any reason for voters to elect a treasurer at all, as many of its roles overlap with other authorities like the finance director, auditors and the Financial Advisory Committee. Additionally, Wilk says the budget is very transparent to the general public, and the treasurer has no clearly defined power. Most other jurisdictions—including every other local government in the county—have no elected treasurer position.

The Capitola City Council voted unanimously to place Measure K on the ballot to remove the treasurer as an elected position and instead make it an appointed one. Wilk and some city councilmembers have even floated the idea of eliminating the job altogether. Bertrand has serious reservations about it all, as he feels the treasurer position provides a sense of financial transparency.

Councilmember Harlan has warned Bertrand that she won’t support him in his reelection bid this year if he actively campaigns against the initiative. While Bertrand hasn’t hit the streets in opposition, he says he’s been having conversations with residents about the measure. He worries taking a stand could sink his reelection campaign, but it hasn’t dissuaded him from raising concerns.

Bertrand concedes that the city of Capitola has had at least one activist treasurer in the past, who tested the limits of the position and developed a “caustic” relationship with city officials, but he sees that ordeal as an outlier.

Bertrand admits that it stings a little to see Wilk—who he believes is doing a great job—argue against a position Bertrand took so seriously, but he insists that isn’t his primary motivation in questioning the new measure.

“The reason I’m talking to you is I want the debate,” Bertrand says. “Peter brought up things that need to be talked about. We’re friends—the fact that I don’t like his conclusions doesn’t make him a bad guy.”

Previous ArticleWhy I Married a Muralist