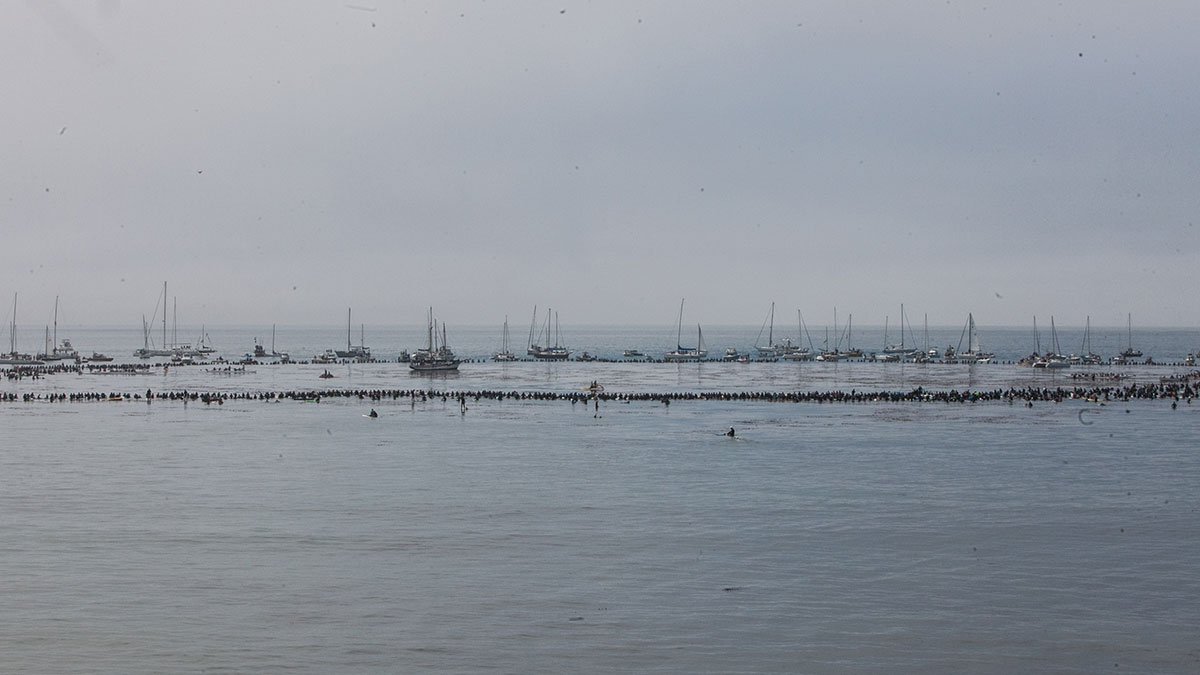 On the morning that surfers paddled out to honor Jack O’Neill, it quickly became obvious that the turnout would match the outsize legacy of the legendary wetsuit innovator, who had passed away at age 94. A huge crowd of a couple thousand surfers gathered, forming a circle in the waters off 38th Avenue on Sunday, July 9.

O’Neill’s former trainer Rocky Snyder looked on from the Team O’Neill catamaran nearby, and, during his quick remarks, proudly yelled into a microphone that attendees had “shattered” the world record for the biggest paddle out ever, a record set by surf enthusiasts from none other than Huntington Beach—Santa Cruz’s arch-rival in the surfing world—just a few weeks prior. Huntington Beach’s number for its paddle was 511 surfers. Huntington Beach’s attempt, sure enough, was good enough for Guinness World Records. But it was still only one fourth, at most, of what Santa Cruz would draw a few weeks later.

Someone at O’Neill Wetsuits did officially submit the Santa Cruz event for the Guinness record too, says Brian Kilpatrick, the vice president of marketing, although he can’t remember who sent it off. Regardless, the amusing chain of events surrounding the effort might just push this old rivalry between two cities that both proudly claim to be “Surf City” to new heights.

Down in Huntington Beach in June, the executive director of the local surfing museum there had organized a paddle out to celebrate the sport’s induction into the 2020 Summer Olympics. (Organizers also hoped that the stunt might help the city secure the honor of hosting the event when the summer games eventually come to Los Angeles.) Committed paddlers had floated around for hours in the water, trying to join hands in one full circle. Holding hands, after all, is a customary part of paddle-out protocol.

But hand-holding is more difficult for a larger swarm, like the one of 3,000 or so that gathered in Santa Cruz a month later. Some Team O’Neill organizers, riding surfboards and personal watercrafts, tried to get paddlers to all join together, but it quickly became obvious that such efforts were futile.

In the days after the Santa Cruz paddle, Guinness World Records spokesperson Sofia Rocher told GT that it could take up to 12 weeks to respond. As of Sunday, Oct. 8, though, it’s been 13 weeks. So we followed up with Rocher and asked: What gives? Were the Guinness bosses in the middle of a drunken argument about Californians and hand-holding? Were judges scouring the Encyclopedia of Surfing and pondering the true definition of the term “paddle out?”

Demurring, Rocher responded that she was “unable to confirm whether or not there have been issues with the evidence received.”

Hmmm, we didn’t ask about evidence. But since Rocher brought it up, we had to wonder if there was a problem with the evidence submitted by someone at O’Neill.

Kilpatrick tells GT that originally the team had been excited to go for the record while planning the paddle. But then it became clear that Guinness would want each surfer tagged with a number and even have organizers keep track of every surfer who went in or out the water that day—all things that Huntington Beach organizers did at their event. “At a certain point, it was like ‘Let’s forget it,’” Kilpatrick remembers. “We’re not trying to break a record, we’re trying to honor Jack.”

Fair enough. Still, one would think there’s plenty of proof that Santa Cruz demolished the record, given that there are dozens of high-res photos of the Pleasure Point paddle, but apparently, photographic evidence is no longer an accurate way to measure crowd size. (Seriously, though, who the heck is in charge of record-keeping over at Guinness—Sean freakin’ Spicer?)

Kilpatrick grew up in Santa Cruz, often known to locals as “Surf City.” He admits that it was tempting to hunt down a surf record set by Huntington Beach, where the visitors bureau officially trademarked the term “Surf City, USA” and eventually went so far as to famously sue a shop on the Santa Cruz Municipal Wharf over the store’s “Surf City” T-shirts.

“But that’s neither here nor there,” Kilpatrick says.

More to the point, we can’t blame So Cal wannabes for their obvious superiority—at least when it comes to shamelessly seeking validation. Heck, if Santa Cruz had crappy waves, we would probably be indoors chasing records and trademarks, too.