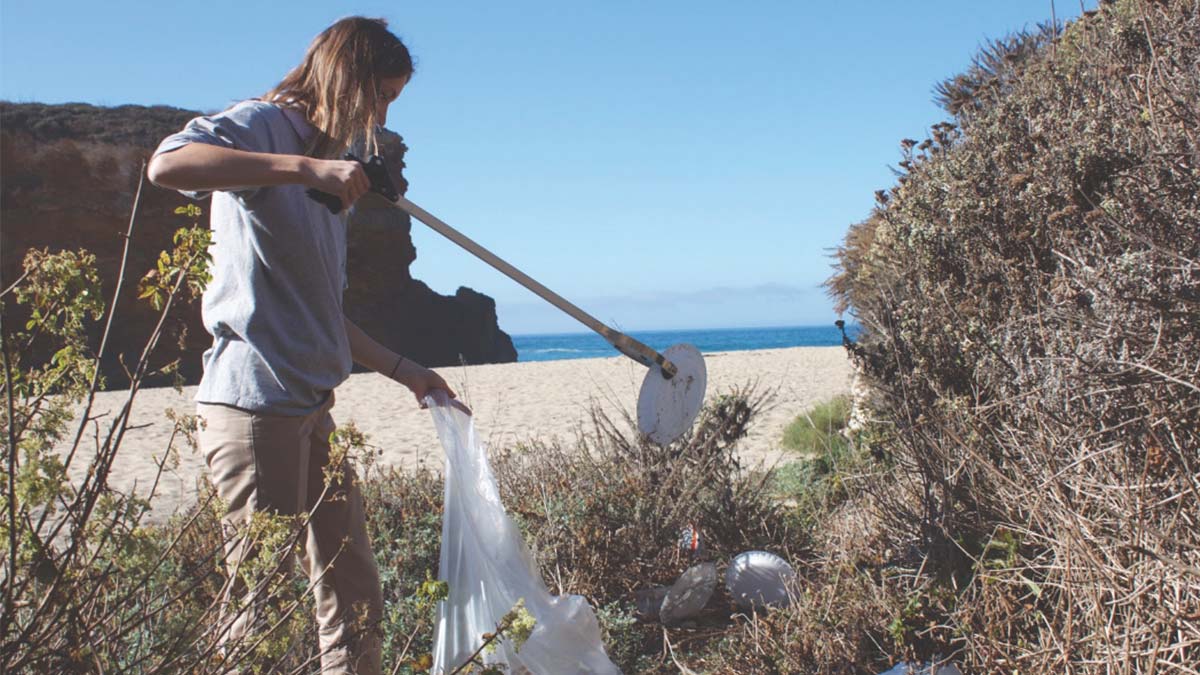 Filling garbage bags with trash, volunteers hover over the sand with extendable grabbers and scrub graffiti off of the sandstone cliffs at Panther Beach. Joined by two state parks employees, they amass piles of leftover garbage—glass bottles, plastic food wrappers, styrofoam cups, and cigarette butts. The rising tide rolls in slowly, an ominous reminder that trash left behind on the beach gets washed out to sea.

The volunteer cleanup on Oct. 1, California State Parks’ first at that spot, was the department’s latest effort to increase stewardship of Panther Beach, originally part of the historic Coast Dairies property. The 7,000 acres of stunning, once privately owned coastal land surrounded the town of Davenport. The Institute for Public Trust, which bought the property in 1998, donated most of the large inland portion of Coast Dairies land to the Bureau of Land Management in 2014, and some government officials from Santa Cruz County all the way up to the Obama administration have been working on a possible plan to make the land a national monument—a move that concerns many neighbors. The institute donated the beaches to the California State Parks in 2006.

Even though parks maintenance crews clean Panther Beach along with other state-owned beaches in North County on a regular basis, the trash keeps piling up.

“Though we do have law enforcement regularly patrolling Panther Beach now, it’s still totally trashed,” says Lin. “The steep topography of it discourages some people from hauling their trash out, because it’s a heavy slope, and the seclusion provided by the cliffs gives people the idea that they’re in a private spot, and so they don’t make the kinds of decisions they might make if they were more exposed.”

Save Our Shores, a nonprofit that has worked to preserve the marine environment in Santa Cruz for more than 30 years, runs frequent beach cleanups throughout the county. According to Ryan Kallabis, spokesperson for Save Our Shores, volunteers and team members have picked up 7,072 pounds of trash this year alone at North County beaches, mostly near Davenport Beach, preventing all that litter from entering the ocean. The parks department is helping to ramp up the fight to keep Panther Beach and other North County beaches clean and safe by inviting volunteers to its ongoing cleanups.

As some politicians and outdoor enthusiasts push to have the remaining Coast Dairies property converted to a national monument, many Davenport residents worry that any increase in traffic to these sensitive habitats could pose a hazard to small ecosystems.

The state has a far-reaching California Coastal National Monument along its beaches. But Noel Bock, leader of the Davenport/North Coast Association, says it’s important to note that the Coast Dairies beaches would not be included in that national monument or the local one, because they are already owned by the state parks department. That means, she fears, that the droves of people who might come to visit the proposed Coast Dairies National Monument will spill over onto beaches, which won’t receive an increase in funding or protection.

Chris Spohrer, acting superintendent of the Santa Cruz District of California State Parks, says the trash is already a problem because the North Coast beaches get so many visitors. But Spohrer, who is spearheading an effort to introduce more cleanups to Panther Beach, doesn’t believe the proposed National Monument would bring in a new influx of tourists and pollution.

The number of visitors streaming into some of the more hidden Santa Cruz County beaches has skyrocketed in the last few years, and he says the beachgoers have been hearing about the coastal hangouts through social media. It’s been difficult, Spohrer adds, for officials to respond quickly enough with new staffing levels and facilities.

“It’s such a special place that’s getting so much abuse from people that aren’t appreciating it like they should,” says Spohrer, who has also launched efforts imploring beachgoers to take stewardship and look after the places they visit. “It’s time that we stretch ourselves and reach out to the community to see how we can steward the beach more actively.”

Spohrer, unlike previous superintendents, comes from an ecology background and has a unique perspective. “He’s taking a broader look at the State Parks to assess what needs to change,” Lin explains.

Ryan Diller, a forestry aid in the State Parks, says a lot of departments work together in order to make a Saturday clean-up happen, like labor and providing trucks for hauling out trash. Law enforcement helps by sand-blasting graffiti.

“Even though the State Parks acquired the Coast Dairies land 10 years ago, we haven’t necessarily had the funding to support an increase in management,” Diller says. “Chris has been really good at finding ways to fund things that in the past have never had funding. We want to the public to know that we are listening, and we are working for them.”

Ongoing cleanups through the State Parks will happen quarterly at Panther Beach and are open to the public. The next clean-up is scheduled for 9 a.m. on Jan. 7. Additionally, Save our Shores hosts a beach cleanup at Davenport Beach on the first Sunday of each month. Meet in the parking lot at 9 a.m. to join in the efforts. Save our Shores also hosts beach clean-ups at all North County beaches throughout the year. Check their calendar at saveourshores.org for details.