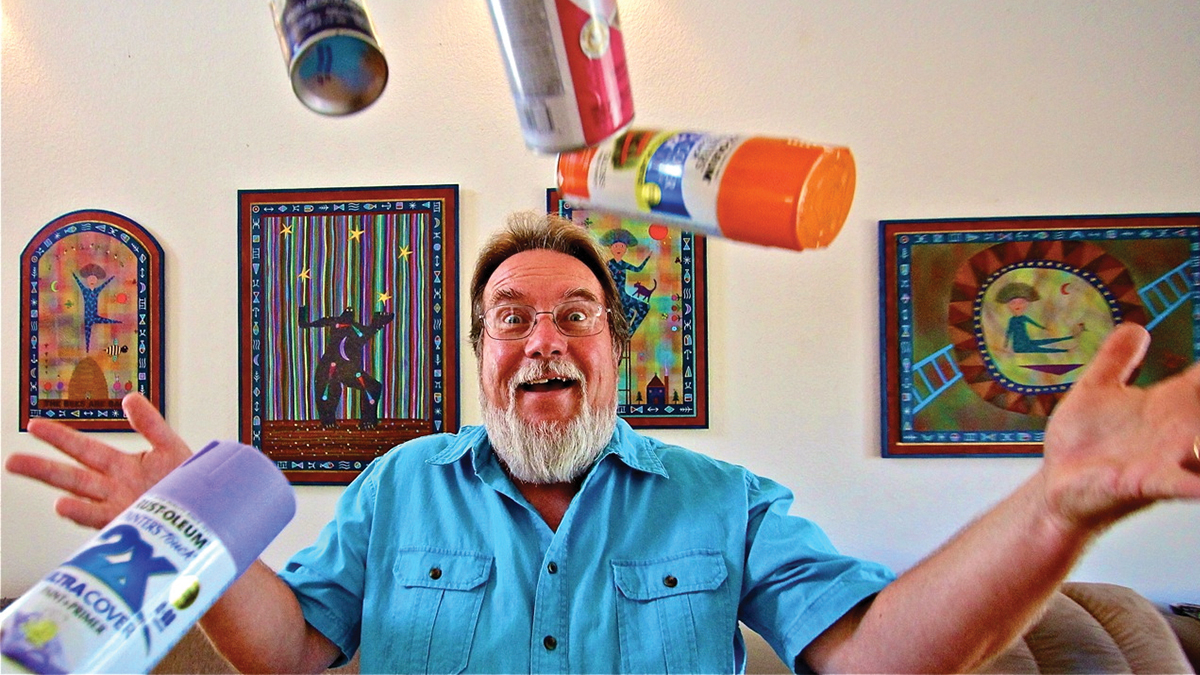 [dropcap]I[/dropcap]n the first half of his adult life, he sold heroic tales from behind the counter at his Santa Cruz comic book shop. In his next chapter, though, James Aschbacher played the hero’s role himself.

Sure, “hero” can be a glib, grandiose term. And, yes, it feels good to apply as a salve to the wound of shock and grief when a friend dies unexpectedly, as Jim did last week after a stroke.

But in this case, with this ebullient and generous man, there’s no other term that fits as well.

He’s a hero not because he was a nice guy—in fact, he was several degrees beyond “nice;” consistently upbeat, unfailingly kind and compassionate, and effervescent with good humor, with a loyalty to his community, his friends and especially his wife Lisa Jensen, my Good Times colleague, that was as dependable as the sunrise.

That’s the Jim Aschbacher everyone has been talking about since the awful news broke. That’s the man whose absence the Santa Cruz art community will struggle to absorb for years to come.

But here’s the real reason he’s a hero: He made of his life something that, for most of us, remains the stuff of Sunday afternoon daydreams. He took an audacious turn at mid-life, followed an unlikely dream and became astoundingly successful at it. For the courage, the moxie and the abiding faith it took to do that, Jim earned his superhero cape.

Originally from Chicago, Jim was known throughout the 1980s as the co-proprietor of Santa Cruz’s comic book emporium Atlantis Fantasyworld, with his partner Joe Ferrara. After the 1989 earthquake all but destroyed the business, Jim decided to sell his share to Joe, who went on to rebuild Atlantis.

Meanwhile, Jim did something crazy. On the brink of turning 40, he decided to become an artist—flat-footed, starting from nothing, having no formal art training or lessons. He admitted that, at the time, he couldn’t even draw a convincing stick figure.

Imagine the chutzpah it took to do such a thing—would I, in middle age, have dropped what I was doing to follow some quicksilver dream to become a country singer, or a magician, or an international chess champion? Don Quixote wasn’t even that quixotic.

But determination only gets you in the cockpit. It doesn’t get you off the ground. For that, you need a really good plan.

Jim’s first move was to develop his voice as an artist, and that first year, he attempted about 200 paintings to find his signature style. Today, anyone who knows the first thing about the work of James Carl Aschbacher can identify that style instantly. It’s a magical realm of stars, dolphins, and sea turtles, of serene human-like creatures that wouldn’t be out of place in a Miyazaki film. It’s a world of teal and ochre and emerald, bordered by fascinating glyphs that evoke the sea and the sky. It’s a style with no predecessors and no imitators. It’s pure Jim.

Once he found his artistic stride, Jim then tackled what might have been the most difficult of his challenges: connecting his art to the community. Whether it was a savvy move to create a market for his work, or just an extension of his generosity (or, probably, a little of both), he embraced public art and became Santa Cruz County’s busiest muralist (along with Jensen, his co-credited helpmate). Tourists, newcomers and long-timers alike have gazed at his 80-foot-long “Song of Santa Cruz” mural on Cedar Street on the Petroglyph building (that’s only one of two giant murals in downtown Santa Cruz alone; countywide, the mural count reaches close to 20).

Today, the art of James Aschbacher is as deeply entwined with the cultural imagery of Santa Cruz as that of any other artist. His distinctive style will remind us of the unique artistic legacy of this community even if his booming laughter and his Champagne toasts no longer can.

But it’s still a bitter trade.

Two months ago, Jim surprised me on stage at the Rio Theatre while I was hosting the Gail Rich Awards by giving me one of his originals, this one customized to reflect my own life. I cherish it. It will hang in a prominent part of my house for the rest of my life.

After the event, around the refreshment table, he cracked, with that devilish grin, “Hey, not everybody gets a free Aschbacher.”

That’s where you’re wrong, buddy. Whenever you and Lisa showed up to some local musician’s concert, or some artist’s gallery reception, or a theater opening night—which was just about every weekend of the year—whenever you lent support or advice to a fellow artist, a sympathetic ear to a friend, an invitation to dinner to an acquaintance, you gave to all of us directly what your art gives us indirectly.

It’s not only your beautiful art that will comfort us in your absence. It’s also the example you leave behind that following a dream doesn’t have to be some idle fantasy. And the proof is painted on walls from one end of the county to the other.