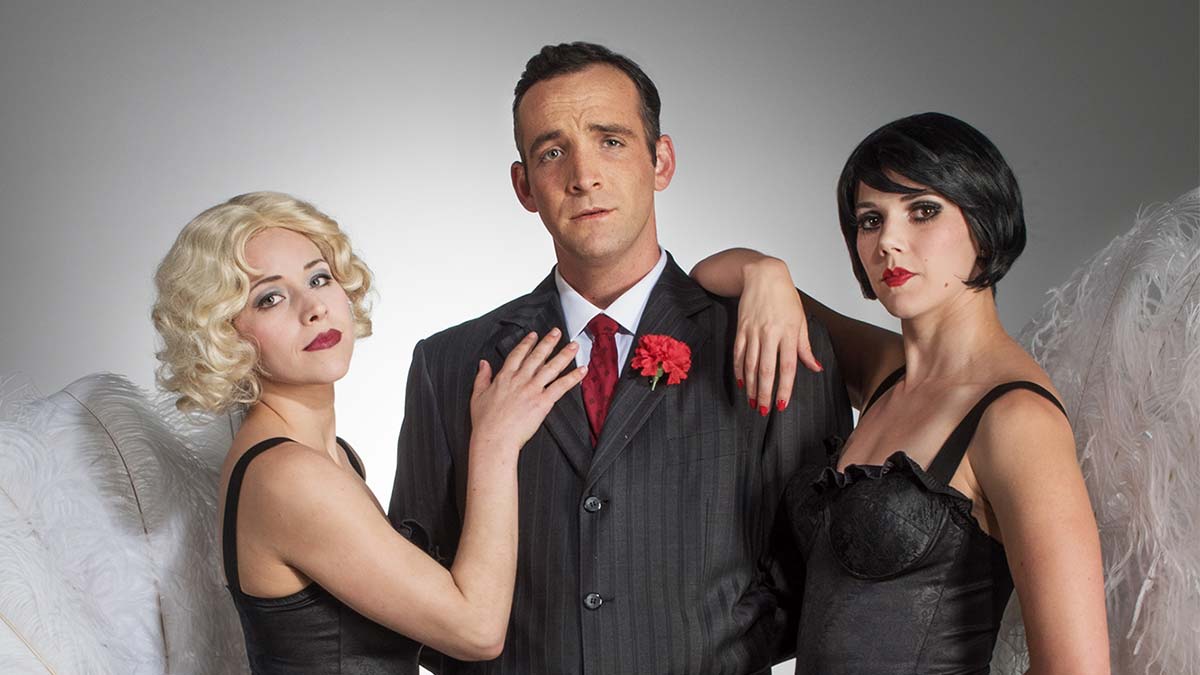 The razzle-dazzle didn’t always ignite on opening night of the new Cabrillo Stage production of Chicago. But despite a few miscues, the inaugural show in the company’s summer musical season mostly delivered the goods, in the ways we’ve come to expect from CS—a couple of outstanding performances, and a terrific corps of dancers.
A glitzy tale of crime, celebrity, and media in the Jazz Age, the show hit Broadway in 1975, with music and lyrics by John Kander and Fred Ebb (who collaborated on Cabaret), and choreographed by Bob Fosse, who also co-wrote the book with Ebb. The parallels to Cabaret are notable: both shows are presented on a nightclub stage, with a visible orchestra upstage and an emcee to introduce the numbers and set the scene. That most of the story in Chicago takes place in jail cells and a courtroom only intensifies the equation of crime and justice with showbiz.
The Cabrillo production was directed and choreographed by longtime CS stalwart Janie Scott. She locates the orchestra—a 13-piece jazz combo led with plenty of verve by Musical Director and keyboardist Mazera Cox-Goulter—in a balcony across the back of the stage, overlooking the action. A central staircase descending to centerstage, and a couple of side balconies and stairwells, complete Patrick Klein’s clean, functional set, on which the story plays out, in all its glamour and tart cynicism.
The show begins cleverly, with silent movie-style title cards on a white screen, with the usual requests to turn off our cell phones, etc. The screen falls away for the dynamic opening number, “All That Jazz,” featuring the entire company, led by Jessica Whittemore in the central role of Velma Kelly. Whittemore is the undisputed gemstone of this production, with her great voice, fearless dancing (especially in the one-woman duet, “I Can’t Do It Alone”), and her ever-insouciant attitude.
The opening number ends with a murder, when blonde chorine, Roxie Hart, shoots her boyfriend for two-timing her. Co-protagonist Roxie is played by Danielle Williams, who manages the character’s lightning shifts between tough cookie and innocent Kewpie Doll with brisk, comic dexterity. Roxie also has a loyal schlub of a husband who adores her, good-hearted, downtrodden auto mechanic, Amos. Dave Leon plays Amos with a mixture of hopeful pluck and resignation that wins the audience’s hearts over the course of the show.
Roxie almost gets Amos to take the murder rap for her, until he realizes she was cheating on him. The main story kicks in when Roxie goes to jail, joining Velma and her sextet of “merry murderesses” awaiting trial. (Their number, “Cell Block Tango”—better known by its recurring refrain, “He Had It Coming”—captures the show’s wry asperity.) The cell block is presided over by matron “Mama” Morton, played with panache by Danny Dwaine Wells II. The ironic duet, “Class,” that Mama sings with Velma is a highlight of the show.
In jail, Roxie falls under the wing of slick lawyer Billy Flynn, (a chipper performance from David Jackson), who famously gets his sexy (and guilty) clients acquitted by drumming up sympathy in the celebrity-obsessed tabloids, and employing “Razzle Dazzle” in the courtroom. Roxie’s rising media fame begins to eclipse Velma’s, and while the women are initially antagonistic, they establish their sisterhood in time for the big finale.
Reynolds is a crowd-pleaser as “sob sister” gossip columnist Mary Sunshine, although lyrics delivered in a startling operatic soprano are sometimes hard to decipher. And Nick Rodrigues is polished, exuberant fun as the versatile emcee, who also takes an occasional role in the story.
As for those opening night glitches, the house lights kept going up in the middle of the show, and while this problem was resolved in the second act, a spotlight was late coming on at a climactic moment. And Billy’s pinstripe suit pants suffered a wardrobe malfunction when he made his first entrance from behind a cloud of ostrich-feather fans. But the great thing about live theatre is that all these minor problems can be solved as the show goes on.

Info: The Cabrillo Stage production of ‘Chicago’ plays through July 10 at the Crocker Theater, Cabrillo College. For information, call 479-6429, or visit cabrillostage.com.

Next ArticlePreview: The Bills at Kuumbwa Jazz