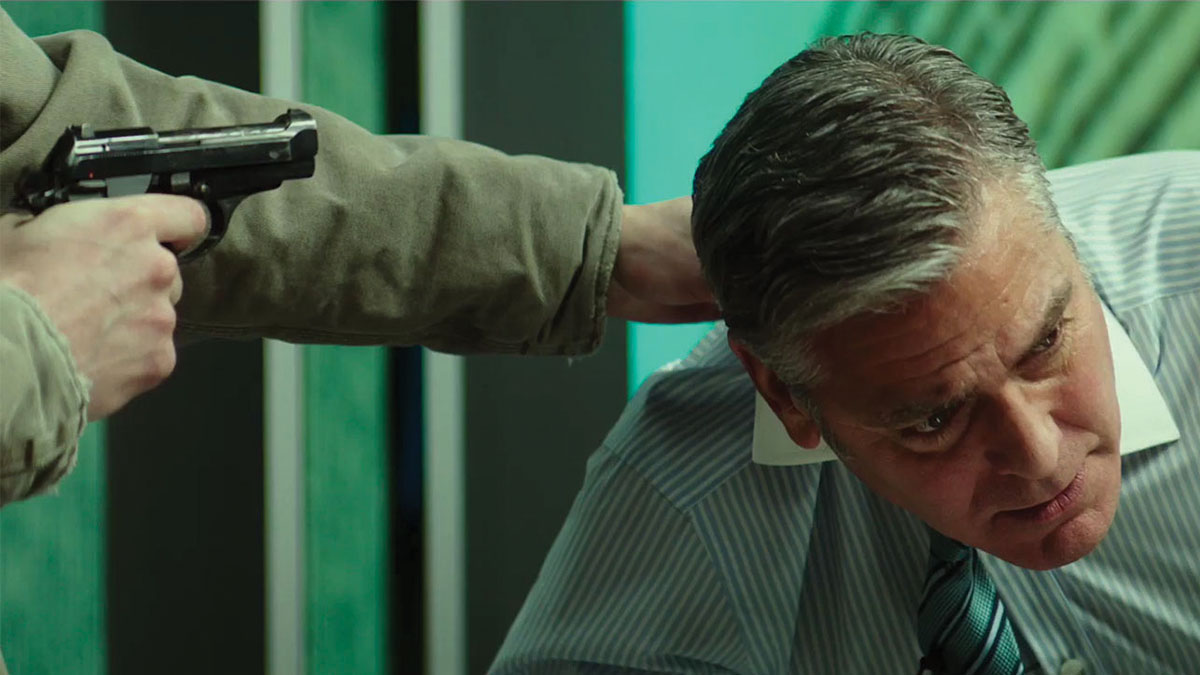 Remember in Network, when Peter Finch played that fed-up TV news anchorman? “I’m mad as hell, and I’m not going to take it any more!” was his rallying cry.
The news hasn’t gotten any better since then, and the media is more a focus for outrage than ever—especially in this era of “reality” television. All of which comes into play in Money Monster, a smart, fast-paced thriller in which a disgruntled Everyman, burned by the system, takes to the airwaves to vent his anger.
Written by Jamie Linden, Alan DiFiore, and Jim Kouf, the movie was directed by actress Jodie Foster—who has starred in enough thrillers by now to know what she’s doing. The narrative unfolds in real time (a fleet 98 minutes), not only in the New York City studio where a TV host is taken hostage—live, on-air—but in a couple of other key flashpoints around the world that turn out to be connected to the hostage drama.
George Clooney stars as Lee Gates, host of a financial advisory TV program called Money Monster. Lee is a showman; he doesn’t just advise which stocks to buy or sell, he drives home his points by donning a top hat and dancing with showgirls, slamming a giant red buzzer on his desk, or running a few frames of vintage monster movies to express his fear, or zeal, about the market. It’s all showbiz to Lee, barely held in check by his exasperated-but-forgiving director, Patty (Julia Roberts). “Your money better be faster than the other guy’s,” is his mantra.
One day, with the crew assembled for their live broadcast, Patty tells Lee that his interview guest, the CEO of a financial conglomerate called IBID, is a no-show, but they have an onscreen chat lined up with the company’s PR chief, Diane Lester (Caitriona Balfe, who plays Claire on Outlander). IBID stock has recently taken a dive, which company spokespeople are calmly blaming on a renegade computer algorithm—a “glitch.”
But the show has hardly started when a deliveryman sneaks backstage, and suddenly appears on camera waving a gun. He is Kyle Budwell, (Jack O’Connell), a little guy who’s just lost his life savings investing in IBID, and was hoping to get some answers from the CEO. But as long as he’s there, he forces Lee into a flak jacket loaded with explosives (Kyle holds the trigger), and makes him watch a video clip of last week’s show (called up on command by Patty in the control booth, so as not to make the gunman any more testy), in which Lee crows that investing in IBID is as safe as a savings account.
There’s plenty of blame to go around, with predatory, unregulated Big Banks routinely making a meal of small investors. But while Lee insists at first that he’s not the bad guy in this scenario, he begins to re-evaluate his role in the system. Meanwhile, forbidden to cut the live feed by Kyle, Patty sends everyone out of the studio except the camera and sound crew, while the NYPD surrounds the building—and assembles its best snipers.
The plot is full of ironic twists and emotional shifts that defy our expectations. We’ve seen a thousand hostage dramas where the gunman’s loved one is brought in to reason with him, but it plays out differently here. Lee’s attempt to play the star card and rally the support of his loyal viewers also has unexpected results. Diane’s feeble attempt to spout the party line in defense of IBID gets Kyle, Lee, Patty, and the whole crew incensed, then launches Diane into her own investigation into the shady activities of her boss, Walt Camby (Dominic West).
None of this narrative would be possible without the split-second technology that connects a programmer in Seoul, hackers in Finland, and strikers in South Africa, with Patty’s crew, as the live drama unfolds. The immediacy of modern technology is the fascinating subtext, where billions are earned, lost, or diverted electronically, and no one has to consider the messy human cost.

Previous ArticleRisa’s Stars May 18 — May 24

Next ArticleAmerican Music Festival Line Up