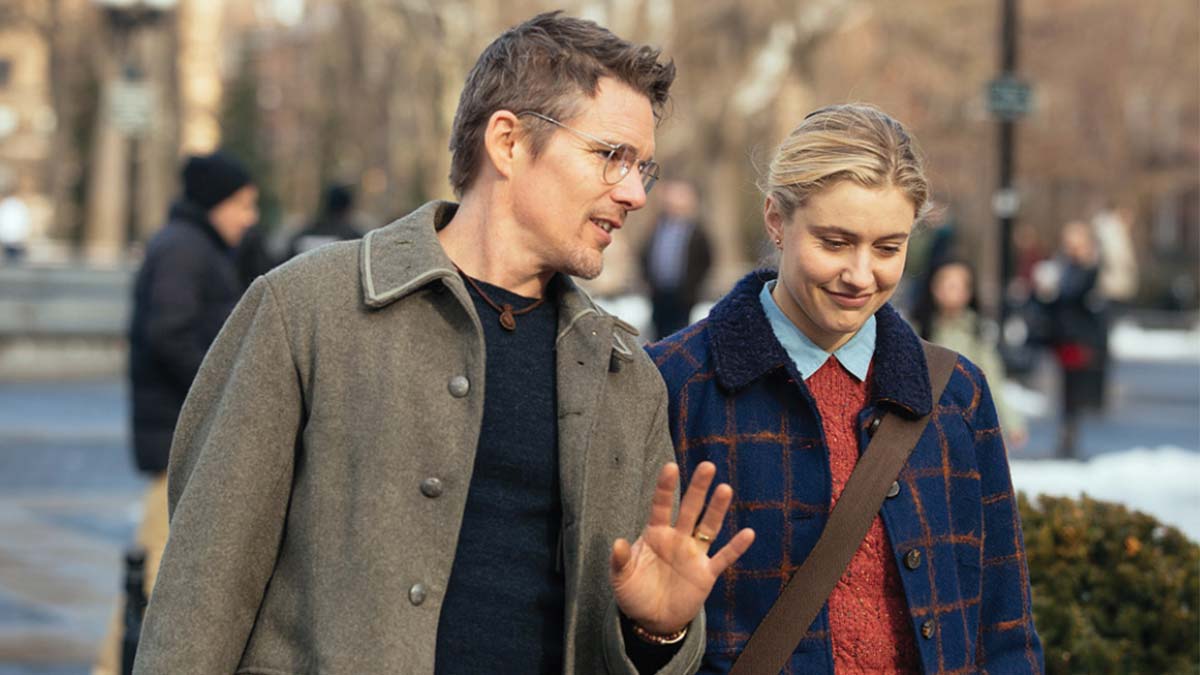 Maggie’s Plan in not exactly a romantic comedy. It’s not an anti-romantic comedy either, although it leans in that direction. There are romantic elements in the story, but they tend to be fleeting in this postmodern comic hybrid in which pairing up with one true love is not a necessary ingredient for a happy ending.
The movie takes place on the fringes of the literary/academic milieu of New York City that director Rebecca Miller (daughter of Arthur) knows so well. It stars indie-darling Greta Gerwig as Maggie, a sunny transplant from Wisconsin who teaches business classes to young entrepreneurs. Maggie borders on the so-square-she’s-hip category, tromping around Central Park in her penny loafers and plaid wool coat, and fawning over the child of her best friend (and ex-boyfriend), Tony (Bill Hader), and his wife, Felicia (Maya Rudolph).
Maggie’s initial plan is to have a baby of her own. But she can’t seem to stay in a relationship longer than six months, as she explains to Tony, so instead of waiting around to get married first, she’s opted for artificial insemination. With her typical efficiency, she’s even found herself a designated sperm donor, Guy (Travis Fimmel, from Vikings), who makes artisanal pickles.
But on campus one day, Maggie crosses paths with John (Ethan Hawke), an occasional guest lecturer, described by Felicia as “the bad boy of fictocritical anthropology.” Something of a minor rock star in his field, who has published several academic books, John is also working on a novel. When Maggie agrees to read the first chapter, and responds with enthusiasm, they start spending more time together.
John is married, with two kids, and his wife, famed Columbia lecturer, Georgette, is rumored to be a “monster.” Julianne Moore is very funny as Georgette, with her ferocious Germanic accent, the severe planes of her face emphasized by an upswept bun that comes to a point on the top of her head. John never acts like he has a problem with his wife’s success—until the night he arrives on Maggie’s doorstep in tears, to confess he’s in love with her.
This would be the finale in a traditional rom-com, but it’s just the set-up in this one. Flash-forward three years: Maggie is married to John, who’s still working on his novel—pretty much to the exclusion of everything else in his life. Maggie has the child she always wanted, a little, blonde, mini-me daughter she adores. She’s also bonded with John’s kids, who stay with them part-time. But, along with being the chief breadwinner, and day-planner (unless her plans conflict with John’s, when she has to defer to his schedule), Maggie has all the parental responsibility of taking care of the kids, and chauffeuring them around.
It’s a thoroughly modern arrangement that’s taking its toll on Maggie, now that she realizes how “self-absorbed” John is. (This is the all-purpose adjective with which everyone in the movie describes everyone else; in this insular community, who isn’t?) At a book-signing for the vitriolic novel Georgette has written about her breakup with John, Maggie and Georgette meet for the first time—and they start to get along. Which leads to Maggie’s next improbable plan: getting Georgette back together with John (and getting him out of her hair).
Fictocriticism is an academic discipline that actually exists, and while it sounds pretentious enough to have been invented for this movie, its merging of narrative story and critical theory also works as a sly metaphor for Maggie and her plans. She’s pretty sure she can arrange life much more efficiently, according to her theories, than waiting around for fate, but she’s consistently stymied when messy reality barges in.
Gerwig manages to be engaging, despite Maggie’s serial cluelessness; her relationship with her wisecracking friends feels warm and genuine. Filmmaker Miller’s satire of academia is tart and funny without being waspish. But Moore is the centerpiece here, both comic and emotional, a nifty transition guided by Miller with deft, forgiving aplomb.